Reclaiming My Identity: Why I Changed My Name Twice

Jessica Phoebe
Reclaiming My Identity: Why I Changed My Name Twice 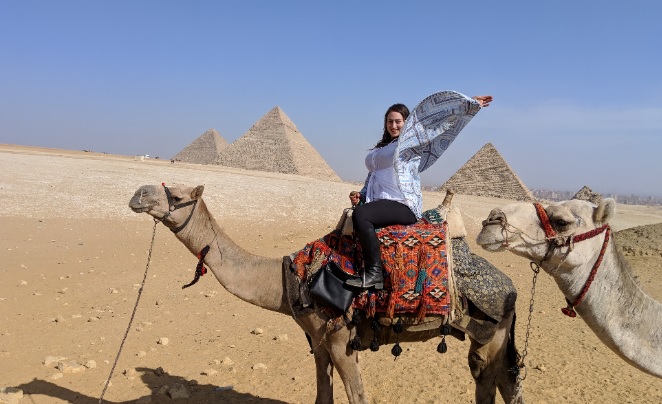 Being a first-generation Australian-born Egyptian is confusing. I grew up on Vegemite (Egypt’s closest equivalent is Mesh) sandwiches and Molokheya. I listened to Ehab Tawfik and Savage Garden. ‘Sheb-sheb’ was the standard word for ‘flip-flops’, which were used to swat both flies and my backside.

I spent many of my formative years near Sydney’s Northern Beaches. Surfing was part of the wider culture, while eating was part of my family’s. While I loved the sea in all its splendor (I’m a Pisces), I could never stand up on a surfboard.

Luckily, I did not have to withstand this identity dissonance for long. After moving to a school in Western Sydney, my friends became more diverse and our activities ventured beyond watersports. Something, however, was still missing.

I never felt I truly fit in. I was still uncomfortable asserting my Egyptian identity to my non-Egyptian friends. I felt I still needed to show that I related to them, referencing movies they knew, rather than teaching them about my Egyptian-influenced taste in the arts. This, unfortunately, continued well into my adult years. Not realizing how important having a solid identity was, I continued on with my life, completing my master’s degree in Science/Psychology and working in that field. Things were going swimmingly (no further water references intended).

Swimmingly, that is, until my quarter-life crisis. Laugh all you want – this was serious. I went on meditation retreats. I took up jazz and ballet. I went to acting school. I tried Muay-Thai. Nothing worked. I was still very confused. So, I decided to change my name. That’ll fix it.

After weeks of agonizing over options, I narrowed it down to the following: Jessica Knox, Jessica Meadow, Jessica Ainsley, Jessica Haven, Jessica Faye and Jessica Blaise.

I felt embarrassed asking my Egyptian-Australian friends’ opinions on my identity change, so I took to asking my friends from acting school who responded positively: “You look like a Knox!” “Knox is so you.” “Oh my God, Knox knocks your socks off!” “Do you want to be Blaise or Blasé? Blaise it is!”

I opted for an amalgamation. Phoebe, my mother’s name and Knox “knocks your socks off”. Jessica Phoebe Knox – done. However, the more I progressed with this name, the less myself I felt. It didn’t have the same empowering effect the name Freddie Mercury from Queen had on Farrokh Bulsara.

I believe the reason was partially because of the relationship names have with identity. Whilst traditionally, parents name their children, it can be argued that people have a right to change their names. So, I did. I used my newfound, watered down, trying-to-fit-in, white-washed identity on my website, business cards and movie credits.

Things were going fine. I was slowly accepting my new acting and film-making identity. That is, until I visited Egypt for the first time in January this year after being invited by the Egyptian Minister of Emigration, Nabila Makram. The 12-day “National Identity Awareness” trip for 1st and 2nd generation, Australian-born Egyptians was about seeing and experiencing our roots.

This trip raised many questions about identity for me, particularly about my new name. Why is it that I struggled so much to identify with it? Isn’t it just a name? It could give me a special stage persona enabling me to switch between my normal and my superstar identities! I chose this name – why was it not resonating with me? I had a right to choose my own identity, and I did – what was the problem? I’m sure I wasn’t the first person in history to feel this, right? Freddie Mercury was born Farrokh Bulsara and he seemed more than fine with it!

I guess it perhaps comes down to several factors, one being the composition of a name. Parents fight and agonize over names, but our surnames are inherited, passed down through generations, forming part of our history. Whether our surnames are from our father’s or mother’s side – they are all important and meaningful in forming who we are.

Another important consideration is how names are perceived and received. Names allow us to draw inferences about one another. They form the world’s first impressions of us, and as a result influence not only how we are perceived by others, but how we see and present ourselves to the world.

Whilst many celebrities, including Freddy Mercury, can adopt a separate identity through their names, enabling them to “break free” from an identity which may oppress them – for me as a first-generation Australian-born Egyptian – my name is integral to my identity.

Rami Malek discussed this in his recent 2019 Oscar-Winning speech. A child of immigrant Egyptian parents in America, Rami struggled with his identity. He suggested that the world longs for stories like ours – our own unique immigrant experience.

Whilst it is true that our parents give us our names, how we truly identify can only come from us. Owning and reclaiming my Egyptian identity through my name allows me to proudly assert myself as a diaspora youth in a predominately white western society, rather than being a means of oppressing me. It enables my people to have a voice in an increasingly white-washed world – a world where People of Colour (POC) are overwhelmingly underrepresented in media and essentially hidden. Importantly, it provides me with the perfect balance between my own and my people’s identity – enabling me to identify and relate to a group, yet use my identity the way I like.

After years of paining over my name and with all these considerations in mind, I have decided to stay true to my original identity, and as an advocate for women, acknowledge the female lineage in my family. So, here it is: Jessica Phoebe Hanna. Jessica from my parents, Phoebe, after my mother, and Hanna, one of my father’s names.

Is Feminism Compatible with Egyptian Culture?
Somebody to Love? Rami Malek Without Freddie Mercury

Somebody to Love? Rami Malek Without Freddie Mercury
Is Feminism Compatible with Egyptian Culture?