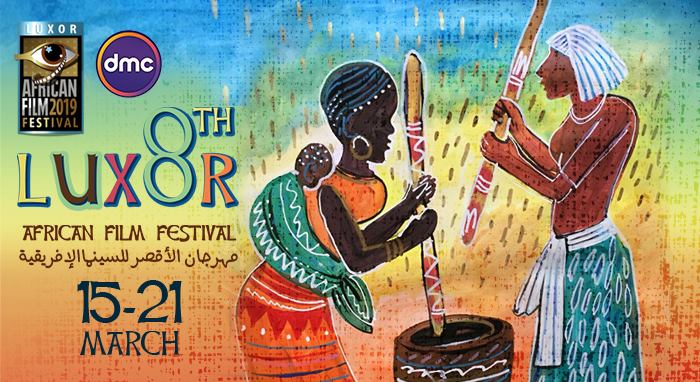 The Luxor African Film Festival is launching its 8th edition, which will take place from March 15th until 21th 2019.

The Luxor African Film Festival is organized by the Independent Shabab Foundation (ISF) with the support of the Ministries of Culture, Foreign Affairs, Tourism, Youth and the National Bank of Egypt in cooperation with the Luxor Governorate and the Film Syndicate.

The festival’s slogan is “Cinema, Many Lives to Live” reinforcing the succession of frames on the film reel, which are turned into characters’ lives, with whom the audience lives through and interacts with.

Artist Mohamed Abla, designer of the poster, declared that the idea of his work was to depict a simple image which highlights the value of the work of women- great contributors to civilization- in rural areas. Thus, he chose a scene which gathered an Egyptian peasant and an African peasant in their daily ritual.

The poster is drawn in cheerful and shrill colors which symbolize optimism. As for the motives, they reflect the details of our common stories.

Luxor African Film Festival events will begin on March 10, 2019, with a film production workshop under the supervision of director Saad Hendaoui.

With the honorary president of the 8th edition actor Mahmoud Hemida, for the first time, the International Federation of Film Critics (FIPRESCI) jury will be present at Luxor African Film Festival. The juries will be Klaus Eder (German critic), Ramy El Metwaly (Egyptian critic) and Djia Mambu Nlandu (Congole critic).

The festival is considered as the second Egyptian festival, besides Cairo International Film Festival, to have a FIPRESCI jury.

The festival will include more than thirty films who got nominated to compete under the festival’s five main categories which are: long narrative films, long documentaries, freedoms, short films and, national student films.

Morover, it will be honoring the Egyptian actor Asser Yassin for his film “Born to Be a Man”directed by Karim El Sobky, Lebleba for her film “A Hot Night” directed by Atef El Tayeb and, the Tunisian producer Doura Bouchoucha for her film “Dear Son” directed by Mohamed Ben Attia and much more.

For the festival official selection films out of the competition, five Egyptian films got nominated which are; “Immobilia Crime Story” directed by Khaled El Hagar, “Poisonous Roses” directed by Ahmed Fawzi, “The Giraffe” directed by Ahmed Magdy and “Youmeddine” directed by Abu Bakr Shawky besides another ten films from Morocco, Algeria, Tunisia, France, and Germany.

As for the country guest of honor, Tunisia was chosen for this year’s edition. The honoring program of Tunisian cinema includes eight of the greatest titles of the Tunisian national film industry, including; “Man of Ashes” by Nouri Bouzid, “The Magic Box” by Ridha Behi, “Wanderers of the Desert” by Nacer Khemir, “Hedi” by Mohamed Ben Attia.

The festival will also include a “STEP Long Documentary Development Workshop” led by producer/director Jihan El Tahri, the workshop aims to develop the storytelling and structure of selected projects from Algeria, Cameroon, Egypt, Rwanda and, Togo.

Lastly, the “Local Community Development Program for Talents in Upper Egypt” will conduct a selection of arts workshops in acting, screenwriting, storytelling for children, and animation.