Cairo is a city in which millennia of Egyptian history are woven into the fabric of modern daily life, and where history and tradition inform and shape the lived experience of every Cairene. It is also a city where an ancient legacy bumps up against new technologies, the winds of social and political change, and the ebb and flow of economic stability – a city in which its citizens must navigate the intersection of tradition with modernity, and the interface between historical memory and present-day concerns.

Nowhere is this more apparent than in the workshops of Cairo’s traditional artisans, who carry on the traditional arts and crafts of the generations before them, while adapting to a changing sociocultural and economic landscape. In The Tentmakers of Cairo: Egypt’s Medieval and Modern Appliqué Craft, Seif El Rashidi and Sam Bowker present a wide-ranging study of one of Egypt’s traditional crafts, the Egyptian appliqué work known as khayamiya (from khayma, Arabic for tent) and showcase the stories of the skilled artisans who struggle to preserve this uniquely Egyptian art.

There has been very little research attention to khayamiya prior to the publication of this work, and the authors, in working to fill this void, have brought together an almost overwhelming array of information.

While the bulk of the text is devoted to a broad historical survey of the tentmakers’ art, there are also chapters exploring the influences of khayamiya on Western artists such as Henri Matisse, the intersection of the craft of the khayamiya with the trade of the farrashin (tent erectors), and the design and manufacture process of modern-day khayamiya. The reader is left with the feeling that several books were being written here, or possibly that more are to come.

From Architectural Textile to Decorative Art

The theme that emerges from the authors’ historical chapters is the close aesthetic relationship between khayamiya and architecture throughout much of the textile’s history, until the colonial period and the rise of decorative khayamiya. The authors establish the important role of tents in Egyptian social, cultural, and political life from as early as the Fatimid era.

Though no examples of Fatimid and Mamluk era tents have survived, El Rashidi and Bowker effectively reconstruct the appearance and function of these tents via the writings of Egyptian chroniclers such as al-Maqrizi and Muhammad Ibn Iyas.

Surviving examples of Fatimid and Mamluk textiles allow the authors to establish the existence of the tentmakers’ appliqué craft from as early as the late Fatimid era (30-33). Most notably, the authors demonstrate how the “architectural textiles” of Mamluk and Ottoman era tents paralleled the artistic motifs of contemporary permanent architecture (see, for example, pages 35-38 and 58-61), a feature of Egyptian tentwork that would persist into the Khedivial period (83-85).

The rise to power of Muhammad Ali and his successors led to the greater formalization of the government’s administrative functions and bureaucratic structure, with direct impacts on the tentmakers. The authors note, for example, the commissioning of a state-controlled tentmaking operation to supply the Egyptian army, an event which surely impacted the dynamic of the khayamiya craft (74-76).

While some tentmakers would have been focused on production for the army, the remainder continued to produce tents for their other uses, including decorative ones, and El Rashidi and Bowker posit that this may mark the beginning of the applied decorative art of tentmaking as it exists today (75). Though tents from Muhammad Ali’s Egypt have not survived, the authors are able to demonstrate that decorative elements introduced in this period persisted in the tentmakers’ art of the next century (78-79).

The khedivial period witnessed the flowering of an epigraphic tradition in Egyptian tentmaking (94-106). From the 1860s through the 1920s, khayamiya included calligraphic renderings of Arabic epigrams. The khayamiya epigrams were frequently derived from Arabic poetry; however, the authors also note that many epigrams include references to Egypt, and some epigrams may have been borrowed from contemporary Egyptian songs in the colloquial dialect (99-101, 104).

This assertion of the local and the colloquial is especially significant, given the social, cultural, and political dynamics of the period.

The increasing European presence in Egyptian life throughout the nineteenth century, culminating in the British occupation, brought about seismic shifts at all levels of Egyptian society. Under foreign occupation, and confronted with waves of foreign tourists, Egyptians were confronted daily with profound differences in cultures, aesthetics, and values.

Importantly, this was a time of growing nationalistic sentiment, as Egyptians struggled to define and assert their identity while interfacing with nontraditional, foreign influences. As the authors point out, the turn of the nineteenth and twentieth centuries witnessed a flurry of investment in Egyptian and Islamic cultural heritage (85-88) and a resurgence of interest in traditional Egyptian (particularly Mamluk) art and design motifs (the authors note the emergence of Ilhamiya School of Arts in 1911) (91-94). Yet, alongside these assertions of tradition, Egyptians were actively embracing European technologies, architectural design elements, and more. 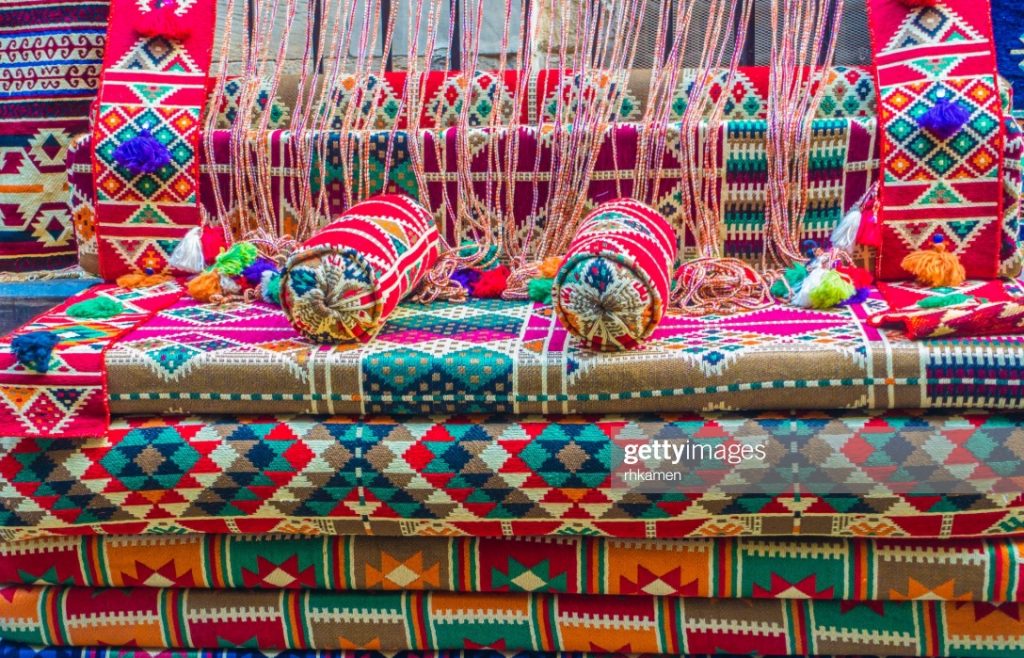 El Rashidi and Bowker illustrate how these complex social processes manifested in changes in the turn-of-the-century khayamiya craft. Around 1900, alongside the khedivial-style khayamiya that had emerged earlier in the nineteenth century, the tentmakers began producing a new style of khayamiya specifically for the tourist market (107-30). The most fundamental difference between these two styles of khayamiya was in function: for while the khedivial khayamiya remained an “architectural textile” like the tentwork of centuries past, the new touristic khayamiya was strictly a decorative textile.

Beyond this functional difference, the new style incorporated pharaonic design elements that were of appeal to foreign consumers, while foregoing the Arabic calligraphy so common in the khedivial style. Yet, as El Rashidi and Bowker note, the distinction between the two styles is not always cut and dry, with some khedivial khayamiya incorporating touristic elements, and vice versa (110-11, 126-29). Moreover, the production of khayamiya for the tourist market did not somehow lessen the authenticity of the craft; as the authors state: “Tentmakers continued to work within the authentic principles, materials, and techniques of their highly skilled profession, but towards the production of radically revised objects (130).”

From the early twentieth century to the present day, tents have remained a significant part of ceremony and celebration in Egypt, and the tentmakers have continued to provide khayamiya for these occasions, while also producing decorative khayamiya for the tourist market. However, the production of large-scale handmade appliqué panels has become cost prohibitive, and since the 1970s, factory-printed fabrics bearing khayamiya patterns, and in more recent times, computer-printed fabrics, have largely replaced the traditional fabric (it is worth noting that it was one of the tentmaker families that originally created the screen-printed khayamiya fabric) (177-79). Ironically, it is the tourist khayamiya that continues to be produced in the traditional manner. Still, when imitation khayamiya is used for constructing tents, it is the tentmakers who stitch this fabric to a canvas backing and add the necessary trim and ropes to allow the tent to be erected.

From the Local to the Global

In discussing present-day khayamiya, the authors detail the design and manufacture process of today’s tentmakers (161-86). They also reveal how the tentmakers have found a new platform for exhibiting and marketing their work: the international quilting community (173-77). Further, the authors note the increased visibility of khayamiya through collaborations with international architects, designers, artists, and illustrators (180-83). These discussions of khayamiya in the present-day raise questions that may prove fruitful directions for future research.

Though the tentmakers are overwhelmingly male, it is clear that the workshops increasingly farm out some of their work to women working from home; this is touched on briefly by the authors (172) and is mentioned by the tentmakers themselves in interviews (199-200, 204, 214). Though these women remain largely invisible in the trade, it would be interesting to explore what impact they are having, if any, on present-day khayamiya design and technique. Also, mention is made of Gulf Arab demand for khayamiya (199, 208), and one wonders how and to what degree this demand is impacting the trade.

The Tentmakers of Cairo is an expansive and captivating history of an often overlooked traditional art, as well as a glimpse into what the future holds for this uniquely Egyptian craft. A series of black-and-white and vivid color illustrations bring the text to life, allowing the reader to trace the evolution of khayamiya design over the centuries. The thorough and well-researched history that the authors present through the bulk of this text, and its rich visual accompaniment, take on new meaning and poignancy in the book’s eleventh chapter, when El Rashidi and Bowker present a series of interviews with present-day tentmakers (187-222).

In hearing the voices of the tentmakers themselves, one is struck by the determination of these craftsmen to keep their tradition alive, while also being open to artistic innovation and exploration. The tentmakers continue to assert the Egyptian authenticity of their art, while navigating a global marketplace. In the words of tentmaker Moustafa el-Leithy: “But the point is not to produce more, it is about authenticity. That is why Naguib Mahfouz got the Nobel Prize. It is from going deeper into the local that you reach the global (196).” The tentmakers of Cairo continue to navigate a path between tradition and innovation, reaching forward into the future while holding firm to their deep and rich history.

Heather D. Ward is a Middle Eastern dance instructor, performer, and researcher based in St. Louis, Missouri, USA. As an instructor and performer, Ms. Ward specializes in Egyptian raqs sharqi. Her repertoire also includes Egyptian folkloric dance, including baladi, ghawazi, and sa’idi dance styles, as well as folkloric styles from the Levant and the Persian Gulf. As a researcher, Ms. Ward’s primary area of concentration is the transition from awalim and ghawazi dance styles to classical raqs sharqi at the turn of the 19th/20th centuries in Egypt, and she has written a book on this subject: Egyptian Belly Dance in Transition: The Raqs Sharqi Revolution, 1890-1930.