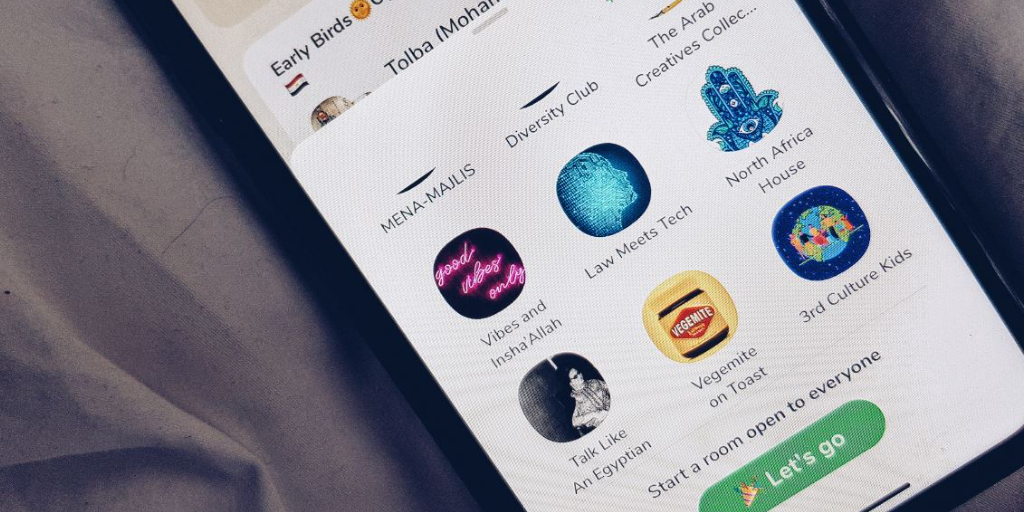 On Thursday morning, a daily Egypt ‘room’ on Clubhouse rocketed to 2,000 listeners, sparking joy and amazement among the Egyptian speakers in the room.

“I was honestly shocked and amazed. For a few seconds I wasn’t able to understand what was going on but the group of amazing people who were co-moderating did great job and handled it in the best way,” says Sherin Ewase, an Egyptian Clubhouse user who regularly schedules and moderates rooms for Egyptian users.

The room quickly shifted to discussions about Egyptian culture, food and travel destinations, with non-Egyptians invited to ask questions about visiting Egypt, Egyptian music and opportunities to live and work in Egypt.

Clubhouse is a social media application that recently hit the Egyptian market and is currently only available on Apple devices. The app, which is currently invitation-only, allows both friends and strangers to connect in ‘rooms’ and ‘clubs’ to listen in on various topics initiated by moderators and their guests. Anyone who enters a room can ‘raise their hand’ to be invited to the ‘stage’ to speak alongside the moderators and guests.

For Sherin, Clubhouse provides an opportunity for Egyptians to network with likeminded individuals and discover new professional opportunities.

“Clubhouse enhances the power of networking and gives them more access to people who they might not be able reach or even share information with others from different countries,” explains Sherin. 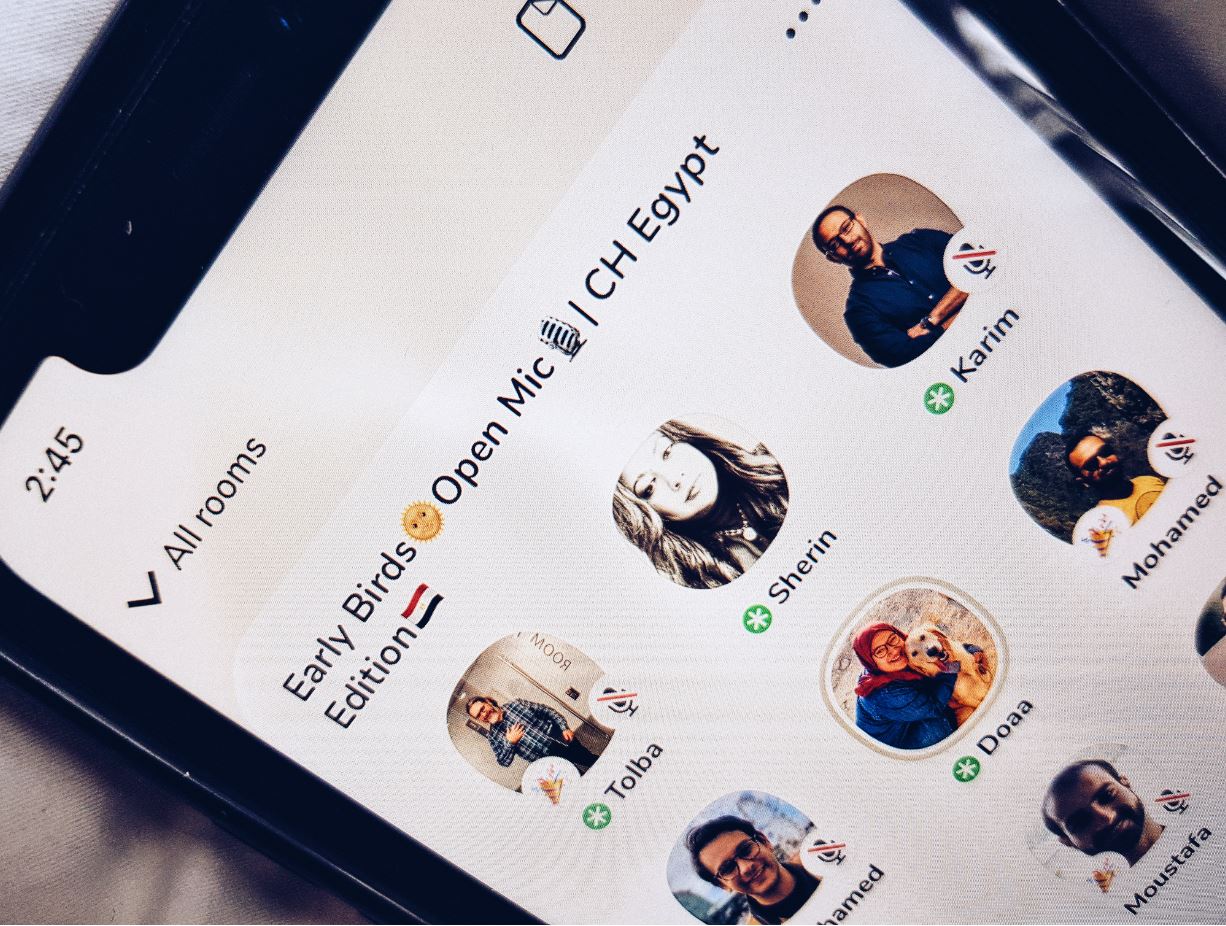 Ibrahim Abougendy, an Egyptian design entrepreneur who has been active moderating and participating in rooms on Clubhouse, believes that clubhouse has provided a space for entrepreneurs to shine.

“I think Clubhouse has provided a chance for all entrepreneurs (not just those favoured by established investors) to shine and network,” says Ibrahim.

“For me, it helped connect me with other star-ups, especially as someone who attends conferences to network. I have also managed to initiate discussions around sustainability in the Middle East and North Africa, something that’s often difficult to achieve. I didn’t imagine I would be able to find others across the region interested in the topic.”

Sherin agrees that Clubhouse can be a tool to highlight Egyptian talent, while also addressing stereotypes about Egypt.

“I think this social media network should be very well utilized to promote different things such as tourism, encourage people to invest more in Egyptian start-ups and talent and to battle stereotypes,” says Sherin.

“We’re not a group of shallow people who ride camels: Egypt has great minds and our culture and knowledge can add value and we’re capable of changing the world to be a better place.”

“It was not my first time singing live on social media. I’ve gone live on Facebook, Instagram and YouTube for a live concert during the pandemic, which was very new to me and life-changing. It was the first time to receive feedback on the spot…when you’re on stage you don’t always have this kind of interaction, it’s always very distant,” says Farrah when asked whether it was her first time performing to a large audience live on a social media app.

“Clubhouse encouraged me to hold a concert or something on it. The idea of it is much simpler than Instagram: you just create a room, you just invite people, strangers can enter who you may never have thought of being in contact with, and there’s plenty of musicians who are users and music activity that happens on Clubhouse,” continues Farrah.

“I think doing a concert on Clubhouse would be successful and I am planning to do this.” 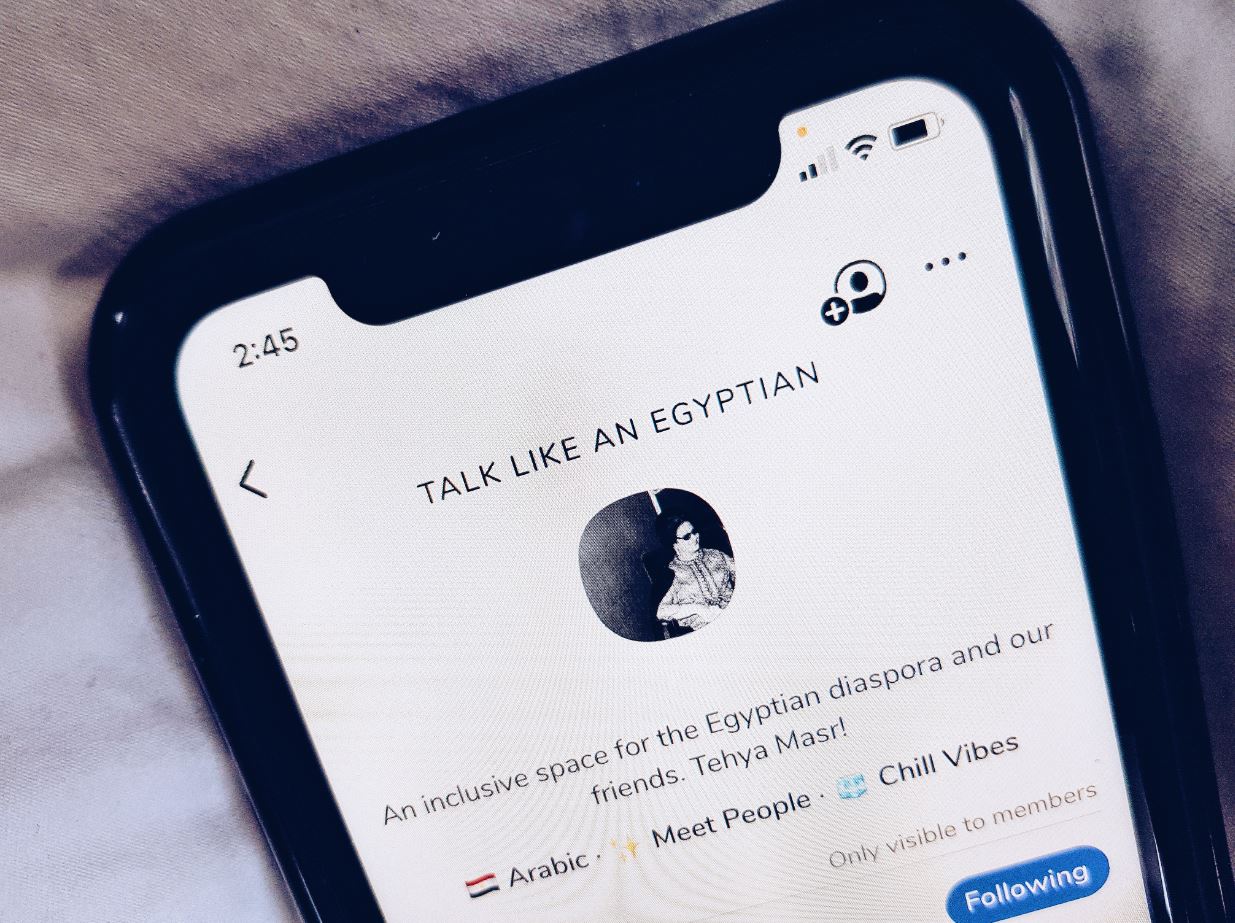 Apart from networking and promoting causes, Clubhouse has also been a space for people to connect based on their shared interests, cultures and identities. Clubhouse allows users to follow or join ‘clubs’ which are generally centred around specific topics: Movie Club, Arab Creatives Collective, Comedy Club, Diversity Club, Psych and Society and many more. One such club is ‘Talk Like An Egyptian’, described as “an inclusive space for the Egyptian diaspora and our friends”.

“Growing up in a small Illinois town, I didn’t know any other Egyptian Americans. I always felt like I was too American for the tiny Arab American community near me, and too Egyptian for a lot of my peers in school who weren’t minorities. When I moved to Chicago for college, I only met a handful of other Egyptians like me. In my experience, there’s not much of a strong diaspora presence for my generation in the Midwest. I always seek that type of connection to a cultural community because I never had that,” says Dena Khalafallah, the host of the ‘Talk Like An Egyptian’ club.

“I hope that the club brings the Egyptian diaspora together. I’d love to see people make new friends, professional connections and learn new information and insights from other members. And if any members meet their future spouse through the club, please name your eldest daughter Dena.”

For Ali Elabbady, also known as ‘Egypto Knuckles’ and the host of ‘Tacos & Tastemakers’ on YouTube, a club like ‘Talk Like An Egyptian’ has also been a space for progressive discussions.

“I joined Clubhouse near the tail end of December 2020. I was interested to see other groups to connect with likeminded SWANA/MENA artists, DJs, musicians, and writers alike, and I’m always looking for the cultural threads that connect us across the diaspora, so ‘Talk Like An Egyptian’ was one of the first clubs I joined right away,” says Ali.

“It has been awesome to see productive and progressive discussions happening in real time, it almost feels like the modern day Ahwa (coffee shop), sans the shisha and Turkish coffee.”

Dena agrees, adding that there are many discussions happening on ‘Talk Like An Egyptian’ that wouldn’t have otherwise been possible, especially during a pandemic..

“Any platform that allows diaspora communities to connect, unite and support one another is extremely valuable. There have been so many important conversations happening in ‘Talk Like An Egyptian’ that I don’t think we’d be able to have elsewhere.”

Connections during a pandemic 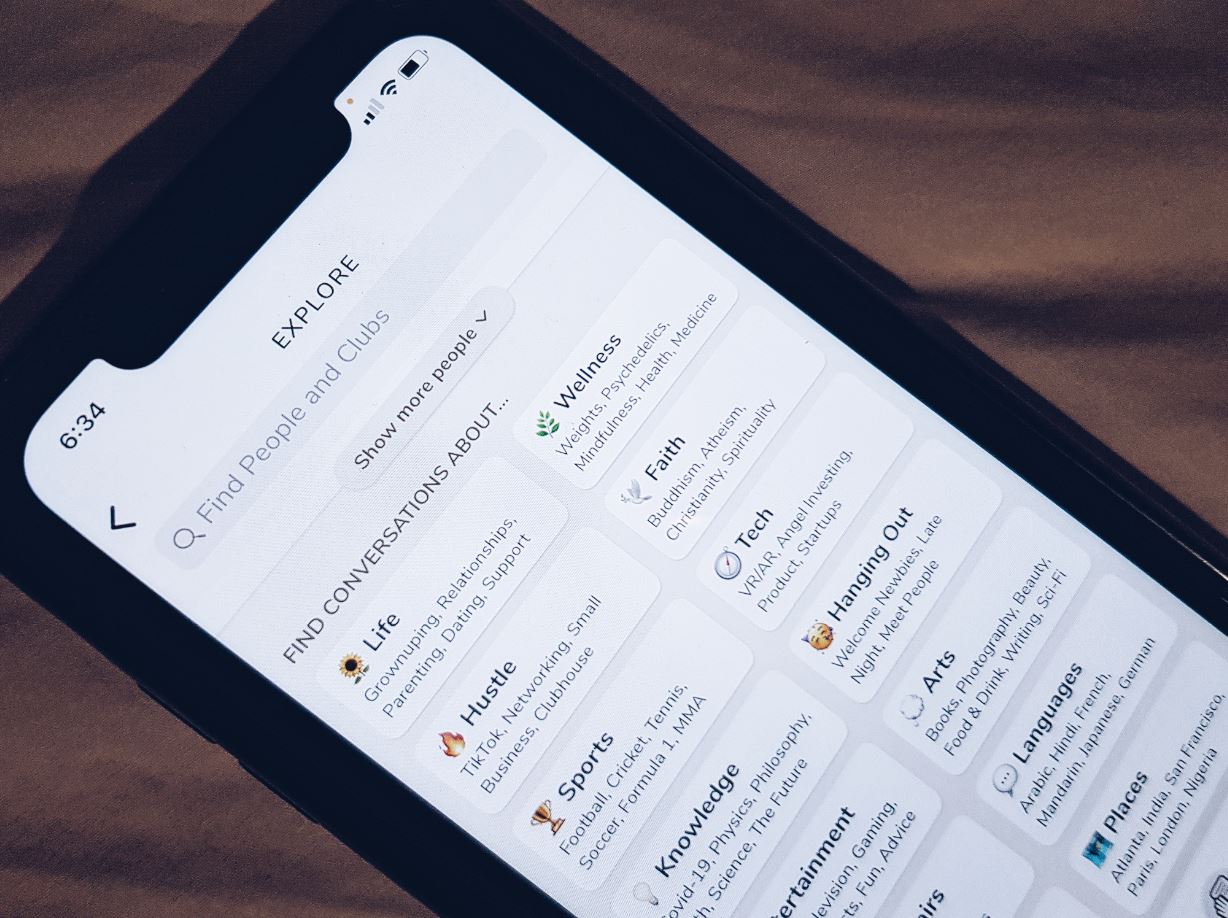 The reason for the success of Clubhouse has been discussed in both the media and on Clubhouse. However, one common factor that has often arisen in these discussions is the COVID-19 pandemic.

With access to public spaces being restricted, including live entertainment, Clubhouse has quickly become a tool to breakdown the walls of isolation.

“Since I’m a people person and Clubhouse supports me by giving me the ability to overcome the depression and anxiety of being quarantined alone. The chance to communicate with others and network is priceless,” says Sherin, who first joined Clubhouse right after falling sick with COVID-19.

Similarly, Ali believes Clubhouse has addressed a ‘starvation’ fuelled by isolation as a result of COVID-19.

“It’s really interesting how Clubhouse has connected us all through conversations during a period with intense isolation during a pandemic. I think we are all starving for discourse and conversation during the pandemic, [and] I appreciate the light-hearted rooms just as much as the serious rooms that are in clubhouse,” says Ali who has also joined clubs such as ‘New Jazz Listener’, which allows users to listen to performances by session musicians from across the United States of America.

“This pandemic is super difficult for everyone, so I hope the community in ‘Talk Like’ An Egyptian makes people feel less lonely,” says Dena.

“Mental health is so important and I wouldn’t want anyone to be in a dark place alone.”

Joining another social network though can seem like an extra burden. Farrah was initially sceptical about Clubhouse, telling Egyptian Streets she was not enthusiastic when she first received an invite from a friend to download yet another social media application.

“When I was invited to Clubhouse, I wasn’t very keen to join a new social network. However, my first impression was very positive; I really feel it is a very interesting app that allows me to meet people I don’t know and those I would never think I could meet or talk to,” says Farrah.

“It’s also easy; easy to use, it’s very straightforward without complications. Anyone can enter and speak…and it’s normal! People are very open and simple and I love this about it.”

Of course Clubhouse is not perfect. Users have complained about trolling, bullying and abuse in some rooms, in addition to the exclusivity of the social media network, all of which are points that require greater action by the Clubhouse team. The Clubhouse team, which hosts weekly rooms to discuss the latest updates, recently introduced the ability to report people for trolling. Moderators of rooms also have the ability to block abusive users from their rooms.

For the most part though, as numbers continue to grow, discussions on Clubhouse, particularly those within Clubs, have largely remained civil.

“For more than a week, discussions [in the Egypt Clubhouse rooms] have gone smoothly, with everyone showing a high level of respect and civility,” says Sherin, whose rooms are not part of a Club but are moderated by a group of dedicated Egyptians.

“Everyone has an equal chance to discuss their point of view.”

Ibrahim believes discussions have been civil because the audience has been selective.

“I don’t think that it will last long,” says Ibrahim.

“Especially because of the authority moderators can have over a room and the tendency of audiences to self-promote”.

For Farrah though, the community on Clubhouse has the potential to transcend self-promotion and to become a space used to promote art, culture and more.

“For example, it is very possible to promote Opera, which is not traditionally very accessible to everyone,” says Farrah.

“Promoting, or singing Opera, through such an application will really connect people, educate people and bring them closer to this genre of music.”

Whether Clubhouse continues to maintain a climate of inclusion and a safe space for various discussions and areas of interest as the number of users rapidly grows remains to be seen, but one thing is clear: Clubhouse has tapped into a craving people did not know they had while opening up plenty of opportunities to explore.

The fine print before joining Clubhouse 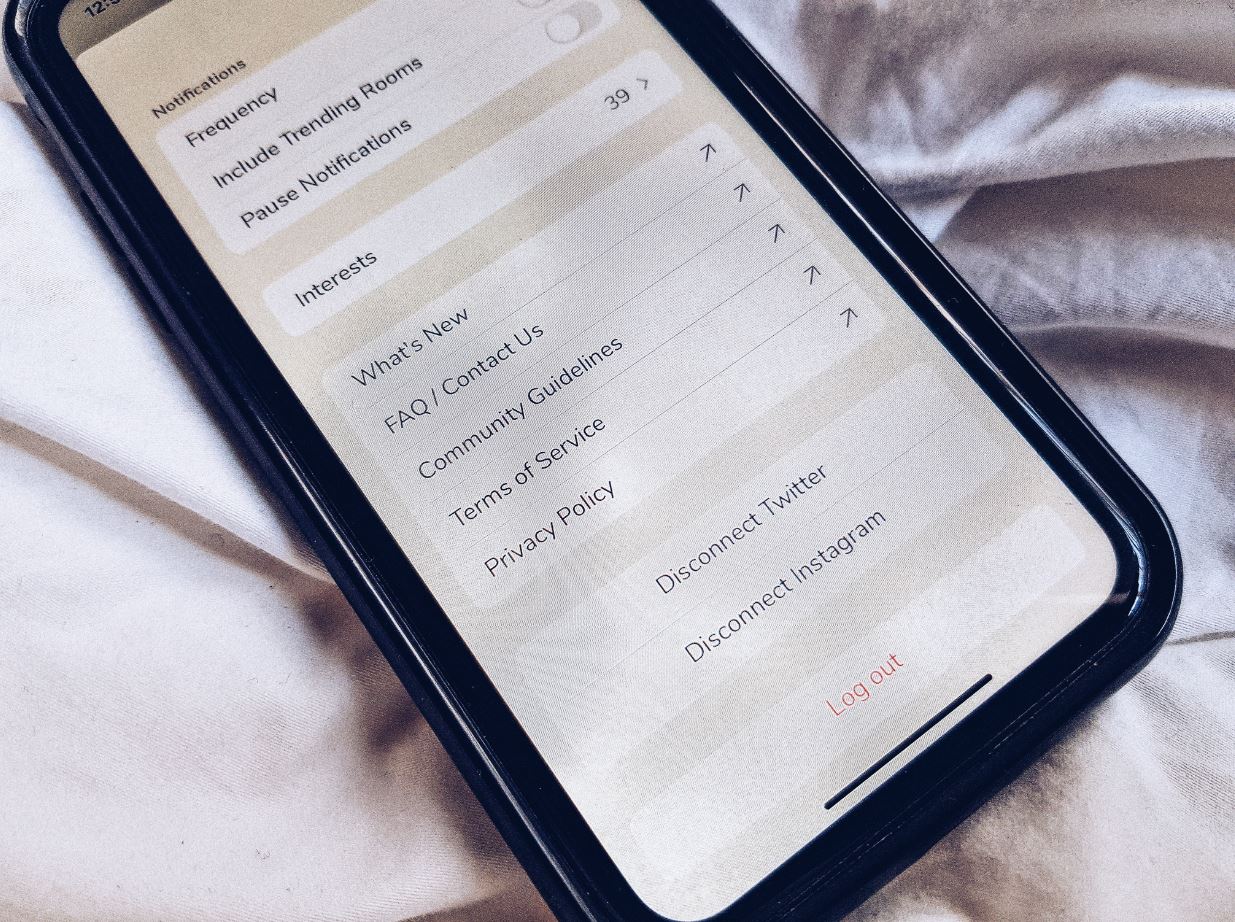 Before joining Clubhouse, there are a number of privacy and security factors to consider.

Secondly, there is currently no easy way to delete your account and its associated data on Clubhouse. Clubhouse’s privacy policy – which is only available in English – sets out that the only way to delete an account is to send a request via email to the Clubhouse team. The privacy policy does not set out how long it will take for a user’s request to be processed.

Thirdly, while it is against the rules to record conversations on Clubhouse, there is nothing to actually prevent anyone from recording a room’s conversation using another device. In some countries, where freedom of speech is stifled, some users have already expressed concerns that the application can be used by government associated agents to crackdown on dissent.

Clubhouse’s policies also set out that recordings will be made and stored by the team if a user reports a ‘Trust and Safety’ violation while a room is active. According to Clubhouse, these recordings are made “solely for the purpose of supporting incident investigations”, but whether any third parties may have access to these recordings, and the extent to which personal information is associated with the data, is unclear.