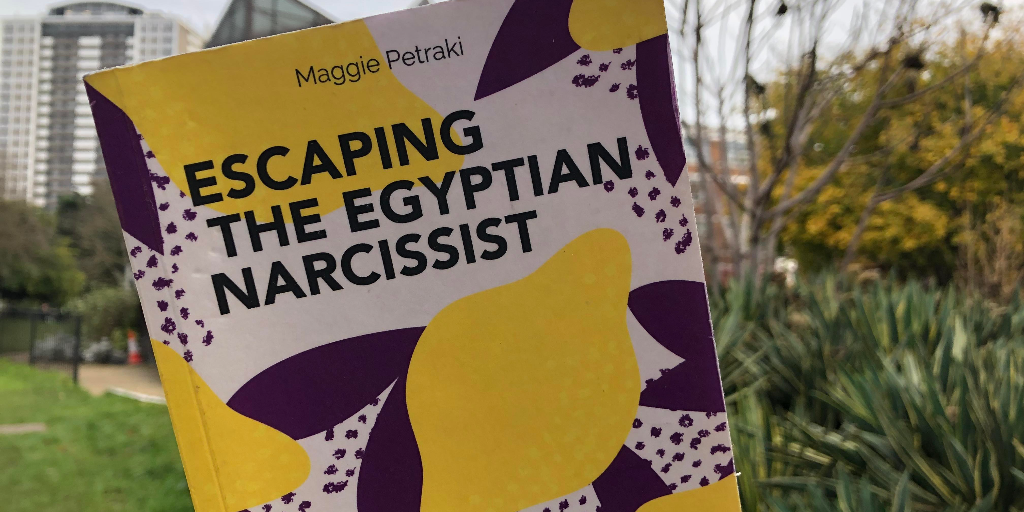 During the pandemic, catapulted by a general ennui and reminders that I was somehow thrown into further isolation through a lack of using social media, I finally downloaded Instagram. A few weeks in, I started noticing posts by a specific account in which narcissism, in an Egyptian context, was the focus point. Intrigued, I opened the page to find little quotes from a book, by Maggie Petraki, called “Escaping the Egyptian Narcissist. ”

Somehow, the book’s coming into my awareness was concomitant with the existence of narcissism in my life, as I reflect over past failed relationships. It seemed easy to find signs of narcissism everywhere – from my male cousins to former partners – in the exact same way it seemed easy to pass them off as natural human flaws. I never reached a conclusion on what could be narcissism, as it seemed too incredible, unbelievable, and well beyond my grasp; my entire life, I was raised to believe individuals were the way they were due to their pasts and upbringing, ergo, excusing much of their questionable behaviors.

Seeking further clarification, I sought Petraki’s book which she generously sent over to the ES team for a review. Based on the real-life story of a 19-year-old German woman, the book recounts a young woman’s encounter, life, and escape from an Egyptian male and ‘narcissist’. I must admit, it was the first and only book I found in which narcissism, in an Egyptian context, was addressed.

While the book narrates from the beginning (the encounter) to Petraki’s escape, it also ends with lessons and tips on how individuals can find solace in the rupture of a toxic relationship and move on to find themselves.

A tale of abuse, self-loss, and persistent trauma

Petraki narrates 5 years’ worth of a relationship; she specifically goes into certain situations through the chapters. One confusing aspect is the timeframe, as the book tends to jump from a period to the next. Initially, it is made clear that the semester abroad relationship had extended to a long-distance relationship, there is then a move from country to country without many details that are left to the reader’s imagination, or the logic behind certain decisions other than it was simply time for Petraki io follow Narcissist in Egypt. Later on, it is made clear that she has enrolled in a university for her MA in Egypt. Very clearly though, the move to Egypt and Petraki’s gradual enmeshment in the Narcissist’s world are calculated.

Throughout most of the book, the reader is exposed to Petraki’s terrorizing experience with a man who emotionally abuses and manipulates her into subservience (she even retrieves glasses of water for him!), who controls her actions and desires, who seeks to destroy her independence and who has etched himself so perfectly into her life and mind that she cannot find a way out. Indeed, the emotional manipulation and their clear effects are highlighted, however, the book may have benefitted with further explanation and narration into the debilitating sense of powerlessness, distortion of reality, and almost immediate losses of agency early on. As Petraki becomes aware of her own mother’s experience with narcissism, an epiphany strikes her that she’s been handed a similar torch, prompting her immediate plan of action to leave her abuser, and the country, as soon as possible. Her escape marked the tensest and dangerous passage in her book, leaving the reader to wonder if it would happen successfully, or if it would yield a more dangerous aftermath. Still, the end is joyful, and Petraki escapes.

Upon post-escape reflection, Petraki retroactively analyzes the narcissist’s own path to his narcissism, fuelled by dysfunctional family relations. She is humble enough to recognize toxicity that has been handed down to him, as well as insecurity and her own shortcomings to coping with the experience as well as its aftermath, namely, plenty of alcohol abuse and smoking. She is also excellent at seeing the shortcomings and flaws in her former thought processes, touching upon her former naivety, low-self confidence, and self-destructive habits while striking a perfect balance between being self-critical yet not punishing her former self for her flaws – a pitfall many end up in as they engage in self victim-blaming despite the clear fault of the perpetrators.

One important aspect Petraki emphasizes often is how Egyptian culture can enforce and justify the narcissist’s behavior: a Narcissist who grows up to see his mother’s entire life dedicated to her children and husband is inspired to emulate his role models. Moreover, this control can be validated through the cultural background of conservatism in Egypt where women’s outfits and bodies are policed by society, particularly by men.

Throughout the book, she is also quick to pass on interesting judgments on elements of classism, drug abuse, wealth, and survival which are heavily discussed regarding Egyptian culture. For instance, she wonderfully connects the elements that are important to narcissism (inflated sense of ego and idol image) with material wealth and body image: her Narcissist abuser was not only obsessed with his clothing and appearance but also ensured that Petraki’s diet, clothing, and appearance would complement his, throwing Petraki further in throes of insecurity and debilitating loss of sense of worth. Her traumatic experience is heightened with her social isolation, with few friends to call her own (due to fear and the abuser’s influence), as well as a strained relationship with her family in Europe.

She also lists a wide range of toxic and manipulative behaviors: from being discouraged to learn Arabic, to slowly being ‘acclimatized’ to embrace Islam, to constant victim-blaming. There were times the abuse Petraki was exposed to was so severe, it is truly heart-warming to see her break free from it, in the end.

A noted shortcoming to the book is what seems to be Petraki’s lack of understanding or contextualization of modern-day Egyptian society and its intricacies. While it is not to say that the Narcissist can be justified or excused due to the pervasive toxicity or problems that exist in the country, a failure to consider the culture in which he grew up in, as well as his social class and religion, seem to be at the forefront of this book. Egypt is a country rife with classism, poverty, a phobia of impoverishment, lack of sexual education, dwindling religiosity, and pressing governmental problems. As such, Egyptians live with a particular code in which they operate, or, as Rousseau would esteem, the price of ‘social contract’.

Petraki’s own background is German, and she persistently highlights cultural elements she finds bizarre (not smoking in front of Egyptian elders, hiding sexual relations, interfaith relationships, drinking alcohol with family members). In fact, far from the Middle East, social conventions are ample worldwide and can be at the forefront of intercultural relationships: in certain countries, it could be considered rude or disrespectful to talk to others with hands in the pocket, or to be loud in public transportation, or even to smile at strangers. In Egypt, none of these rules apply, thus highlighting that cultural diversity does exist, outside of the boundaries of ‘toxicity’, i.e, hiding sexual relations is considered the norm as Egyptian society is largely religious (majority Muslim with strong Coptic minority), and pre-marital relations are frowned upon.

Similarly, modern-day Muslims fast during Ramadan to try to ‘feel for the poor’; while this is the most common justification, Muslims fast during Ramadan because it is one of the five pillars of Islam, regardless of the reason. While it may seem strange for Petraki that many modern Muslims practice the fast by staying indoors and watching television series, it is not that much different from Christians who celebrate Christmas solely by feasting and exchanging gifts. That is to say, more delicate commentary relating to the cultural practices would have been advisable.

Another shortcoming to the book is the language Petraki uses, while it is accessible and easy to follow, the narration is too informal and feels like listening to someone talk out loud. While the book may not have been meant as an official memoir, or literary non-fiction, little expressions such as ‘You get the picture’ and ‘Who knows’ did not particularly assist in relating to the author or her plight.

It is refreshing to see Petraki’s brave exploration of her experience with narcissism. Her candor and bravery in sharing her story must not have been easy – not living it, nor re-living the experience through writing. The particular highlights of the book, in my opinion, were the end in a threefold manner: not only did Petraki manage to turn her life around by kicking the relationship aside, but she was able to disregard her toxic coping mechanisms as well. The Bonus Material, namely the life lessons and 15 ways to bounce back, were very thorough, inspiring, and instructive. They were brilliant gems of wisdom that did bring a tear to my eyes as they really do re-instill the reader with reminders of practices of self-love.

Emotional manipulation, psychological abuse, and the pervasive failure to address and give support to victims is still prevalent today. Petraki does a wonderful job at highlighting how a toxic relationship can become a life-altering, life-consuming reality that gradually forces victims to lose sense with their community, day-to-day life, friends, family, and, ultimately, themselves. It is particularly heartfelt to see how far the author has gone in her trajectory: from accepting a reality that persistently crushes her to ‘escaping’ the psychological shackles she was brainwashed to endure for almost half a decade. Surely, this is a topic many women living in the Middle East do not feel encouraged to explore and write about: domestic abuse, psychological abuse, manipulation, and even overt sexism are everyday realities many Egyptian and foreign women contend with, in Egypt, and have accepted as an inevitable part of the society. By speaking up so explicitly against the blatant mistreatment she endured, and which she observes other women endure around her, Petraki’s voice stands out for its sheer honesty.

Any opinions and viewpoints expressed in this article are exclusively those of the author. They do not reflect the views of the Egyptian Streets’ editorial team. To submit an opinion article, please email [email protected]