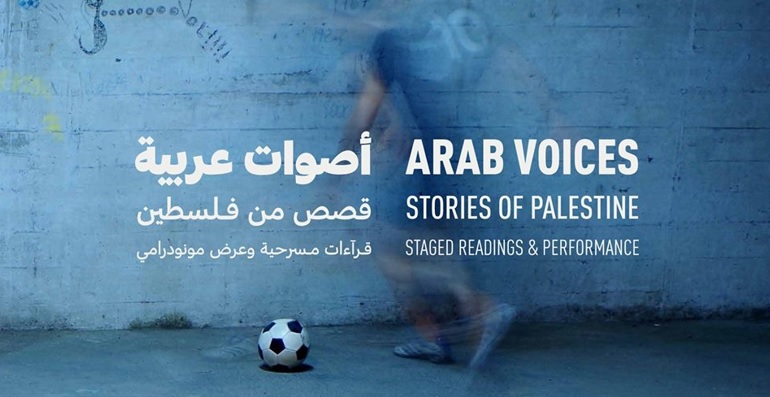 The festival is usually staged in Dar El-Nemer, Lebanon in the midst of March 2018. The project’s first event Arab Voices: here, there, now, then was held in NYU Abu Dhabi Arts Center in November 2016, in which works by Palestinian, Palestinian-American, Egyptian, Jordanian and Lebanese- American playwrights were performed.

Three Palestinian led plays (FOOT, by Ismail Khlalidi, The Hour of Feeling, by Mona Mansour and FOOD AND FADWA, by Lameece Isaac and Jacob Kader) who were part of the first festival in Abu Dhabi and later brought the festival to Beirut at Dar El- Nemer during its special 70th anniversary year of the Nakba.

Initiated as a series of workshops and collaborations between Arab-American artists, the festival, co-produced by Aliya Khalidi and Dima Matta, brought Palestinian stories to life.

The festival raised issues that question belonging, relationships, love and identity as co-producer Dima Matta declares in the project documentary. FOOT, a monodrama performance of the festival, introduced the audience to the life, the heart and soul of slain Palestinian footballer, Tareq Al- Zatmeh.

Playwright Ismail Khalidi highlights the importance of transcending the geographic, linguistic and political borders between Arab- American artists as he explains, in the project documentary, that he is an English-writing Palestinian.

FOOD AND FADWA, the first staged reading of the festival, introduces the audience to Fadwa, a 30-year old Palestinian single woman living in the politically volatile West Bank. The events take place in between the continuing preparations of her younger sister’s wedding during which they unfold a family’s “fight to hold onto its traditional culture with its need to celebrate love, joy and hope” according to the play’s synopsis.

“We’re trying to give some levity to the Palestinian situation so that we can really laugh about it; not in a way that takes it away from being serious, but in a way that makes everyone feel like they’re in the same boat” said Lameece Issaq, one of the playwrights of the play.

THE HOUR OF FEELING, the second staged performance of the festival, introduces the audience to Adham, and tells his journey that begins in Palestine and ends in London where he is to deliver a career-defining lecture. He, accompanied by his new wife, fight so as to balance the pull of family and home with his ambitions.

Aliya Khalidi additionally informed Egyptian Streets that funding is currently being requested from organizations to enable the play FOOT to tour Palestinian camps in Lebanon this summer. “Being amongst Arab-American artists and discussing their concerns and fears and viewpoints and relationship with their original “homeland” made me see myself from a different point of view.”

Hello Cannes, this is Arab Cinema!
Middle Eastern Culture Wars: The Battle of the Palates

Middle Eastern Culture Wars: The Battle of the Palates
Hello Cannes, this is Arab Cinema!