Asbestos Use in Egypt: a Growing Threat to Public Health?

Emily Walsh
Asbestos Use in Egypt: a Growing Threat to Public Health?

There is a long-standing history of asbestos use in Egypt. Dating back to the 2000-3000 BCE era, asbestos was supposedly used to assist in the embalming of Pharaohs, where they would be wrapped in asbestos cloth to limit the amount of decomposition that would occur.

While asbestos is not used in this way today, it currently lingers within many aspects of Egyptian society. Despite a country-wide ban of this mineral in 2005, the people of Egypt are still seeing diagnoses of asbestos-related illnesses. With the current ban in place, people are left wondering what exactly is causing these illnesses and what can be done to prevent this from becoming a larger problem.

Asbestos is a naturally occurring fibrous mineral that was once praised for its durability and unmatched heat-resistant qualities. Due to the traits of this mineral, it was commonly used in a wide variety of building materials. However, asbestos has been identified as a carcinogen to humans, causing life-threatening diseases such as mesothelioma cancer to develop from exposure to airborne fibers. Asbestos fibers become airborne when asbestos-containing materials (ACMs) such as insulation or concrete become disturbed or damaged. 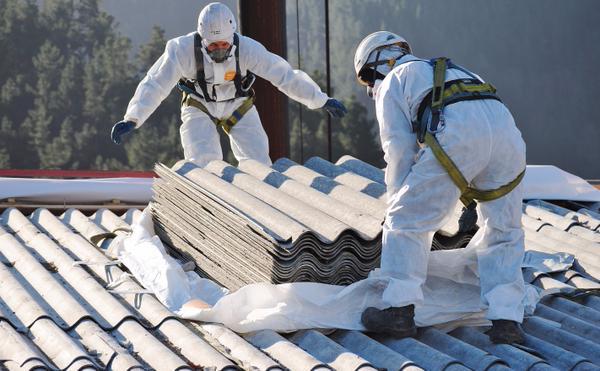 Once these microscopic fibers are airborne, they have the ability to be inhaled or ingested unknowingly, later causing severe damage to the lining of the lungs, abdomen, and heart. Over a prolonged period of time, these fibers lay dormant within the internal organs where they scar and inflame tissue which is what causes the asbestos-related illness. Typically, symptoms of the illness do not arise until 10 to 30 years after being exposed. This often has patients with cancer, such as mesothelioma, not being diagnosed until the later stages giving them a minimal chance of survival.

Asbestos comes in a variety of different forms, however the most prevalent types that were used for manufacturing purposes throughout Egypt were crocidolite, amosite, and chrysotile. Each type has its own unique composition, with crocidolite, otherwise known as blue asbestos, being the deadliest. With all three types still present within many older buildings in Egypt, the possibility of exposure still remains at a high risk.

Use of Asbestos in Egypt

Unfortunately, awareness of the dangers of asbestos in Egypt lagged behind the West, leading to an increased risk of exposure. With loose regulations around asbestos usage prior to the national ban in 2005, asbestos processing facilities created asbestos-containing products and dumped contaminated waste all across Egypt, potentially harming thousands.

The minimal health and safety precautions set in place at these factories eventually are what led to their closing, creating victims both in the surrounding area and those who worked directly with the mineral. According to the International Ban Asbestos Secretariat, cases of mesothelioma soared between 2000 and 2005, totaling 733, where as between 1984 to 1999 there were only 159 reported cases.

However, even with a foolproof ban set in place, the residual effects of past usage are still wreaking havoc across Egypt. The documentation of what buildings contain asbestos in Egypt is very poor, leading to a guessing game as to which structures are potentially hazardous.

With many older buildings being in a state of decay, the population inhabiting these locations are putting themselves at risk of inhaling deadly fibers on a daily basis. There is hardly any maintenance of these buildings and the government has yet to issue a nationwide effort to remove all asbestos from buildings serving as an exposure site. With the uncertainty of potential exposure, citizens must now take the matter into their own hands in order to safeguard their health.

In order for the people of Egypt to truly feel safe and have peace of mind when it comes to asbestos exposure, the government needs to revisit the imposed legislation revolving around the nationwide ban. The legislation unfortunately has two major loopholes, which create a fog around what is and is not legal. Nowhere within the legislation does it mention the ban of scientific names of asbestos, such as amosite and chrysotile.

In other words, the toxin can still be considered to be imported if their scientific names continue to be used. Also, the importation of products containing asbestos is still not prohibited, meaning that products that use asbestos are still welcomed in trade and thus pose a serious lingering hazard.

If you are truly concerned about asbestos and the potential harm it may cause, voice your opinion and lobby for this legislation to be revisited. The health complications that asbestos is causing when it is supposed to be banned are far too great and this issue must be put to rest.

Emily Walsh is the Community Outreach Director at the Mesothelioma Cancer Alliance. Her role is to connect the alliance in different relevant online communities in order to help raise awareness around the dangers that asbestos still poses today and to help prevent future outbreak of mesothelioma cancer. She is passionate about helping cancer patients discover holistic complementary therapies that address the well-being of the mind, body & spirit.