Reclaiming Azza: A History of Female Resistance in Sudan 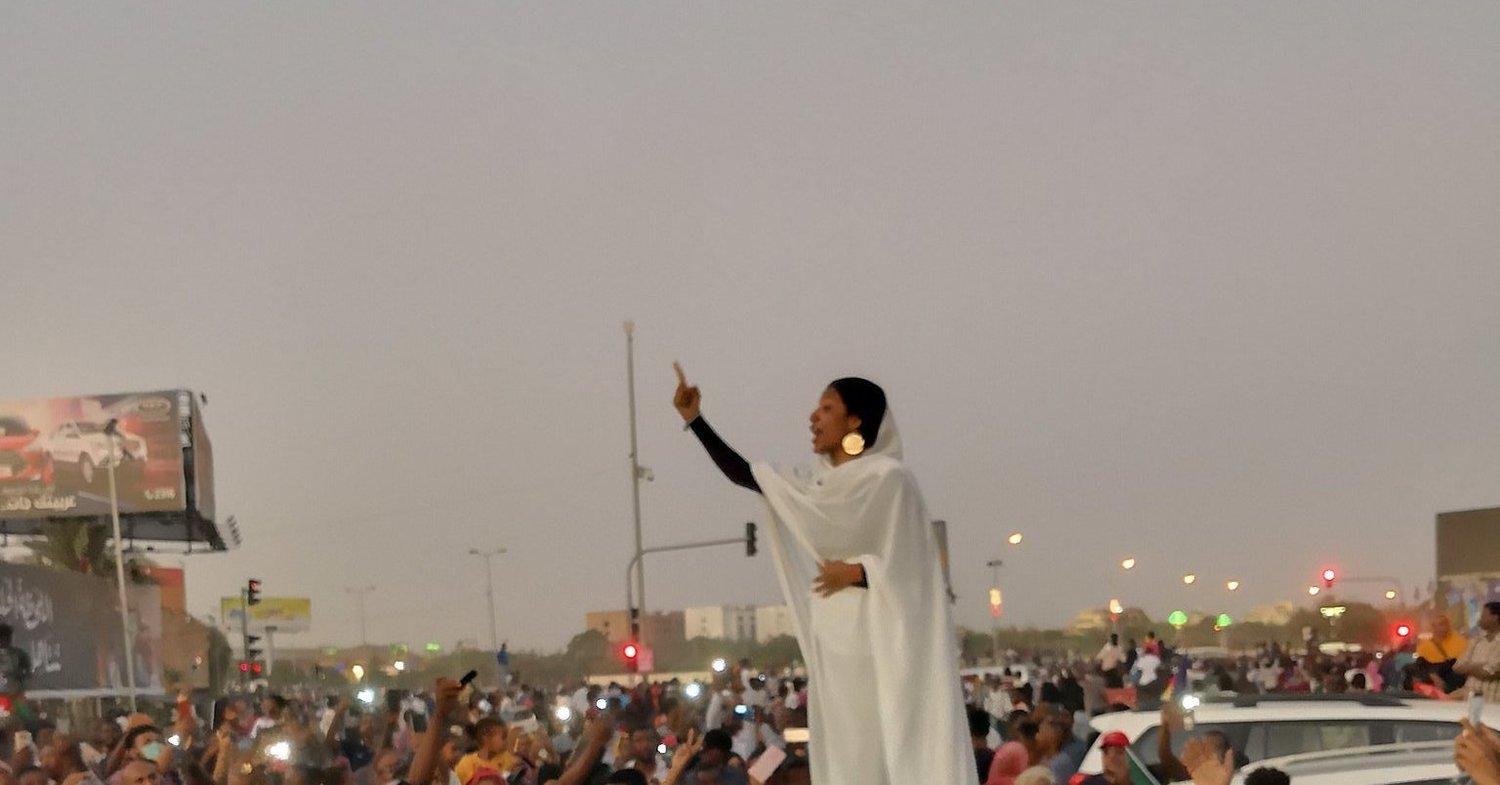 The image of a 22-year-old university student Alaa Salah dripped in a white traditional Sudanese garment known as the “toub”, standing on top of a car amongst a sea of protesters in Khartoum, is what finally turned the heads of global news outlets and the the overall international community towards the now-six-month-long Sudan Uprising.

Captured by local photographer Lana Haroun, the photo was accompanied by a video of Salah chanting poetry and the slogans of the revolution. It was this image, that finally began the long-overdue conversation about the events taking place in Sudan—one that led to the end of now-former president Omar al-Bashir’s 30-year reign.

Many news agencies, particularly in the west, either referred to the Sudan Uprising as purely “bread protests” or a “belated Arab Spring”. Reports inspired by the image of Salah were framed in disbelief towards the idea of a woman in a predominantly Muslim country, challenging a regime that oppresses them the most.

Not only does such rhetoric erase the role of women in Sudan’s previous revolutions (yes, Sudan has successfully overthrown not one, but two governments prior to the Arab Spring), it obscures the role of non-Arab tribes in the margins who are fighting the same government they suffer from. It also continues to perpetuate the Arab-African divide that has broken the nation for decades. Ultimately, this rhetoric fails to create any room for Sudan to properly heal from the consequences of colonialism and corrupt governments.

The uprising first began in Atbara—also known as the City of Fire and Steel—in December 2018 due to the price increase and scarcity of basic commodities like bread and fuel, as well as the low supply of cash in ATM machines. This quickly shifted to an entire nation’s outcry for the removal of Omar al-Bashir and his administration, which is fully responsible for Sudan’s depleting economy and for stoking ethnic divisions in the name of pan-Arabism.

Protests quickly spread throughout the nation in Sudan’s capital Khartoum, as well as in marginalized areas such as South Kordofan and Darfur. Some protests even sparked in newly independent South Sudan purely for solidarity purposes. This is in spite of the socio-economic exclusion and racism (heavily fuelled by al-Bashir’s pan-Arabism) that led to the split between North and South Sudan in 2011 to begin with.

Protesters across Sudan, particularly women, have been met with a brutal police force (half of those that took the streets and were leading the revolution were indeed, women), and these women have suffered and continue to suffer the worst from the regime.

The establishment of Sudanese public order laws, for example, place women’s bodies under constant surveillance through the complete control of their clothing and behaviour. Women caught participating in anti-regime activities would be detained and tortured. Security forces would even resort to cutting off their hair in order to incite fear. Despite these obstacles, it is clear that Sudanese women are a force to be reckoned with.

Contrary to popular belief, Sudanese women have been at the forefront of every socio-political movement dating back to pre-colonial times up until the present day. Our history is filled with female icons who have protected the land, and society they birthed. For instance in 332 BC, the Nubian queens of Meroe—known as the “Kandakas”—strategically prevented Alexander the Great from controlling Nubian land. Fast forward to the 20th century, Dr. Khalida Zahir—Sudan’s first female doctor who was arrested by the British for her clear opposition to colonial rule—founded the Sudanese Women’s Union (SWU). The union was known for challenging not only British imperialism, but also the establishment of Islamic governments that operated on Sharia Law.

An excerpt written by Amira Osman on Feminist Africa notes that the SWU pushed for dialogue between those in the North and in the marginalized regions of Sudan such as the Nuba Mountains and Darfur. It also played a crucial role in two of Sudan’s previous uprisings in 1964 as well as 1985. This trend has continued throughout history, right up till the current uprising. Whether it is their involvement in overthrowing colonial regimes or military dictatorships, it is clear that energy of the Kandakas continues to run deep through the blood of Sudanese women.

But I cannot discuss the empowerment of Sudanese women and their role in the nation’s third revolution without acknowledging the Kandakas in the margins. Women of Darfur and South Sudan have suffered a unique set of social, economic challenges from the regime. As those located in what is now known as South Sudan suffered from colonial and post-colonial regimes, women in the south rose up as leaders of non-violent resistance activities.

Female-led resistance played a huge role in the formation of the Southern People’s Liberation Army (SPLA) during Sudan’s second civil war. On a similar note, women in Darfur have also greatly contributed to shaping contemporary Sudanese society despite being largely oppressed by the government based in Khartoum due to ethnic divisions.

Despite their continuous suffering, Darfurian female poets—also known as hakamat—were and continue to be known as peacemakers in their respective communities. An article published by Nisrin Elamin and Tahani Ismail on Aljazeera emphasizes that resistance activities conducted by women that involved arms were in response to “political exclusion, underdevelopment and fabricated food shortages” after non-violent tactics failed to meet the demands of the people. And despite all this, the legacy of Sudanese women in the margins continues to be erased from history books, and have their voices silenced.

The image and video of Salah reciting poetry and leading the chants of the revolution are truly empowering, and are deeply rooted in the symbolism of Sudan’s rich culture and history. But my concern is that we have reduced an entire nation’s history and current revolution to a single caricature, one that does not adequately represent Sudan’s diverse population. While it is important that we have icons to give us a sense of hope, we must constantly remind ourselves that these movements are much more nuanced. Salah deserves to be an icon of such an important time in Sudan’s history, but let’s not forget who this revolution is really for.

Sudanese women all across the nation and throughout our complex history deserve to be acknowledged and applauded for their efforts. The Kandakas of the Nuba Mountains, Darfur, Gezira and all along the margins should not be excluded from a conversation taking place during such a crucial time in Sudan’s history. The latest revolution—which has been referred to as a “revolution of the mind”—is one that is learning from its past mistakes and women continue to be on the forefront time and time again.

While we are doing so, let’s make sure that we are including the women who have been marginalized throughout history as a consequence of colonialism and pan-Arabism.

Despite the decades of trauma Sudan has endured, despite the west and its media contributing to this trauma; we need to create room for a nation to properly heal. The first step is rather than speaking for Sudanese women, both in the capital and in the margins, we simply hand them the microphone. The time has come for us to reclaim our nation and heal her on our own terms.

Russia’s Old Tale ‘The Overcoat’: A Relevant Analogy for Egyptian Society?
Egypt and Turkey: the Calm Before the Storm

Born in Cairo, raised in the diaspora--Iman is a Sudanese activist and multidisciplinary artist based in Toronto. She is one of the three co-founders of a newly established art collective: Diaspora Express--which serves to foster the Southwest Asian & North African (SWANA or the more common and colonial term Middle Eastern) community.

Egypt and Turkey: the Calm Before the Storm
Russia’s Old Tale ‘The Overcoat’: A Relevant Analogy for Egyptian Society?