Jennifer Lopez vs Rania Youssef: Why One Was Slandered and Not the Other

Nour Eltigani
Jennifer Lopez vs Rania Youssef: Why One Was Slandered and Not the Other 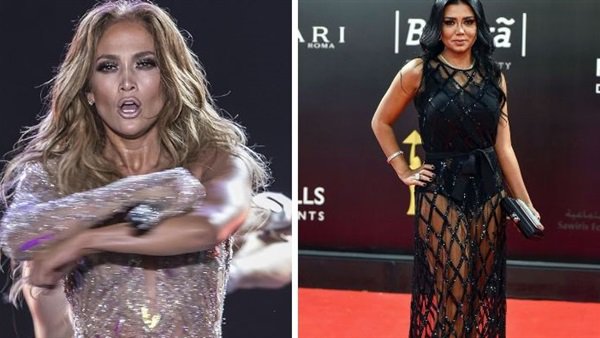 Social media users are angered by the reaction, or lack of reaction thereof, of the Egyptian community over Jennifer Lopez’s fashion choices during her performance in the North Coast last weekend, compared to the backlash the Egyptian actress Rania Youssef received for wearing similarly ‘revealing’ clothing during last year’s edition of the Cairo Film Festival.

Last year, Egyptian actress Rania Youssef stirred controversy because of her fashion choice, where she wore a see-through dress with a leotard underneath that was deemed “revealing”.

“The lining went up,” said Rania apologetically as this became the cause of the controversy. It did not end there, as some lawyers filed complaints against her, accusing her of spreading debauchery.

Though it is now an incident of the past, the artist’s name is now being frequented after nine months, due to the arrival of the international star Jennifer Lopez, who appeared Sunday evening, for a concert in Alamein in the North Coast.

In a glossy Versace jumpsuit with a transparent sleeve, a plunging neckline with one leg covered and the other revealed, so the international artist shone yesterday, in a the scene that recalled the look of her Egyptian counterpart, Rania Youssef.

Angry social media users wondered why Jennifer’s look was accepted while the latter was attacked.

A user commented on Facebook, “Jennifer Lopez literally did not wear a clothing that suits our country’s traditional culture, although she certainly knew our culture, and no lawyer came out saying that her clothes scratched the shyness of our society and I have grandchildren I could not make them see anyone wearing these clothes, such as what happened to Rania Youssef. Rania compared to Jennifer is an angel.”

She continued, “Is it because Rania is Egyptian and Jennifer is not? Arab society is fascinated by the urbanization and beauty of Jennifer and vilifies Rania Youssef.”

This brings forward a very interesting conversation on whether all women, Egyptians and non-Egyptians, are required to adhere to local traditions and customs that police women’s clothing and perpetuate the concept of modesty.

The debate surrounding Jennifer vs Rania is not the first of its kind. If you walk around touristic locations in Egypt, or spots with heavy expats presence in the capital, you witness how non-Egyptian women can ‘get away’ with much more “revealing clothing,” such as shorts and tank tops, that local and Arab women can not  wear.

This sprouts from the belief that Arab and Egyptian women are expected to follow the rules constructed for them by society – no questions asked – and practice modesty by dressing a particular way. On the other hand, foreign women have their own culture that has a different definition of modesty and are therefore under no obligation to comply to local norms.

This incident reveals the double-standards that are upheld by most Middle Eastern societies. In Egypt, it is evident that guarding what women wear is only practiced on local women because it is influenced by the Egyptian cultural and religious standards.

However, policing women’s attire is not a practice exclusive to a certain country, culture or region. In fact, the practice generates from  patriarchal notion that assumes women have no agency over their bodies and thus their clothing, a notion that is further fueled by religious and cultural practices in various countries.

Jennifer was not crucified by Egyptian society for her choice of clothing, because she, like most non-Egyptian women, is exotified and regarded as a sex icon. However, Rania was expected to practice modesty like other Egyptian women, and by “scratching” that modesty, she was instantly vilified.