As I walked along the leafy streets of Tay Ho in Hanoi, Vietnam I heard a faint, but familiar, sound coming from nearby. Scooters and cars whizzed past in a chaotic manner, beeping their horns in a way that’s not too unusual for those acquainted with Cairo’s streets.

As I got closer to the source of the sound, I couldn’t help but smile: a large mural of Egyptian King Mohamed ‘Mo’ Salah greeted me at the entrance of ‘Al Sultan Restaurant & Café’ (Al Sultan) with the soothing, but upbeat, voice of Amr Diab playing in the background.

Amr Diab’s voice, along with the scent of falafel (or taameya) in the air, saw me walking through the open doors of Al Sultan without hesitation, as if by second nature.

Al Sultan first opened in April 2018 in Tay Ho, a lakeside area popular with foreigners living in Hanoi. Its first location in Tay Ho was shuttered after the Egyptian owners, Ibrahim and Dr Mostafa, encountered problems with the landlord along with a decision by local authorities to expand the road, disrupting their venture. Ibrahim and his Vietnamese wife, whom he met during work for a company in Saudi Arabia, decided to start from scratch again, with a brand new Al Sultan restaurant opening in November 2019.

After walking past two giant murals of Mo Salah – one of him in his striking red Liverpool outfit and the other of his smiling face as if to welcome you inside – I was greeted by a beaming Tunisian waiter who led me to a table across from beautifully hand-painted Ancient Egyptian illustrations.

The Ancient Egyptian theme blended in nicely with the Ottoman-style art behind the counter and the more modern furniture in the small, cozy two-story restaurant. On the opposite wall, old photographs from Egypt’s ‘golden age’ of cinema and music decorated the walls.

After sitting down, I quickly opened the menu, which was in both English and Arabic, scouring it for my favorite Egyptian dishes: koshary and falafel. Compared to Vietnamese street food, the food here is pricier, ranging from $USD 2.50 for a plate of falafel to $USD 7.00 for a range of barbecued meats. This, of course, is well-priced when compared to other foreign restaurants in Vietnam (and even globally).

I was surprised by the size of the menu, which included items ranging from taboula, hummus, fuul and sambosak to shawarma, kofta, macaroni bechamel and even stuffed pigeons – an Egyptian delicacy. Like taboula and hummus, the menu included a number of non-Egyptian dishes such as chicken biryani.

Behind the counter, where trinkets from Egypt and elsewhere in the region decorated the shelves, the owner Ibrahim looked at me with a grin as he responded to me in Arabic that he is, indeed, Egyptian.

“When I came to this country, I found there was no information or knowledge about my country, Egypt, in Vietnam or about my religion, Islam,” explained Ibrahim, who first came to Vietnam in 2014 after working in Saudi Arabia for a number of years, when I asked him why he opened a restaurant in Vietnam.

“I had dreamed of having my own business, like a restaurant or a factory. When I came here, I decided to show the world my dream through a restaurant,” said Ibrahim, adding that the restaurant provides a window into Egypt and the Arab world through its food and hospitality.

As I scanned the menu and the food on offer, which is halal, I was curious why, as an Egyptian, Ibrahim decided to include non-Egyptian dishes.

“When we first thought about opening a restaurant, we recognised we are not only Egyptians here [in Vietnam]. There are other nationalities like Saudis, Algerians, Emiratis and so forth,” said Ibrahim.

“We worked hard to find a name that no other [Arab] would feel ‘this place is only for Egypt’. So we chose ‘Al Sultan’, which is a popular phrase across the region and is not associated to any one country. We wanted others to feel welcome.”

This focus on multiculturalism is apparent not only through the food, but also through the team that works at Al Sultan. While the chefs in the kitchen are all Egyptian, other team members are from a number of different countries.

It was a unique experience – one that almost reminded me of being in a restaurant in Cairo’s Maadi or Zamalek, where a mix of foreigners and locals often congregate at cafes and restaurants.

My first meal arrived shortly after I ordered, just as I had started to get lost watching a performance by Umm Kulthum on the television screen above the counter. Lentils, chickpeas and crispy onions lay atop a bed of rice, with the sauces on the side.

Each ingredient felt surprisingly fresh. Mixed together, they created the warm, familiar taste of eating koshary along the busy streets of downtown Cairo.

“Everything here is fresh. Especially the falafel – it is the most famous Egyptian dish,” said Ibrahim.

“Egyptian or ‘Arab’ products ingredients are difficult to come across here. Especially halal products like meat and chicken,” explained Ibrahim, adding that in Vietnam they have to source the cows and chickens themselves to ensure the process is entirely halal.

“We go through a lot of effort to either make certain products from scratch – like the tahini – or, when it comes to herbs and spices, importing them from abroad.”

The freshness was certainly evident in the falafel, which were authentic and true to Egyptian falafel. The falafel were nice and crispy on the outside and the right level of soft on the inside. My favorite part of Al Sultan’s falafel was the slight kick each bite provided – a little bit spicy, but not overwhelmingly so.

The tahini that came with a platter of kofta was another surprise: the freshness and flavor was so unique I almost declared it the best tahini I’ve ever had right then and there (but my knowledge of tahini is generally limited so I restrained myself).

Knowing there was so much more on the menu that I wanted to try, I came back another day and was welcomed by Ibrahim and his team.

Entering the restaurant this time around, I felt a calmness surround me. It was a familiar place, even though I had only been there once before.

“This place is not just a profitable business – it is a home for all Arabs so that they do not feel alone abroad,” said Ibrahim as we enjoyed a cup of black tea with fresh mint leaves.

“I have tried to make this place a second home for everyone. If you feel something, don’t hesitate to come ask for help, if you don’t have enough money or even any money, don’t hesitate to ask for food. This is your place, this is your home, we have to cooperate together, we have to share our problems together. Not only we know each other abroad through business or to benefit from each other. We are one family here.”

A home: while dipping bread into a beautifully presented plate of fuul, that is what I realized the calmness I had felt when entering the restaurant was. I had come home – surrounded by the people who radiate the kind of hospitality you only find in Egypt along with flavorsome, authentic food made with care.

Ibrahim’s recommendations for non-vegetarians: stuffed pigeon (which he says is quite popular with foreigners), macaroni bechamel and barbequed meats. 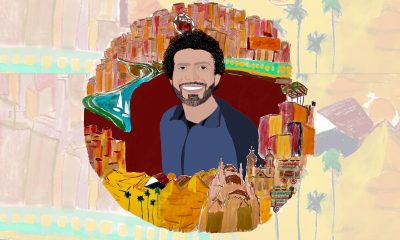 Podcast: Omar Samra Almost Didn’t Make it in the Atlantic

In Photos: A Stroll Through the Mosque of Ibn Tulun

Egypt’s Black and White Desert: An Unforgettable Journey to a Different Planet

The Endearing Story of a Dog on the Loose: Review of Kahareb’s New Album