How Egypt, France and Other Countries Took Measures to Support Women During COVID-19 Crisis

ES Buzz
How Egypt, France and Other Countries Took Measures to Support Women During COVID-19 Crisis

To say that women and girls worldwide have been severely affected by this crisis would be an understatement.

To say that any country has adequately responded to the needs of these women and achieved gender equality would also shrink the magnitude of the problem and overlook the need for more stringent measures.

According to the ILO, women are overrepresented at the front lines of this pandemic, accounting for 70 percent of the health and social services sector as well as the informal economy, meaning that they largely lack access to social protection programs and are at a higher risk of income losses.

On top of that, the structural inequalities that were already deep rooted in societies have become ever more apparent, with a spike in domestic violence in Egypt and the world, sexual harassment and particularly online sexual exploitation and abuse of women and girls under lockdowns.

Creating an effective response strategy to the COVID-19 crisis means putting the economic and social situation into context. It is testing every country’s social, political and economic resilience, as Cesar Augusto Mba Abogo, Minister of Finance, Economy and Planning of Equatorial Guinea, notes.

Below is a list of innovative policies that were taken by a few countries to avoid backtracking in achieving gender equality, despite the need for stronger and broader efforts. 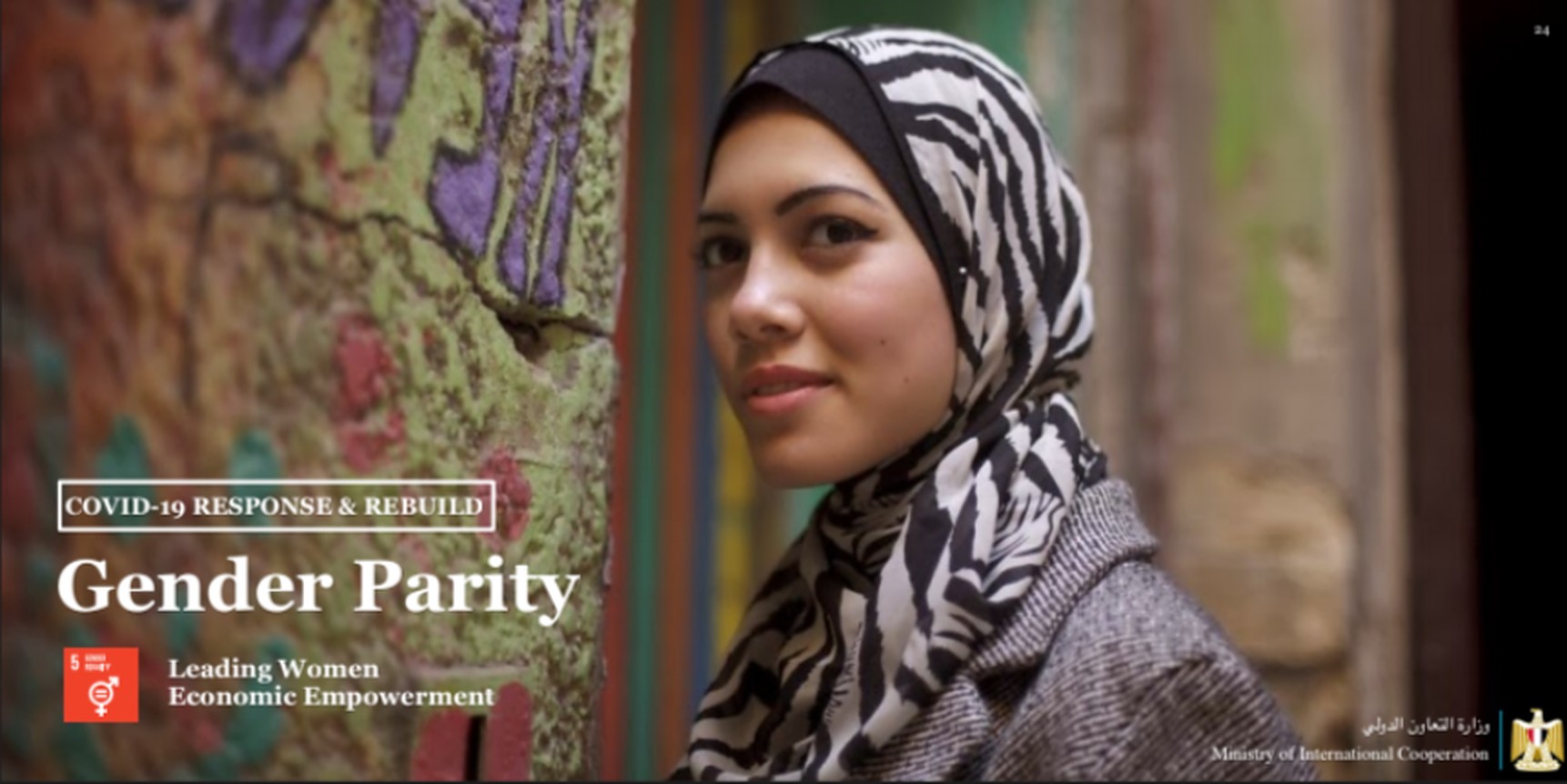 To respond to the COVID-19 crisis, Egypt was the first country to issue a Women Policy Tracker to monitor all governmental policies and measures to complement them with further programs and initiatives. Policies were centered on achieving gender parity through four ways:

Labor force:  A committee was established for irregular workers impacted by the COVID-19, with allowances provided of which 40% of the beneficiaries are women. Egypt also allowed working mothers with children under the age of 12 and mothers with children with disabilities to have the right of paid leave following the suspension of schools and universities.

Sectoral Support: Egypt increased the number of women beneficiaries of soft loans and loans with negligible interest rates to set up micro enterprises, with an aim to improve the living standard of families.

Civil society also played an important role, such as the Egyptian Centre for Women’s Rights through their hotline and online website ‘Ask Your Online Lawyer‘ to respond to the victims of abuse and the legal challenges facing women. The center has also been posting daily empowerment video messages on Facebook and Youtube to support women psychologically.

Egypt is also working to implement the ‘Closing the Gender Gap Accelerator’, which is the first of its kind in the Middle East and Africa based on a model of cooperation between the public and private sectors, and aims to accelerate action towards the advancement of women’s economic empowerment.

Minister of International Cooperation, Dr. Rania Al Mashat, highlighted during the 2020 World Economic Forum, that bridging the gender gap in Egypt would increase the gross domestic product of the economy by more than 34%.

Earlier in April, Canada’s Prime Minister Justin Trudeau announced an aid package that includes $40 million for women’s shelters and sexual-assault centres across the country, which came following calls by Minister for Women and Gender Equality Maryam Monsef at the cabinet to address risks of domestic or family violence.

Civil society and government coordination was at the heart of the distribution of the budget, as up to $10 million was provided to Indigenous Services Canada’s (ISC) network of 46 emergency shelters, along with $4 million to the Canadian Women’s Foundation, which distributes the funding to sexual assault centres across the country.

In the UK, the government also announced a £76m package to support victims of domestic violence and other vulnerable members in society, which will get priority access to local housing and charities.

In Australia, $150m AUD of the nation’s budget was also dedicated for family violence response. According to economist Maja Bosnic, gender-responsive budgeting is “go-to” tool to ensure that fiscal and financial decisions will not have negative repercussions for women in the longer term.

New Zealand also recently announced that more than NZ$200m in this year’s budget will be dedicated to domestic and sexual violence services.

An innovative method is Spain’s instant messaging service that offers a geolocation function and an online chat room to provide immediate psychological support to survivors of violence.

In other parts of Spain, such as the Canary Islands, women can also notify pharmacies on a particular domestic violence situation with the specific code message “Mask-19” to bring the police in to support.

A popular app in the UK called ‘Bright Sky’ also provides support and relevant information to victims of abuse. On top of that, it can also be disguised in cases where abusers might check on their victims’ phones.

To adapt to the crisis and address the difficulties of the judicial system to respond to urgent legal cases, Colombia’s government issued a decree to guarantee virtual access to legal services, which includes legal advice, virtual court hearings as well as police and justice services.

Other supreme courts of the US, Brazil, Singapore, China and India have also adopted similar measures.

A new website, ‘Remote Courts Worldwide,’ was set up to collect and share the worldwide experiences of virtual alternatives to traditional court hearings.

In places like Colombia, supermarkets are joining forces and are being trained on how to respond to women seeking help from domestic violence and how to refer them to the police.

In Argentina, pharmacies are also using a similar approach and have been declared as safe spaces for victims of abuse to report.

Later in March, in response to the surge in domestic violence cases by 30%, France announced that 20,000 hotel room nights were made available as shelter for women, and grocery stores were also providing pop-up counseling services. This is in addition to the government’s extra one million euro ($1.1 million) dedicated to support anti-domestic abuse organisations.