The Clouds’ Rendez-Vous: The Joint Legacy of Umm Kolthoum and Abdelwahab

Amina Zaineldine
The Clouds’ Rendez-Vous: The Joint Legacy of Umm Kolthoum and Abdelwahab 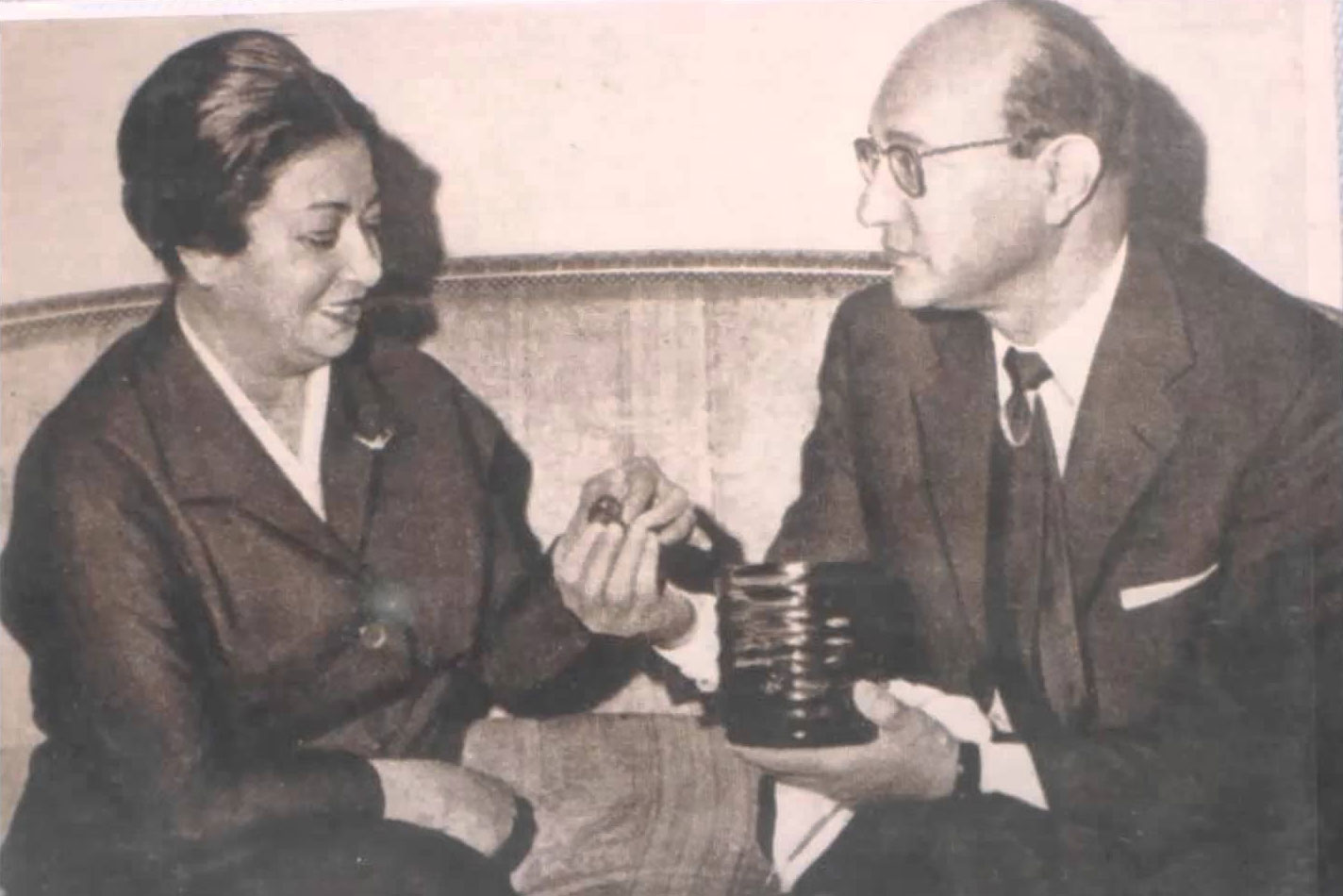 The year was 1964 when, at last, the Star of the East – already past the peak of her vocal ability – finally caved into the pleas that came to her from all sides. An institution of her own, it took pressure from none other than the President of the Republic himself, Gamal Abdel Nasser, to convince Umm Kolthoum to let her longtime arch-rival in the world of music, Mohamed Abdelwahab, compose a song for her.

Abdelwahab himself was not small fry. The Musician of Generations, a legend in his own right, was arguably one of the most innovative and creative musicians in modern Egyptian history. For decades he composed songs not only for himself, but for almost every icon of Egyptian and Arab music. Though he himself had a formidable ego to match Umm Kolthoum’s, he had long since welcomed the idea of writing music for the Lady of Arab Song.

With high expectations comes the inevitable risk of disappointment. As Umm Kolthoum and her band prepared to walk onto the stage to perform Inta Omri – the first song Abdelwahab ever composed for her – Abdelwahab stood, on edge, behind the curtains reciting verses from the Qur’an and praying the night would end on a high note.

But his fear was misplaced, and the lasting universal recognisability of the musical intro of Inta Omri speaks eloquently of the song’s raging success. Some versions of the story of that night tell that once Abdelwahab had found reassurance from a positive audience response, he left the concert hall and never attended an Umm Kolthoum concert again.

It later transpired that the two had been sitting on the project of Inta Omri (You Are My Life) for several years. After agreeing to write the music to Ahmed Shafik Kamel’s lyrics in the late 1950s, Abdelwahab took a break that almost led Umm Kolthoum to seeking out another composer. But once Abdelwahab got wind of the attempted replacement, he leapt back to work.

But what many do not know is that this first meeting, referred to by art critic Galil El-Bendary as “Leqaa’ Al-Sehab”, or The Clouds’ Rendez-Vous, was not the first collaboration between the two monuments of Egyptian music.

It was in the 1920s – sources differ on the exact year – that Umm Kolthoum and Abdelwahab first teamed up in a duet titled ‘Ala Ad El Leil Ma Yetawwel (For As Long As The Night May Go). However, performed at the home of Mahmoud Khairat, grandfather of the popular contemporary Egyptian composer Omar Khairat, this song was a work of Sayyed Darwish’s composition, not Abdelwahab’s.

At the time slightly less famous than Umm Kolthoum, Abdelwahab recalled in an article he wrote for the art journal Al Kawakeb that Umm Kolthoum commented quietly to him “You’re all right” (“inta kwayyis”) on that occasion.

Only a decade later, a second attempt at a collaboration occurred at the request of Talaat Harb Pacha, who apart from his wealth and influence, owned Studio Misr, Egypt’s largest film studio at the time.

Harb was eager to see the two of them in a musical film together, but the battle of the egos had already begun: though they agreed that Abdelwahab would compose the music for the songs he sang in the film, and Umm Kolthoum would choose the composers for the songs she sang, the dispute lay in the duets. Umm Kolthoum refused to sing to Abdelwahab’s music and Abdelwahab refused to sing to music that was not his own.

Examples of the battle of the egos abound, but one of the most unique stories played out when Umm Kolthoum learned that Abdelwahab was running for the position of Head of the Musicians’ Syndicate in 1942. She rushed to run against him, writing a sharp-tongued article titled “Why I Challenge Abdelwahab”. But it was only five days later that Abdelwahab responded with an article humorously titled after a popular Egyptian saying “He Hit Me and Cried and Beat Me To Complaining” (“Darabni w baka, w saba’ni w eshtaka”). To the surprise of very few, it was the powerful and competitive Umm Kolthoum who secured the position in the end.

Though she had a few steady favourites among lyricists such as Ahmed Ramy and Beiram El-Tunsi, Umm Kolthoum was known to uphold a particularly high standard when it came to presentation and music compared to lyrics. Her longtime musical partners Zakaria Ahmed, Mohamed El-Qasabgy and Riad El-Sonbaty were constants throughout her nearly 60-year career.

Therefore it was less than 10 years before her very last song release that she finally agreed to sing to Abdelwahab’s music. 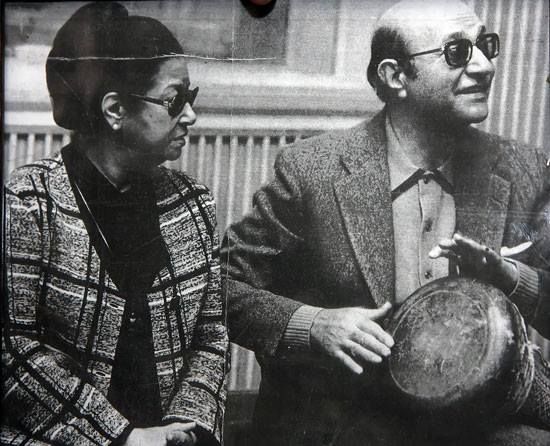 Needless to say, she did not get off easy. In nearly all of the 10 songs he composed for her, Abdelwahab did not shy away from taking Umm Kolthoum out of her comfort zone. Happy to experiment with sounds and styles, he took care to include an electric guitar in nearly all of the songs and an electric piano in some others. He also included foreign influences such as a Russian-inspired theme in Fakarouni (They Reminded Me), as well as waltzes in Lailat Hobb (A Night of Love) and Daret El Ayyam (And The Days Went By). He also made sure to incorporate some Oriental dancing rhythms, something Umm Kolthoum refrained from doing in her career until then.

Between 1964 and 1973, Umm Kolthoum and Abdelwahab collaborated on a final tally of 10 songs, among them memorable names such as Inta Omri, Fakarouni, and Amal Hayati (Hope of my Life), and collaborations with lyricists from the Arab World such as Aghadan Alqak? (Will I Meet You Tomorrow?) written by Sudanese poet Al-Hady Adam and Hathihi Laylati (This Is My Night) by Lebanese poet George Jerdaq. In fact, Umm Kolthoum’s very final song, Lailat Hobb (A Night of Love) was a composition of Abdelwahab’s.

The legacy the two singers left behind continues to resound until today, and in spite of the fierce competition that lasted decades, their collaboration only served to lift them up as unmatched icons of Arabic music. The Star of the East predeceased the Musician of Generations by nearly two decades, and after her death, Abdelwahab continued to sing her praises.

“The great, great great trait in Umm Kolthoum is that she continued to approach singing as a hobby until her last breath,” wrote Abdelwahab on the 9th anniversary of her passing. “She was a great listener, and had she not been a keen listener, she would not have been such a great singer.”

In Photos: Traveling Through Time with Egyptian Costume Design
Combining Fitness with Charity: Virtual Fitness Classes That Help You Support a Cause in Egypt

Combining Fitness with Charity: Virtual Fitness Classes That Help You Support a Cause in Egypt
In Photos: Traveling Through Time with Egyptian Costume Design