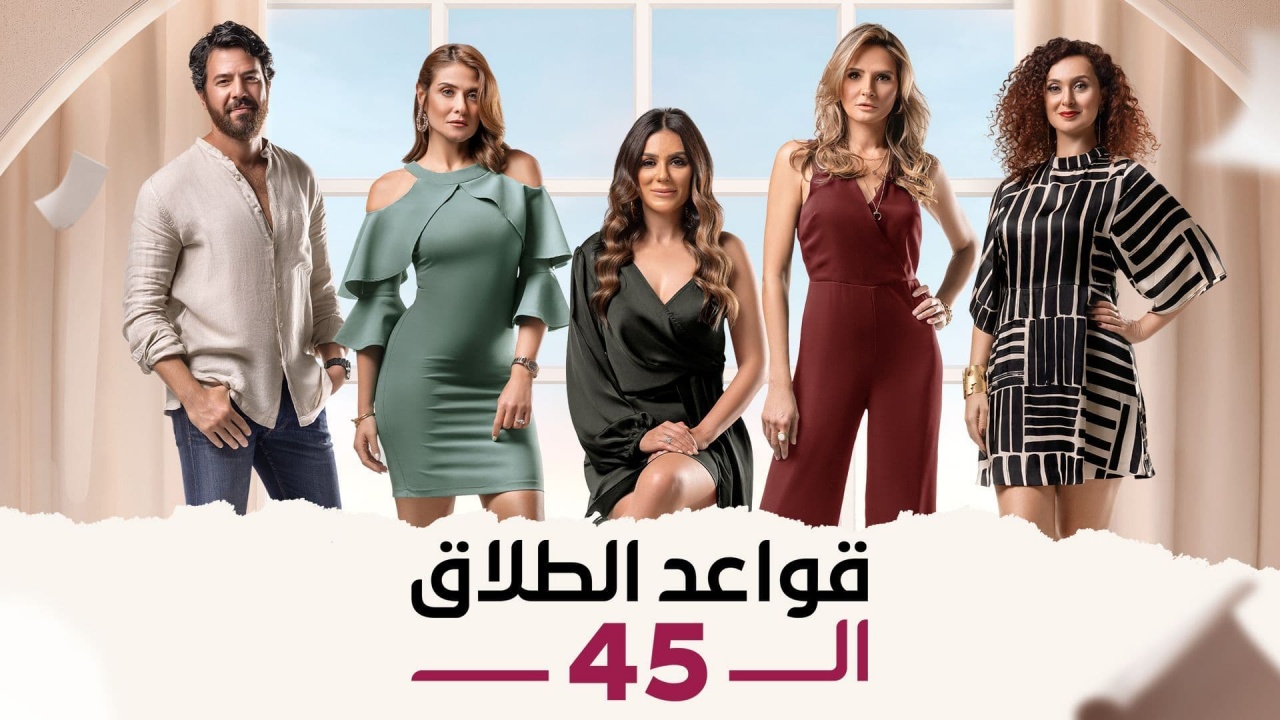 “Three successful independent women fight daily against gender stereotypes and work tirelessly towards obtaining the happy life they deserve.” This is the description of the Egyptian series Qawa’ed Al Talaq Al 45 (The 45 Rules of Divorce), which recently aired on the streaming service Shahid. The series is based on the American five-season comedy-drama “Girlfriends’ Guide to Divorce.”

My initial thought was to watch the series as it may provide interesting insight into the lives of divorced women in Egypt. Yet, from the first few episodes, I already had my doubts about the series actually portraying what was promised in the synopsis. I waited until the very last episode of the series to finalize my judgment. Unfortunately, I was right: this series only reinforces stereotypes about divorced women in Egypt.

According to a 2018 report by Egypt’s Central Agency for Public Mobilization and Statistics (CAPMAS), one-fifth of marriages in Egypt end in divorce each year, with 40 percent within the first five years of marriage. A survey conducted by Statista in 2021 revealed that Egypt witnessed an increasing trend in the number of divorces between 2008 and 2019.

When approaching the subject of divorce in Egypt, there are certain topics that must be discussed, as they are a key presence in the daily struggle of millions of divorced Egyptian women. These include “nafaqah” (the Islamic term for the financial support a husband must provide for his wife after divorce), raising children as single mothers, dealing with society’s attitude towards divorcees, and keeping up with their mental health along with their children’s mental health.

In the case of Qawa’ed Al Talaq Al 45, these topics are rarely discussed.

The series revolves around the character of Farida, played by Injy El Mokkaddem, who is an Egyptian author and mother of two, coming from an affluent socioeconomic class, and three of her friends, Dalia, Lana, and Sara, played by Heidy Karam, Sally Shahine, and Ingi Abou Zeid, respectively.

Farida, Dalia, Lana, and Sara are all wealthy Muslim women in their mid-40s; they hail from the same social class, and live in gated communities. The choice of characters already fails to fully account for the majority of Egyptian divorcees, who are mothers, suffering through maintaining a work-life balance, and struggling through the challenges of raising children.

Many women in Egypt are forced to work more than one job to enable their children to enjoy the same living standards and level of education they are used to, so they do not suffer after their parent’s divorce.

In the show, however, mention of any type of financial hardship is scarce. In fact, the only time a character mentions experiencing any financial struggles is when Lana wants to buy a jumpsuit from a designer brand and cannot afford it.

Multiple stereotypes stand out when watching the series: an overemphasis on rebounding romantically after divorce, plus-size dating stigmas, irresponsibility, and oversensitivity.

From the beginning of the series, the women are all portrayed to be extremely desperate to find a new partner after their divorce, moving from one relationship to another quickly, with no regard for repeated change of partners on their children. This is also the case when a new character joins their group of friends. Nadia, played by Nada Rahmy, is not part of the same socioeconomic group, and suffers a different and more intense issue with her divorce. However, when she does begin a relationship, the creators of the series decide to push another stereotype by reiterating the idea that only a plus-sized man would be interested in a plus-sized woman.

In multiple episodes, Farida falls short of preparing for tasks at her job. But instead of taking responsibility, she blames her professional shortcomings on her personal life, citing marital problems, disagreements with her children, or simply poor sleep. This choice of narrative reinforces existing stereotypes in Egypt that women are unprofessional and excessively emotional.

The show’s main characters are also often shown to make impulsive decisions. Instead of deftly tackling the subject of taking on children of a spouse and the challenges it presents, the series shows Farida asking her second husband to send his children to their mother in a fit of anger. Entering into a new marriage, a woman in her 40s will far more likely know what she had signed up for in such a situation, but Farida did not. In reality, many men and women can often make uninformed decisions when getting married, and situations like this could happen, but portraying it in this series heavily reinforces unhealthy stereotypes.

Normally, divorced couples should focus first and foremost on their children’s wellbeing and on creating a healthy environment so as to not implicate the negative effects of their separation on them. Instead, in the case of this series, children were involved in most marital problems, and introduced to their parents’ new partners even before the relationships were stable. While this may be the case in Egypt, particularly the embroiling of children in marital disputes, the show misses the opportunity to prioritize the children’s mental health.

Overall, in my opinion, there is a fine line between normalizing divorce, showing that divorce is not the end of the world, and making it seem like an appealing and easy option for the simplest marital issues, including boredom.

Nowhere, in the entirety of the series, is the psychological pain that the couple goes through after divorce addressed.

In Egypt, women who decide that they want a divorce, or have husbands who decide to divorce them, have always suffered societal judgment deeming them selfish. They are often blamed for the divorce, and for ruining a ‘happy family’; it is an undeniable fact that many, whose entire lives were orientated through the end goal of marriage from a young age, experience post-divorce trauma, loss of self-worth and status after a separation.

Since the series was created under the title ‘The 45 Rules of Divorce’, it would have been both beneficial and insightful to give divorcees a guide on how to lead happy lives post-divorce while raising their children in a healthy environment.

Arabic Calligraphy: A Written Revolution
The Trials and Tribulations of Living Alone as a Woman in Egypt

The Trials and Tribulations of Living Alone as a Woman in Egypt
Arabic Calligraphy: A Written Revolution