6 Copy-Cat Egyptian Series that are Just Too Uncanny

Over the last few years, much like Egyptian films copying Western ones, there has been a number of Egyptian series that have taken ideas, characters, even exact frames from American series.

While some of these series admit to being Egyptian remakes of their counterparts, others claim only to be inspired by them, and others still make no mention of the similarity at all.

The Egyptian version of the hit American TV series ‘Suits’, carrying the same name, is expected to air in 2022.
The series features Asser Yassin and Ahmed Dawoud as the main two characters, although the Egyptian version’s character names are yet to be announced.

The show follows Ross as he cons his way into being an associate at a prestigious law firm with the help of the firm’s senior partner, Specter. The plot thickens with the threat of Ross’ possible exposure, all while they tackle cases.

This Egyptian remake of ‘Suits’ has not yet been released, therefore it is not fully known how many similarities it will bear to the original. However, the creators have been transparent about the fact that it is indeed an adaptation of the USA Network original. 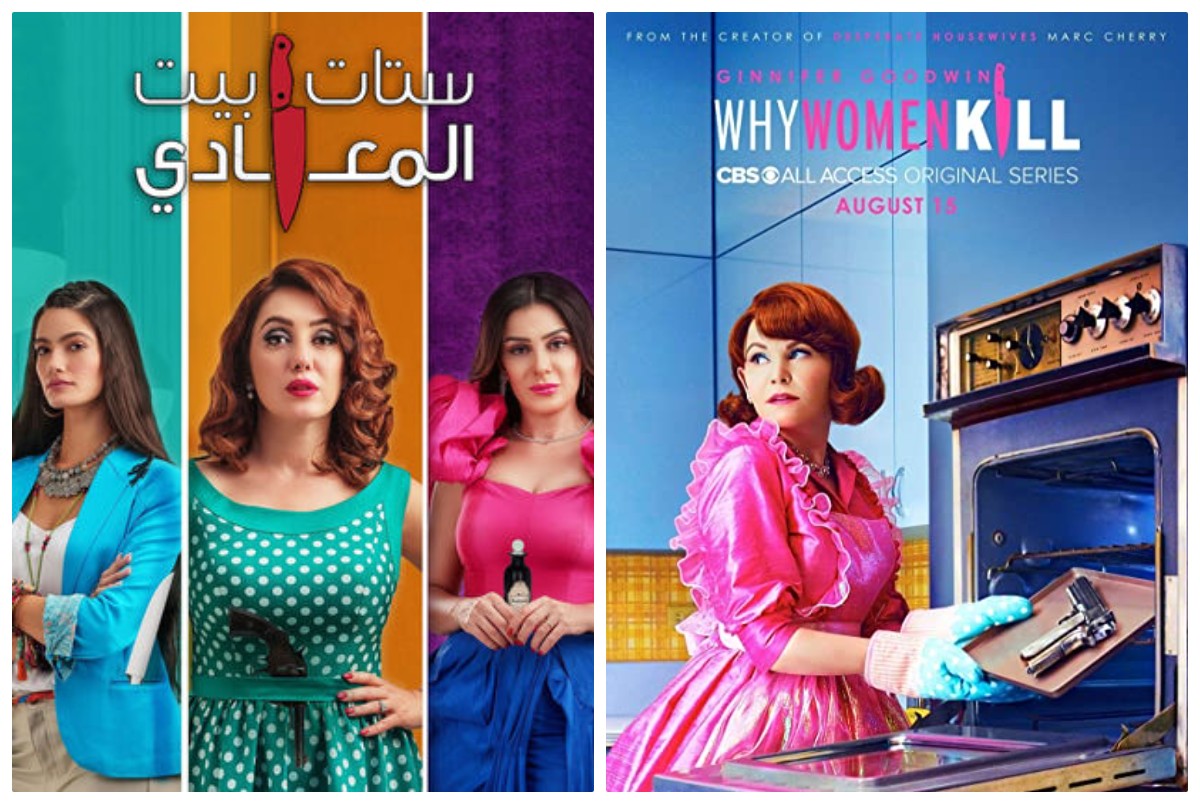 Both series follow the stories of three murders that occurred in the same house across three different periods, all due to infidelity. The plot focuses on three main characters: a housewife in the 60s, a socialite in the 80s, and a marketing tycoon in 2020.

Sitat Beit El Maadi weaves in a few changes in the plot to accommodate an Arab audience. For instance, the conflict between the 80s socialite and her husband was due to him coming out to her as gay in the American version, a storyline that was not kept in the Egyptian version. Instead, the character was made to have had an affair with a very young woman. And though women’s sexual liberation was among the key themes in both shows, it was less pronounced in Sitat Beit El Maadi.

The similarities between Sitat Beit el Maadi and Why Women Kill are clear: the former even went as far as copying entire frames from the latter, but as is the case in ‘Suits,’ the Egyptian show was upfront about being a remake. 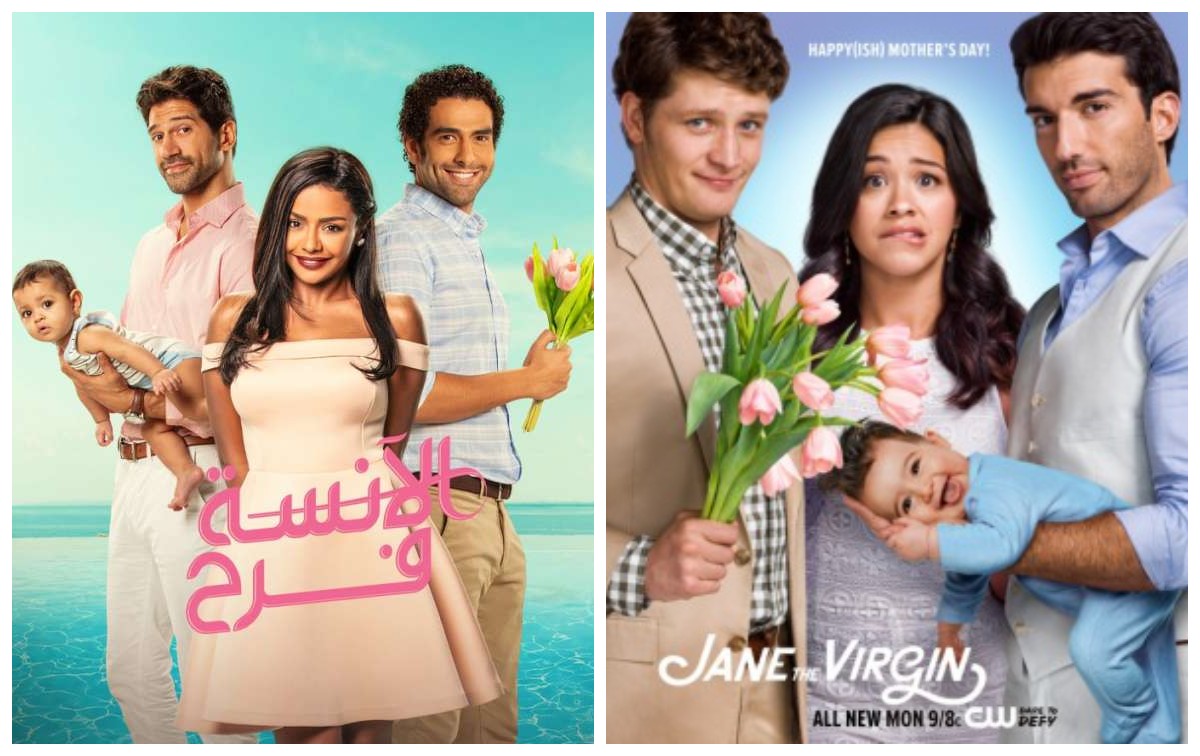 The similarities between the two shows are striking, but, El Anesa Farah claims these similarities, declaring that it is an Egyptian version of the Netflix series in the opening credit of the show.

Both series have the same plot: a waitress is accidentally artificially inseminated with her boss’s baby. She carries the baby to term and raises it. Chaos unfolds as Farah is also stuck between two lovers.

Both series also have the same concept: the satirical approach to a telenovela.

The creators of the el Anesa Farah maintained the costumes, the sets, and the color palette, which can be clearly observed in the posters.

A key scene in Jane the Virgin is in the first scene of the first episode. Jane is carrying a white flower, her abuela (grandmother) asks her to crumple the flour, she then asks her to fix it. Jane struggles, and this is when her abuela teaches her about chastity. This is a scene that the show keeps coming back to over its seasons.

The same thing happens in El Anesa Farah, with the same dialogue. While it didn’t make sense in an Egyptian series, the show attempted to make it a little more relatable by adding colloquial language to it.

The porch swing scenes are transition scenes in Jane the Virgin, the scenes were copied exactly in El Anesa Farah, down to the order of their seating.

It is odd that the show ran with the theme of artificial insemination, given that it is something most Egyptians would consider taboo. 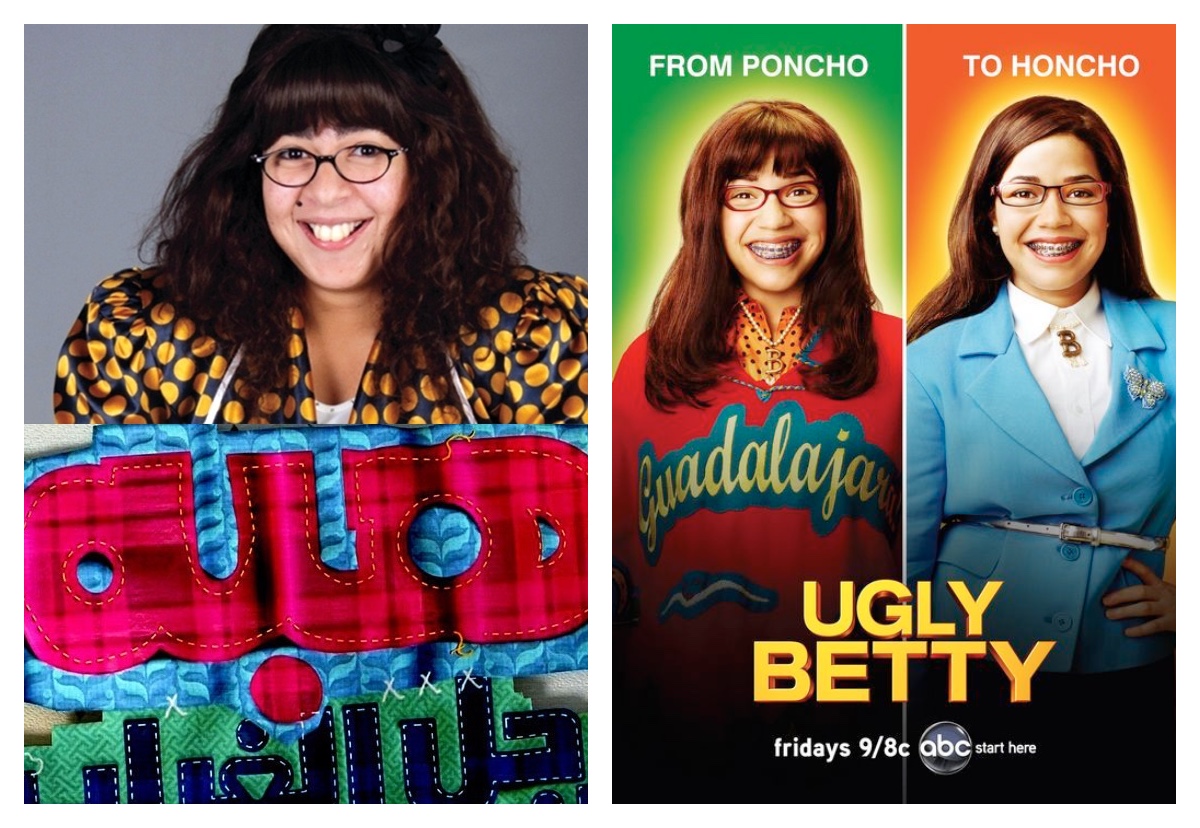 Heba regl el Ghorab (2014) is the Egyptian version of Ugly Betty. It starred Amy Samir Ghanem as Heba for the first season, the role then went to Nahed el Sebai. The American version, Ugly Betty (2006) is a sitcom starring America Ferrera as Betty.

Ugly Betty is not the original version of this story, it is an adaptation of Yo soy Betty, la Fea (I am Betty, the Ugly), a Spanish show.

The series follows a young woman, who is hired by a fashion company despite not meeting the conventional standard of beauty. She is then forced to deal with different people every day while her confidence continues to falter.

Hilarity ensues as the young woman tries to find her inner beauty while not being conventionally attractive and working in a fashion magazine full of blonde, long-legged models.

While the Heba regl el Ghorab series admits to being an Arabic copy of Ugly Betty, there is one striking difference, the main character’s attitude. While Betty smiles through the pain and keeps hopeful, Heba is put down by her circumstances.

Heba regl el Ghorab changed its entire cast in the second season, even though it was a booming success. El Sebai faced significant bullying due to her playing Betty, Facebook was not kind to her.

Ahla Ayam and How I Met Your Mother 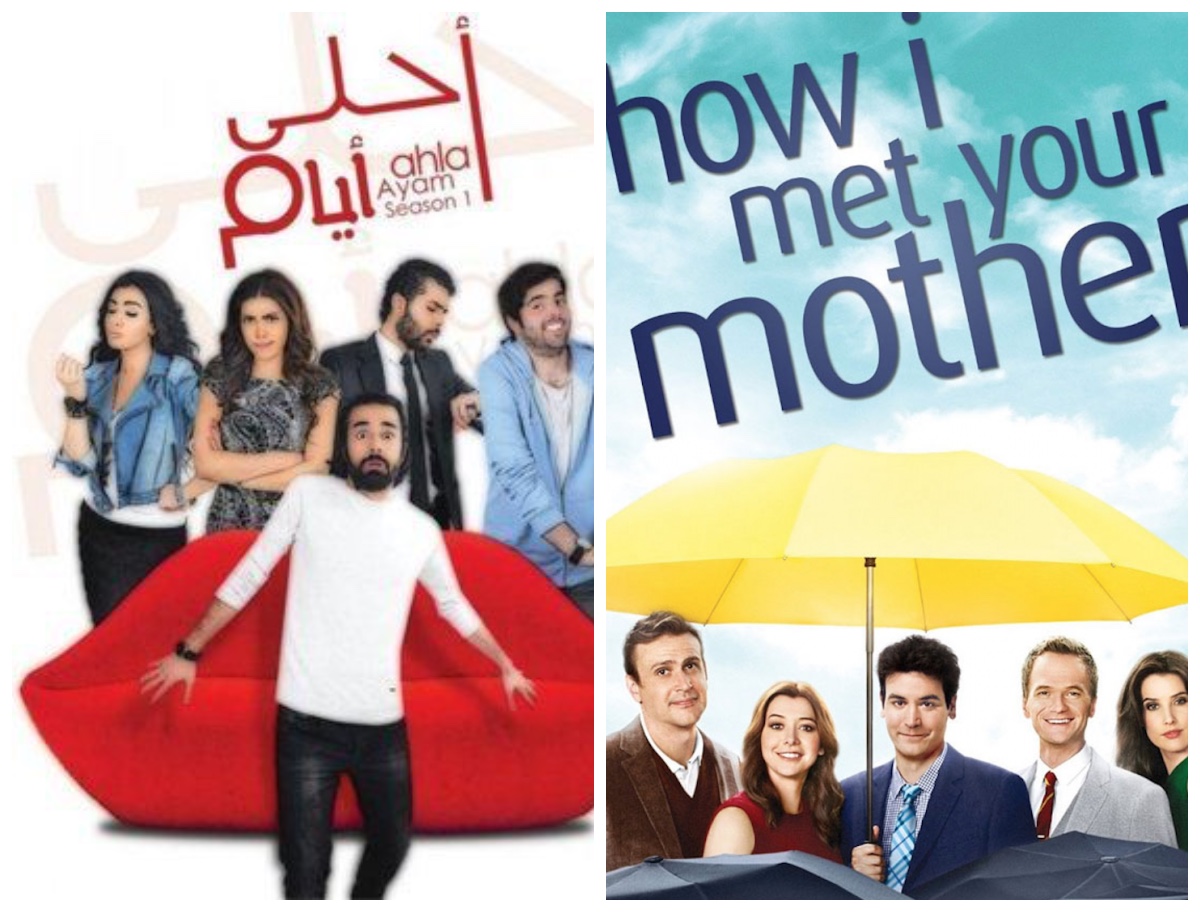 The sitcom follows Shadi, played by Tarek el Ebiary, as he tries to find his ideal match.

How I Met Your Mother (2005), also an anthology series is an American sitcom starring Josh Radnor, Jason Segel, Neil Patrick Harris, Cobie Smulders, and Alyson Hannigan as the five friends.

The sitcom follows Ted Mosby (Josh Radnor) as he tells his children how he met their mother through a recounting of his life in New York via a series of flashbacks. The plot is witty and upbeat, making the show a crowd favorite for years.

Ahla Ayam and How I Met Your Mother are both anthology shows, meaning that each episode stands on its own but still follows a major theme.

While Ahla Ayam does not have the same plot as the American series How I Met Your Mother, it is thematically the same and follows the trope of friends experiencing life together. That same trope can be found in series like Friends.

They also have very similar characters, in both shows, the three male characters are very similar. The main character Shady, shy and reserved, is looking for his life partner, similar to Ted Mosby. Then, there is his close friend, Haitham who is lucky with the ladies, and his other best friend, Karim, who is in love with one woman. That woman is a side character in both shows, they’re the “it” couple. The last female character is career-driven and has a fear of commitment.

The only striking difference between the two works is that How I Met Your Mother is a series of flashbacks, while Ahla Ayam is set in real-time.

El ‘Aaraf and Catch me if you can 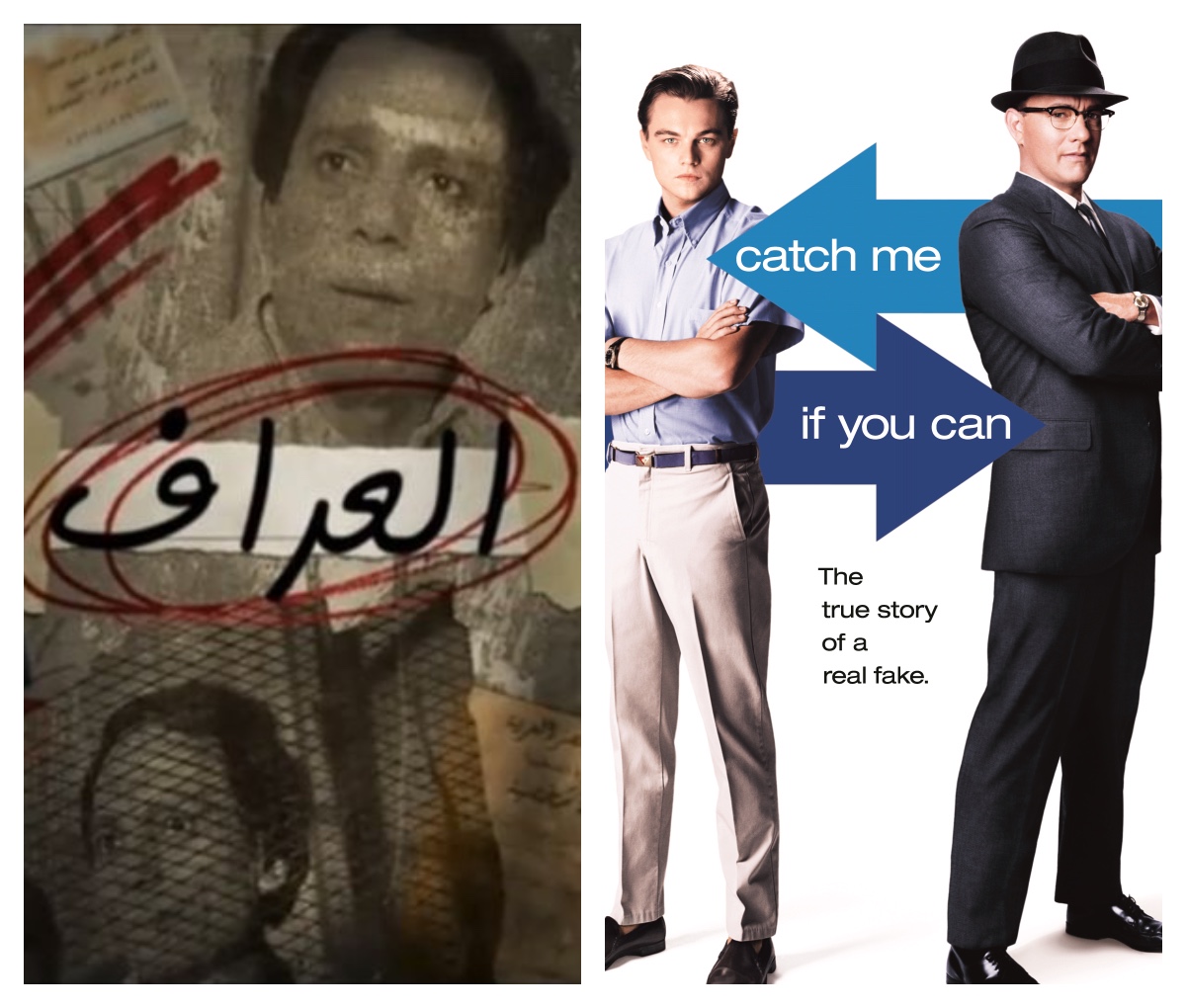 The plot follows Emam’s character as he cons his way to being presented as a businessman, socialite, judge, and doctor. Emam’s character eventually gets caught and imprisoned. He then gets released from prison and runs for the presidential elections.

Catch me if you can (2002) is an action-comedy film starring Leonardo di Caprio and Tom Hanks.

The film follows Frank, played by di Caprio, who is barely 21 years old and yet is an expert scammer. Frank manages to pass as a lawyer, doctor, and pilot. Perplexed by his success, FBI agent Carl, played by Hanks, becomes obsessed with catching Frank.

While one is a movie and the other is a series, they run in parallel, following the same concept: the main character being a con man who hasn’t been caught and the policeman who has made it his life mission to catch him.

This is one of the cases where the series does not admit to being inspired by the original as the creators advertised El ‘Araf as a separate work.

Mariam has a BA in Multimedia Journalism and two minors in Creative Writing and Anthropology. If you look for Mariam, you’ll probably find her scouring Cairo for new places to explore. She’s probably on her 6th cup of coffee right now, watching something obscure on Netflix.