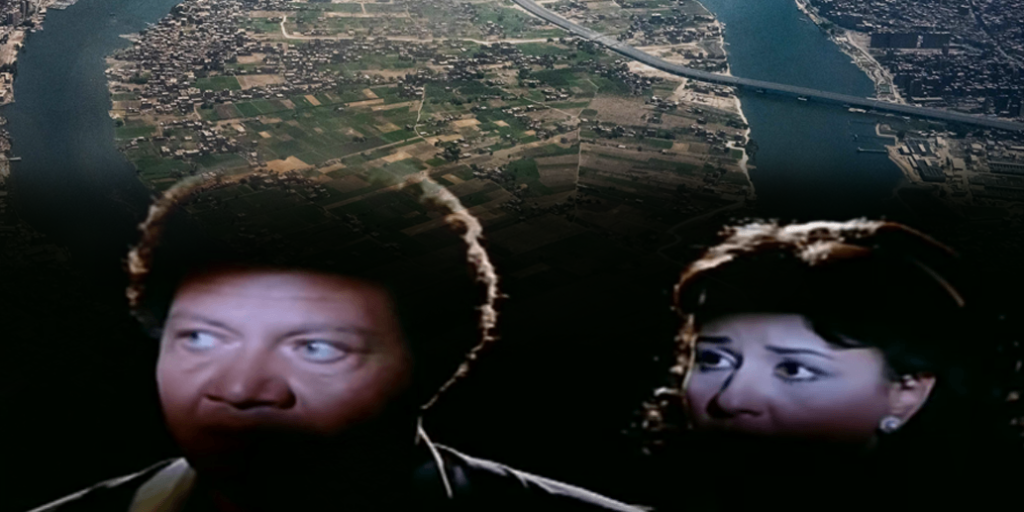 A love story doomed to end, set on an island doomed to change. Raafat Al-Mihi’s Lil Hobb Qissa Akheera (Love’s Last Story, 1986) is set in Al-Warraq, an island-city mired in controversy and clashes to this day. Al-Mihi navigates the topic far more subtly than recent news coverage on its clashes and informal housing demolition.

On the surface, it is about the impending tragedy of a marriage. Peering deeper into the plot, it becomes a film about the people of Al-Warraq, and how they turned an island into their home.

THE STORY BEHIND ‘LOVE’S LAST STORY’

The story of the film, set in the 1980s, is mainly on the troubling existence of Al-Warraq’s inhabitants and the identity they build for themselves that gradually isolates them from mainland Cairo – all through the lens of a struggling marriage.

In an Egypt of post-war economic damage and political anxiety, ‘Love’s Last Story’ centers around a married couple: the fun and light-hearted Refaat (Yahia Fakharany) and Salwa (Maali Zayed), his loving yet emotionally uneasy wife who frets over the fact that Refaat barely survived a heart attack.

Al-Mihi’s cinematic masterpiece slowly plays on the tension of an inevitable second heart attack, as Refaat spends most of the film attempting to assure Salwa that he’s fine.

“Don’t worry, my heart is made out of steel,” he enthusiastically reminds Salwa, who begins to become emotionally volatile.

Al-Mihi introduces the island’s resident doctor to the fold as a constant reminder that Refaat may suffer a second heart attack at any moment. Refaat’s own mother, who took over a successful stone quarry following her husband’s death, pesters him to seek a proper surgeon in Cairo.

Throughout these conversations, Al-Mihi introduces Al-Warraq, filming its informal housing, and documenting its folkloric and impoverished lifestyle on the silver screen. He depicts daily life in Al-Warraq, starting from the ferry taken to and from the mainland and ending with the city’s boisterous nightlife and dances.

The introduction of a false saint, whom the islanders believe returned from the dead, perpetuates Al-Mihi’s portrayal of folkloric beliefs on the island. Refaat and Salwa refuse to buy into the idea, calling it a sham. The islanders, on the other hand, believe the false saint was a gift from God, building him a refuge-turned-shrine in response to his return.

Refaat eventually succumbs to a second heart attack, while riding a bicycle happily along the Nile banks. On the other side of the island, a group of police forces violently raid Al-Warraq in a bid to halt the false saint’s growing cult following within the island – an iconic scene that showcases informal houses being destroyed.

In a poetic final scene, Salwa enters the now-demolished shrine, deliberately breaking the chair the false saint sat on. Outside of the shrine, a group of women covered in black kneel on the floor and cry over the shrine’s destruction, lamenting losing contact with divine intervention, all while the island burns in flames.

THE PARALLELS BETWEEN FILM AND REALITY

Today, Al-Warraq, which is situated in Giza, neighboring Shubra Al-Kheima, and which is known to be an agricultural island plagued by rapid informal urbanization, is being redeveloped into Horus City. Government officials hope the new city, one of many arising new cities, will become a luxury destination for the upper class.

The government’s recent announcement of Horus City on 26 July incited clashes and outcries over where the islanders will go – an existential question that has been weighing on the minds of both Al-Warraq and the government since the 2000s.

Controversies concerning the island date back to the turn of the 21st century, when former Prime Minister Atef Ebeid issued an order to seize the island for public use amid allegations of informal housing and environmental damage. However, Ebeid’s order was overturned in 2002 by a court rule following a legal claim by the island’s residents.

The government’s intentions to gentrify Al-Warraq were revived in 2010, with the aim to rebrand the island to Horus City. In 2017, under President Abdel Fattah Al-Sisi’s orders, clashes sparked between the islanders and state authorities, resulting in one death, dozens injured, and several jailed.

When first asked about the matter in 2017 following reports of casualties and detainment, President Abdel Fattah Al-Sisi responded to citizens’ outcries in a public press conference.

“When the island is originally designated as agricultural land, and you begin to witness informal housing, the government must take action […] Do we want to progress as a state or will we continue to allow for informal planning without regulation?” Al-Sisi explained in reference to the increasing illegal construction in Al-Warraq.

“The country was too negligent in the past, especially the past seven years. As a result, the informal development that occurred became a larger obstacle to tackle,” explained Al-Sisi during a live broadcast questions and answers session shortly after the 2017 clashes.

The government previously promised reimbursement or relocation directly to each residential household on the island following the 2017 clashes. The islanders, however, cannot imagine a life beyond its borders.

“The state owns a mere 62 acres of the island, and 1500 acres are the property of the residents. We would rather die than leave ‎our land,” Yehia El-Maghraby, the island’s local council member, proclaimed in 2017.

Al-Mihi’s screen depiction further emphasizes the island’s importance in the inhabitant’s identities. They are not the people they are without Al-Warraq.

This is best exhibited in the tense relationship between Salwa, a mainlander, and Refaat’s mother, an islander, who refuses to acknowledge her as a part of the community.

Another scene showcases Refaat’s sister mocking Salwa for acting like she’s “from Egypt” after Salwa dismissed the idea that the false saint could rise from the dead.

Five years later, on 15 August 2022, another clash occurred, as the government begins to execute its gentrification project.

Videos released on social media showcase homes being demolished and resisting islanders being detained. In Al-Mihi’s film, police forces are filmed tearing down and setting fire to the island’s informal camps, while residents resist – in an almost-mirror like reflection between reality and fiction.

Much of Al-Mihi’s film is shot on the island ferries – the only means of transportation in and out of the island. On the ferry, the people of Al-Warraq showcase a wide array of emotions. From celebration over Refaat’s marriage to a dark and solemn ride at night over Refaat’s heart attack.

To this day, the islanders require a ferry to cross to the mainland. Now, they quietly wait for authorities to ride the same ferries from the mainland to reconstruct the island from a slum to a city that excludes its current inhabitants