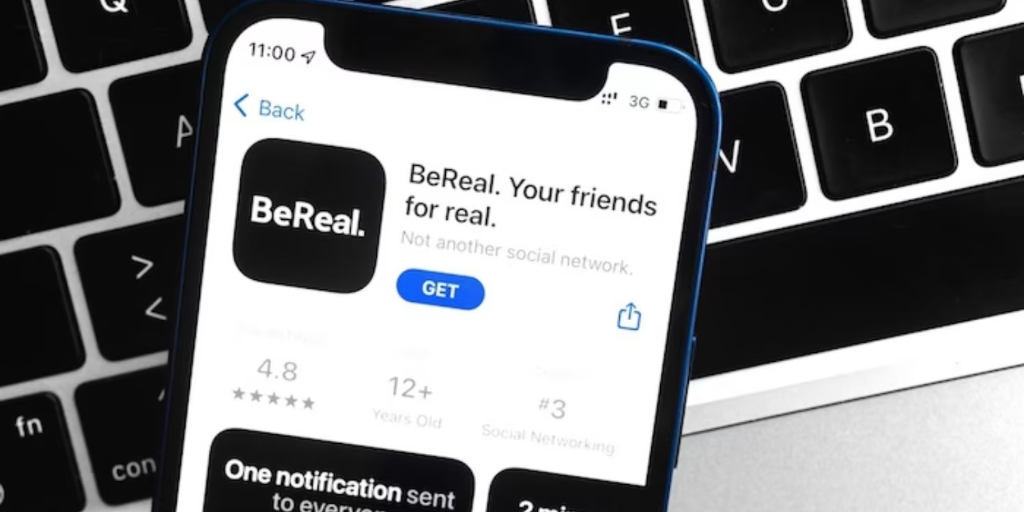 It is as if everyone’s life is remarkably exciting.

The premise is simple: BeReal is a photo-sharing app in which every user is sent a randomly timed notification to post a photo of what they are doing at that moment, to post within a two-minute countdown. When that iconic ping arrives, it is a signal for friends to simultaneously update one another on how their day is going.

BeReal also allows late posts – beyond the two-minute mark – but, in return, it does not allow late posters to view your friend’s posts until you take your daily picture.

The photos are taken directly from the application itself, rendering the user’s camera roll of pre-existing candids obsolete. And unlike Instagram, there are no filters at users’ disposal.

“That’s the fun thing about it,” says Nour El-Araby, a 22-year-old working in advertising. “I really liked the idea of having raw content on a platform, and to see all my friends do seemingly normal things during their days.”

Truly, BeReal leaves no survivors in its unfiltered world. Acne breakouts are bare for everyone to see. A bad hair day is a bad hair day. Unflattering lighting is the norm.

To some, like software engineer Youssef El-Manyalawy, 23, this is the metaphorical equivalent of getting accustomed to a nude beach.

“At first, I was perplexed with the app’s concept when I first tried it. Coming off of Instagram and Facebook, you expect all your photos to be nice. BeReal changes that – it doesn’t have to be nice at all, it lets me be myself naturally,” explains El-Manyalawy.

The application, until now at least, stays true to its promise of keeping the platform friend-centric. There are no influencers in sight, no stories promoting a sponsored brand. Some users, however, remain skeptical over how long this business model can last.

“Instagram was once ad-free. So was YouTube. I expect that it will eventually look to monetize, considering that there are literally zero advertisements or financial incentives on there. I’m trying to enjoy that while it lasts,” says Amr El-Sayed, a 23-year-old.

BeReal’s privacy policy does admit that all user data is collected, but guarantees that it is never shared with a third party.

In contrast, Meta – Facebook, Instagram, and WhatsApp’s parent company – is constantly mired in controversy over evidence of user data exploitation. Cambridge Analytica, a data analytics consultancy, and their use of private Facebook user data during Trump’s 2016 electoral win became a glaring example of unethical practices by social media companies.

Social media’s migration to a content-centric feed, kickstarted by TikTok, while popular among many who stand to gain from it, developed into an unpleasant experience for many users.

Most recently, world-renowned influencers Kylie Jenner and Kim Kardashian, who amass 368 million and 329 million followers respectively on Instagram, went public to criticize Instagram’s new TikTok-esque algorithm in a bid to revive its original purpose: a simple photo sharing app – a business model that some users had already found overwhelming.

“Apps like Instagram perpetuate this rat-race mentality, where I’m instinctively comparing my life to others, a result of the toxic highlight reel culture in the app. At the same time, this is how I follow up on people and pages, so it felt like I was stuck [there],” shares El-Manyalawy.

Jenner and Kardashian’s public criticism inspired a wave of similar protests across all types of users, from average to celebrities, resulting in the company’s CEO publicly admitting that its business strategy ‘was not a good idea’.

Twitter, another mainstream social media app, was shrouded in doubt and worry following a recent acquisition proposal by controversial billionaire Elon Musk, who uses his account on the app as his personal mouthpiece. A few years before that, during the presidency of Donald Trump in the US, the platform was seen as a tool for hate speech and political misinformation.

El-Araby, on the other hand, believes that social media remains what the user makes of it.

“I’m aware that the recent sentiment towards Instagram is negative, and that many feel like it’s no longer the same social media app we grew up knowing. But I think that comes down to what and who you choose to follow. Personally speaking, it remains a great way to check up on my friends because that’s how I use it.”

In a world where the word ‘authentic’ feels hackneyed thanks to advertising and marketing tactics, many find social media increasingly overwhelming. For El-Manyalawy and El-Sayed, that overwhelming app is Instagram. For El-Araby, it’s Facebook.

BeReal acts as the answer to the current social media climate – the anti-Instagram. It offers a refuge for users to escape content-centric algorithms in favor of a feed dedicated to being unfiltered with friends and family.

The question is how long can that refuge last until it transforms into another for-profit enterprise.

“Personally, the experience feels like a gimmick that me and my friends are enjoying at this moment. It doesn’t feel like something I would do forever, unless they keep upgrading it in a way that doesn’t take from its original identity,” says El-Sayed.

For the time being, BeReal is leaving an impact on people’s lives, showing them that connecting with friends and family doesn’t have to be so consuming – an impact so effective, that Instagram is already testing a new feature that mimics BeReal, as they did with Snapchat and Stories – a testament to the application’s growing fanbase.