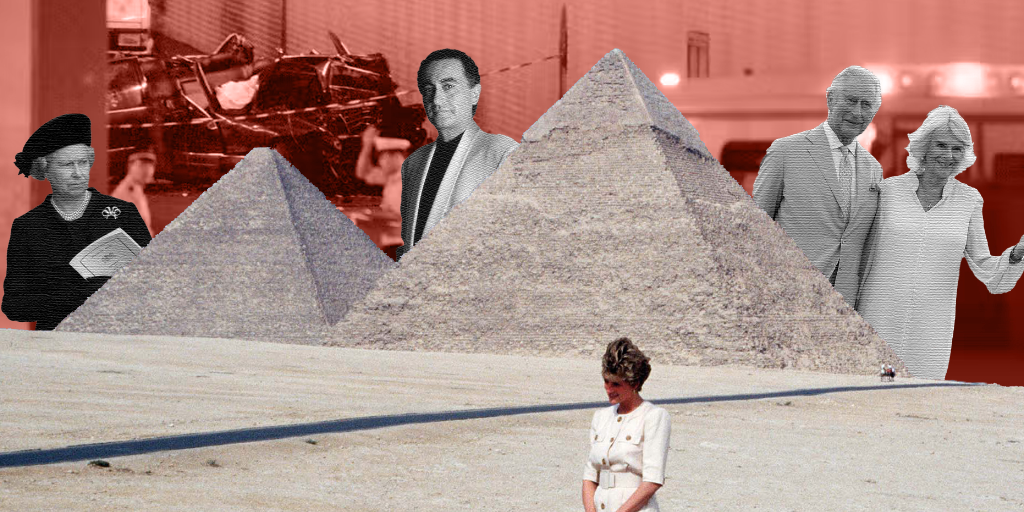 The king – or queen in this case – is dead, long live the king; a seemingly contradictory phrase that accurately describes how Queen Elizabeth’s death on 8 September – and Charle’s consequent coronation – simultaneously marks the end of an era and the start of a new one.

As the western world, along with world leaders, warmly welcome Charles’ ascension to the throne, some Egyptians are reminded of Diana – the ‘People’s Princess’ and a significant Egyptian pop culture figure during the turn of the twentieth century.

To Egypt, Britain is intertwined with a colonial past. Diana, on the other hand, was a symbol of love, compassion, and, eventually, tragedy.

While some Egyptians, including President Abdel Fattah Al-Sisi, mourn the passing of Queen Elizabeth, very few mourn the empire she leaves behind, and the colonial cloud that continues to loom over its history.

Egypt became a victim of Great Britain’s colonial ambitions in 1882, occupying the country until 1957 – during Elizabeth’s reign. Egypt and Britain continuously clashed over the years, from independence struggles in 1922 to overthrowing the British-influenced Egyptian monarchy, culminating in the Suez Crisis of 1956.

While Elizabeth may have not been the decision-maker behind the invasion – that credit goes to Prime Minister Anthony Eden, who resigned in disgrace afterward – she served as the face of Britain’s colonial pursuits.

“The world today is different. Egypt is much stronger now. Today, the British radio calls me a dog, as they’ve done, I tell them you are sons of dogs,” Nasser proudly retorts in a post-Suez victory speech, later mocking the monarchy and Anthony Eden as well.

Needless to say, the Egyptian outlook on Elizabeth’s Britain was noticeably hostile, and vice versa.

Relations did eventually soften following Anwar Sadat’s ascension to presidency. The country’s reconciling relations with Britain were made evident in August 1981, when Prince Charles crossed through Egypt during his honeymoon cruise with an amiable yet unknown Princess Diana. That trip would mark her connection to the country.

Over the coming years, Diana’s reputation grew from yet another member of a disdained royal family to a beloved icon of the Egyptian (and Arab) world.

THE UNIVERSAL RISE OF DIANA, THE QUEEN OF HEARTS

Diana was only 20 when she married Charles, who was 12 years her senior, yet she quickly won the hearts of the British public – a reputation her own husband was jealous of. It did not take long for the marriage to deteriorate, as the royal couple’s love soured in 1984 shortly after Prince Harry’s birth.

While Elizabeth, and a now-matured Charles, struggled to adapt to a post-imperial Britain, Diana was a champion of multiculturalism and social progress.

The British monarchy had long appeared as a detached and distant image to the common British citizen. Elizabeth’s longstanding reign served as a symbol of stability rather than warmth and love – keep calm and carry on.

Diana, on the other hand, was an adventurous and independent outsider in the eyes of the monarchy, stuck between normality and royalty. The People’s Princess preferred hands-on human and social experiences over castles and seclusion, a decision that further distanced her from the monarchy, and eventually led to a divorce with Charles in 1996.

Wherever she toured, Diana would embrace and respect cultures in an intimate manner never witnessed before by a British royal: from visiting a cancer hospital in Pakistan, to controversially hugging HIV patients in New York – a moment that helped direct public attitude toward the illness from fear to care.

In Egypt, 1992, over a decade after honeymooning in Hurghada’s Red Sea, Diana returned to experience cultural sites and Egyptian society once more.

Her tour was celebrated by Egyptians, largely in part because of her charitable visits – ranging from visiting a school for blind children to visiting Al-Azhar mosque while wearing a head scarf in respect to Islam’s traditions.

It was beginning to show that while, politically, Elizabeth was Queen of Britain, Diana was the Queen of Hearts, winning over Egypt and its neighboring countries.

DIANA’S DEEPENING CONNECTION TO EGYPT, IN LIFE AND DEATH

Diana’s affinity to Egypt only increased following a highly publicized relationship with Dodi (Emad) Al-Fayed, son of the monarchy-hating billionaire, Mohamed Al-Fayed in 1997.

To Egypt and the Arab world, Diana’s newfound love interest was a moment of celebration. It represented a moment of unity between a progressive and compassionate ex-royalty and an Arab-Muslim man.

To the monarchy, it was a slap in the face to their Anglican and Briton-exclusive establishment – a sentiment confirmed by Meghan Markle, the American actress-turned-royal wife of Prince Harry, when they publicly revealed racism within the royal family and British media in a 2021 interview with Oprah Winfrey.

Unlike Harry and Meghan, Diana and Dodi’s rebellious love affair was short-lived, after a tragic car accident in Paris took both their lives on 31 August 1997 – an event that shook the world for years to come.

Diana was 36 when she passed away, Dodi was 42. The United Kingdom came together to mourn what seemed to be a tragedy. Some Egyptians suspected a potential conspiracy, instead. In one video by the Associated Press in 1997, covering Egypt’s reaction to Diana and Dodi’s deaths, Egyptian booksellers can be seen displaying conspiracy books and magazines about the accident. Passersby can be seen reading its pages with great focus.

One Egyptian lawyer, Nabih El Wahsh, went as far as to file a lawsuit in November 1997, a few months after the crash, accusing Queen Elizabeth and Prime Minister Tony Blair of intentionally plotting the car crash. The lawsuit, obviously, was dismissed for lack of evidence.

Mohamed Al-Fayed, in an interview two years after the accident, also expressed his belief that his son’s death was premeditated.

“They still don’t accept that my son, an Egyptian Muslim, can be the step father of the future king,” explained Al-Fayed when asked why he suspects criminal intentions behind the crash during his interview with ‘60 Minutes’.

Despite the accusations, no evidence has surfaced to indicate the possibility of a murder. In 2008, a highly-publicized and long-drawn legal case raised by Al-Fayed ruled that Diana and Dodi’s deaths were the result of incessant paparazzi camera flashes and reckless driving.

Twenty-five years on, Diana’s ex-husband is finally crowned king, with his long-term partner Camilla Parker as queen consort – a woman Diana nicknamed ‘Rottweiler’. He and his kingdom celebrate this new era in the monarchy, welcomed warmly by world leaders.

Diana’s legacy, however, lives on, as a constant reminder that she represented the only semblance of compassion and love seen by Egyptians and Arabs in what was a historically oppressing empire.

US Deducts $130 Million From Egypt's Military Aid Over Human Rights
Cities and Villages of the Past: Living as an Egyptian During Greco-Roman Times

Cities and Villages of the Past: Living as an Egyptian During Greco-Roman Times
US Deducts $130 Million From Egypt’s Military Aid Over Human Rights