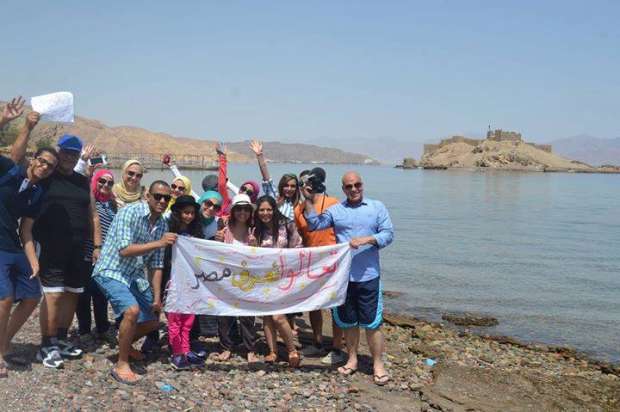 Despite her young age, Nada’s passion for travel and discovery was enough drive for her to launch the “Let’s Explore Egypt” initiative, through which she aims to refresh Egypt’s crippled tourism industry.

In only two years, Nada Zein al-Din, 25, organized 60 trips that traversed Egypt from east to west.

“Since I was a kid, I loved traveling and saw a lot of places inside Egypt that are worth seeing and I wanted others to see them,” the young Egyptian girl, who is specialized in information systems and geographical studies, told Aswat Masriya.

For these reasons, Nada launched “Let’s Explore Egypt” in April 2014 through Facebook, where the initiative now has around 4,000 followers.

The initiative comes at a time when the tourism sector, the main source of income in Egypt, has been hard-hit in the aftermath of political turmoil over the past five years.

Since it started, the “Let’s Explore Egypt” team visited Nubia in the south, the Siwa Oasis in western Egypt, Ras Shitan and Nuweiba, both in the east of Egypt, Sannur Valley Cave in Beni Sueif; Alexandria, Halayeb and Shalateen and other places across the country.

Nada said the initiative’s trips are not limited to places outside of Cairo and also include ancient streets and mosques, monasteries and museums inside of the capital.

The initiative’s main objective is to revitalize internal tourism and disseminate knowledge. Prior to every trip, Nada begins reading thoroughly about the destination and in some cases she seeks the help of tour guides.

“I am constantly looking out for new places that people never visited so that we can discover them,” she said.

Nada underscored that the initiative’s aim is not material gain. “Everyone [who joins us] covers their personal expenses, and the aim is not profit but to know our country and make new friends and experiences.”

Nada graduated from the Faculty of Arts’ Geography Department at the University of Ain Shams in Egypt. She obtained her master’s degree in 2016.

She is planning to organize treks in the coming period. “We want to mix between walking, discovery and tourism promotion, so as to maximize the benefit.”

Over the course of the past two years, Nada planned a number of trips on bikes, which she also uses to go to work and run errands.

She says, “Bikes are an environmentally-friendly means of transportation and very practical, and people started getting used to them as transportation methods once again.”

According to Nada, the beginning of any new idea is the hardest part but afterwards it becomes easily accepted by society.

In Brief: the Evolution of Egypt’s Advertising Industry

‘I Feel Quite Safe’: An Egyptian in China and Her Personal Account of the Coronavirus Outbreak

Sitara: Pulling up the Curtain on the World of Children’s Theatre