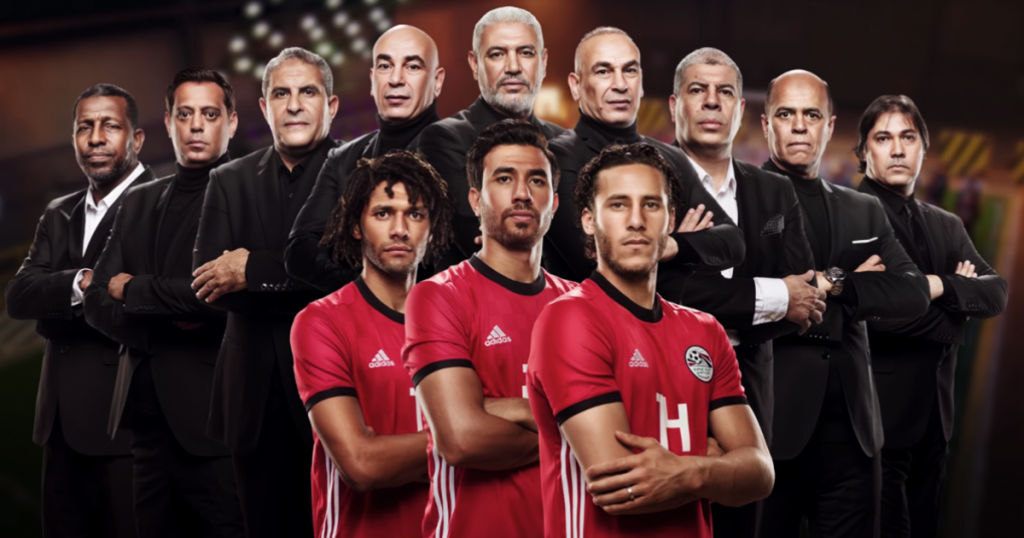 Ramadan’s shows have been getting bolder year after year. With a month-long sky-high viewing rates, television does not find a better time to flourish by presenting a plethora of new shows. Similarly, the competition in the TV advertisement game has been going strong. This year, marketing agencies had to come up with new, creative ideas to sustain the TV audience during the 10-minute-long show breaks. An ad with a bunch of actors and superstars singing a song about the gathering of Ramadan (or in Arabic “lammet Ramadan”) does not do anymore. And with Egypt making it to the World Cup after 28 years, a theme presents itself. The following list includes our top picks for the best World Cup-themed ads that interrupt our shows and YouTube binge-watching time. 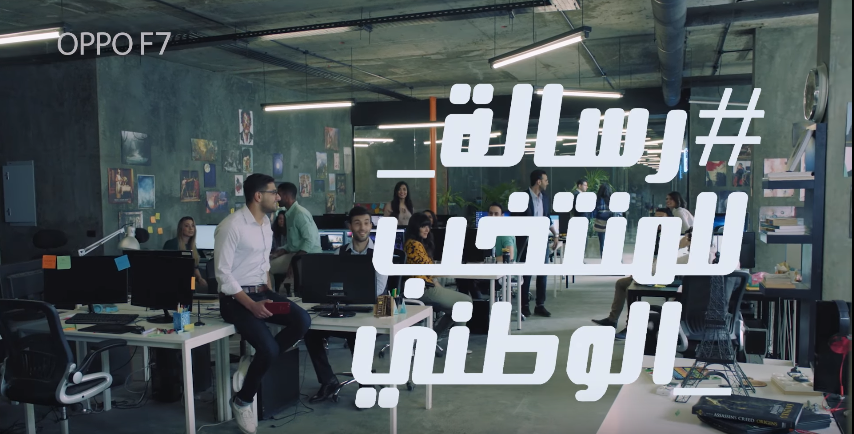 Caption: OPPO’s ad starts with the hashtag #AMessageToTheNationalTeam. Photo Credit: OPPO.
OPPO is an unexpected contestant in the marketing competition, but their brand new ad is witty enough to make it one of our top picks. As official sponsors for the football national team, their ad starts with the hashtag #AMessageToTheNationalTeam, and several video messages from their fans ensue supporting the team. Naturally, the video messages are all filmed by OPPO F7 which capitalizes on its 6.23″”FHD+Super Full Screen, and 25 MP AI-Powered Selfie, as visually pointed in the ad. 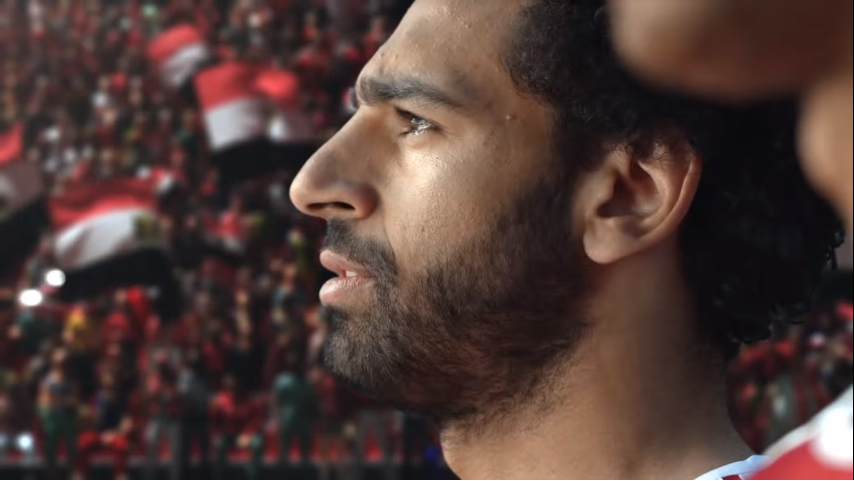 Caption: Vodafone-Pepsi’s ad referred to Mohamed Salah as Egypt’s Pride. Source: Vodafone Egypt.
The ad starts with rhythmic beats that initiate an atmosphere of anticipation, and is followed by a lively football commentary till the very end. The ad starts by showing an old man packing the Ramadan lantern and a young boy in a cafe removing the Ramadan decoration; symbolizing the end of Ramadan. Then, a group of youngsters takes out the Egyptian Flag which one spreads across his car, and another old man displays at the window of his shop; to bring about a sense of pride after Egypt’s qualification to the World Cup after 28 years. The ad ends with several glimpses of football fans in distress watching the match together in a flat, or cheering in the stadium, or praying for their team at the cafe where they watch the match. Everyone is fired up when the name of Egypt’s pride, Mohamed Salah, is mentioned. As Salah walks towards what seems like the gates to the pitch, the commentary echoes at “this historic moment” and the ad ends.
The short advert, as simple as it may appear, nails it when it comes to capturing Egyptians’ emotions throughout the national team’s journey that led to the World Cup.

Juhayna’s ad may be an oldie but it is definitely a goldie. It is always a risk when marketeers opt for a more comedic element in their ads, but Juhayna’s risk is carefully calculated with an ad that had Egyptians laugh their hearts out. In the ad, a mother, a brother and a friend tell the story of Mabrook who went mute after watching Egypt – Zimbabwe World Cup (dis)qualifying match in 1994, and hasn’t been able to speak since. Mabrook’s doctor diagnoses him with a “Conversion Disorder” that can only be treated if something as equally shocking as Egypt’s disqualification occurs, such as Egypt’s qualification to the World Cup. The video shows the deterioration of Mabrook’s health status as 24 more years pass without Egypt’s participation in the FIFA World Cup. The video ends with the mother’s plea to Héctor Cúper, the national team’s captain, asking him not to break Mabrook’s heart again, and Mabrook’s friend prays that Egypt reaches the finals because he wants to listen to Mabrook’s voice.
The ad concludes with the messages, “There are a 100 million Mabrook(s) waiting for Egypt to make it for 27 years,” and the hashtag, #WeAreAllMabrook.

Another entity that is able to achieve the tough equation of an emotional, nostalgic, yet comedic advertisement is the mobile operator, Orange. The ad is the 23rd most trending video on Youtube Egypt, having earned more than 4 million views so far (only after 4 days from its original release). The genius ad displays a catchy song that could easily couple as national cheer for the national team, sung by different crowds in different Egyptian settings. The genius idea is that the faces of the crowds show an uncanny resemblance to the faces of past football team coaches such as Farouk Gaafar, Hassan Shehata and Hossam Hassan. The concept springs from the notion that all Egyptian turn into professional football analysts when watching a match.

Caption: Chipsy releases a song by Egyptian Singer, Abu.
Chipsy released a new song by Abu on the 13th of June in preparation for Egypt’s first World Cup match. The music video shows splendid views of different areas in Egypt: the Pyramids, the temples in Luxor and Aswan, some beaches and Montaza bridge in Alexandria. The lyrics pridefully recounts the old history of Egypts, and the pharaonic ancestry of Egyptians.

WE, the official sponsor for Egypt’s national football team, features some of the 1990 team members: Ahmed Shubair, Hany Ramzy, Ibrahim Hassan, Hossam Hassan, and Taher abou Zaid, who were the last team to qualify before the start of the 28-year absence. The veterans would then sing, giving this year’s team players: Ramadan Sobhi, Mohamed El Meny, and Mahmoud Hassan (aka Trezeguet), a pep talk and advice from their experience at the 1990 World Cup. The lyrics of the song is cheerful yet provides a powerful insight: “it doesn’t matter who we play against because they’re a team of 11, we are a team of millions.”

Caption: Mo Salah gets in the backseat of his Uber car to continue his journey in this ad.
At the beginning of this year, Uber announced that Mohamed Salah is its ambassador in Egypt for 2018. The advertisement showcases the journey that Mohamed Salah has been through via a dramatic commentary, as he walks purposefully in a huge garage, with his wardrobe changing with every step. It starts with a metaphoric, “Who says you’ve arrived? You have a long way to go.” The commentary then lists, with every step, all of Mohamed Salah’s achievements from the best player in Africa, through the best striker in the league, to the best player in England. The scene turns into top-notch animation as Salah swiftly swivels the football through and away from other players. A large statue of Mo Salah appears in the warehouse, as Salah rides in the backseat of the car, ending with a powerful statement from the commentary, “Where else do you want to go?.” It proceeds, “On his way, he continues” as Salah gets in, “and we are all with him.”
The video is powerful with emotions, wordplay and intelligence, impeccably executed through the great direction and animation that takes care of the smallest, slightest detail.

In Photos: Cairo Citadel’s Iftar Cannon Goes off for First Time in 30 Years