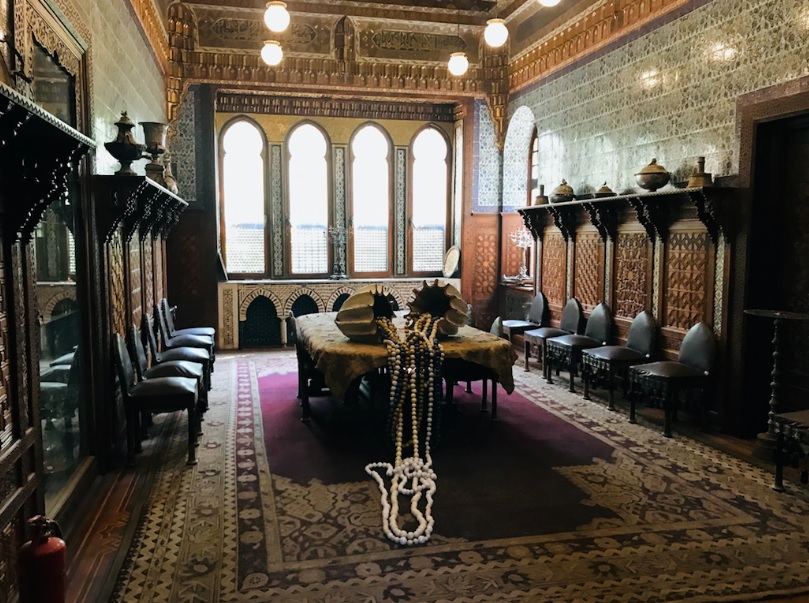 In the Northern half of Cairo’s Rhoda Island, inside the Manial Palace, amongst the many historical buildings, Persian garden and English lawns, Nadine Abdel-Ghaffar and her team of curators created one of the most spectacular public displays of contemporary art in Egypt this year.

Set inside the quaint palace, the opening took place on Saturday where over 300 guests were in attendance including prominent Egyptologist Zahi Hawass.

“Nothing Vanishes, Everything Transformed”, is part of series of pop-up exhibitions, contrasting cutting edge contemporary art work against the backdrop of some of Cairo’s most important cultural institutions and heritage structures, such as “Eternal Light. Something Old, Something New”, a pop-up show also held at the Egyptian Museum in Garden City.

An innovative clash of time and space, old and new, the art pieces are the prima donna and the stars, but unlike a typical 18th century opera, the setting and the walls also have their stories to tell.

Nadine Abdel-Ghaffar, curator of the exhibition, proclaimed at the exhibition opening ceremony that “Art is amazing, because it is a dialogue without needing to speak a language, it is a way to bridge Egypt and other countries”.

She wishes her exhibition would place Egypt on the international map in terms of contemporary art and culture.

”Promoting Egyptian culture and art is not just a business or hobby for me, it is also a matter of survival for the nation,” she tells Egyptian Streets.

Among the artists featured, Geneva-based Egyptian artist Alyaa Kamel plays with light and shadow, with her oversized canvas painted with human figures of all shapes.

Kamel Manial palace with her parents when she was young; she remembers vividly that the washroom on the second floor was the only room has decent amount of sunlight and view of the garden.  Years later, she requests very same room for her work.

“The Illustrated Bronze History of Time” by Hafez, consisting of family portraits and photographs on the ground, mementos of Mustafa Naguib (1913-1990), who was an active patriot in the same exact historical space and time along the last royalties under the Ottoman empire rules on the walls.

“Some say history are written by the victors, but here I provide an account of history that is written by the locals, the people who actually experience at a very personal and day to day level” he tells Egyptian Streets.

Hafez attempts “to bridge Egypt of the monarchy and that of the first Republic; a continuum of both worlds that failed to blend despite the passage of time.’’

In the garden right outside of the Residential palace’s traditional Islamic doorway, which was decorated with glorious blue faience tiles by Armenian ceramist David Ohannessian, artist Maged Mekhail has his ultra-minimalistic conceptual sculptures placed alongside the work by one of Egypt’s most famous sculptors Adam Henein.

Generations of artistic talents, from architecture and ceramics to modern and contemporary sculptures, each could stand on their own but together they shine brighter as they reflect and refract on each other.

The wielding gravitational push and pull results in a big bang of magnificent firework.

Gallery owner and expert Karim Francis says Mekhail and him were very much inspired by the landscape and history of Manial Palace, which affected their decision for selection and placement of pieces.

Egypt has a deep cultural and artisanal heritage. This is easy to forget amongst the dust, noise and heavy traffic, but tucked inside the Manial palace, it is easy to get a taste of.