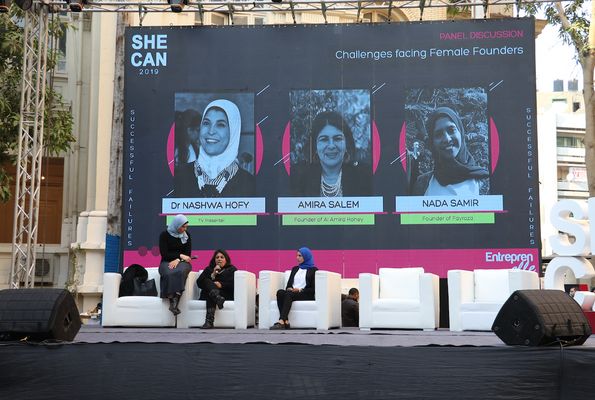 What is more difficult than being an entrepreneur is being a female entrepreneur. Egyptian women struggled to crack into this male-dominated for several reasons including societal restrictions and financial inclusion. Here we have stories of women who were able to conquer their field despite all the hurdles.

After 30 years pursuing a certain career, Amira Salem, founder of Al Amira Honey, decided it was time to create her own business out of something she loves in her early 50s. She already had a beehive in the family, so Salem decided to expand it and turned it into a business where she distributed honey products.

Her journey then began. “When I would visit the market, I discovered that people do not eat honey. I was so shocked because I love honey! So I decided to do honey jams, honey butter, honey ranch,” she says.

“The first challenge was that I was changing my entire career. I was working in an office and never went to the field. So, this was the first time I was working in the field,” Amira continues, “Knowing that Minya is the biggest honey producer in Egypt, I knew I wouldn’t be able to sell my product.”

To tackle that, Amira decided to move to the capital Cairo, where she is able to market her product with limited competition. “My first week in the market, I went home and decided to quit because when I would go to people and tell them that I’m selling honey, they immediately say ‘No, I don’t want it’, or they would take the product and disregard it afterwards.”

Although people were not taking her seriously, Amira still persisted and decided to develop her marketing skills. She joined Enterprenelle where she had access to marketing and communication courses. The honey producer recalls “They opened up channels for me that I didn’t know. People started knowing about me through Entreprenelle. I even learned how to deal with people.”

Learning how to deal with people was an important skill, because being in the market where the entrepreneur directly deal with his or her distributors and consumers is different that dealing with people in an office environment. Ultimately, Amira’s persistence lead to her success.

Another inspiring female entrepreneur from a younger generation battled to achieve her dreams. Young Nada Nada Samir decided to pursue a career in fashion at the young age of 15. “After I finished middle school, I decided that instead of going to high school, I was going to apply for a scholarship program outside Egypt. So, I studied fashion design in Italy for five years.”

It is important to note that when Nada traveled to Italy, she did not know the language.Her biggest challenge was leaving her family. Nada comes from a background where it is not common for women to travel on their own.

Upon her arrival to Egypt, Nada launched  her own fashion brand ‘Fayroza’ with the aim of producing unique quality clothing at an affordable price. She had a hard time finding people to work alongside her, so started giving  fashion design courses. This was her way of solving the labour problem.

According to Rania Ayman, founder of Entreprenelle, most female entrepreneurs face similar challenges, but many challenges in marketing their products as well as accessing funds. This sparks from the limited access to knowledge that women have. “SHE CAN is a great pool for new startups who want to kick off their businesses.”

Rania explains that “As a single founder, my main challenge was that I am a single founder, so I had difficulty delegating tasks to my team. By time I learned that its necessary and it helped us achieve what we achieved this far, because they do a better job than if I had done it alone.”

Entreprenelle’s founder noticed that people do not take female entrepreneurs seriously. Society dictates the natural flow of women’s life, meaning women have to get married, have and raise children, which formulates a big challenge for most women who are interested in the field. “This wouldn’t be a challenge if women picked partners who support and help them,” Rania clarifies.

Because of the lack of support surrounding women in this field, many of those who are interested in entrepreneurship lack self confidence. “We try through our programs to trailer towards the needs of women and wants of women,” Rania explains,” This is how we are able to create a panel hosting two women from two different fields of entrepreneurship, one in her 20s and the other in her 50s, both confident and have something to say and add.”

The Twin Sisters Aiming to Create the Next Generation of Creative Entrepreneurs
Over 40. Woman. Mother. And Still Working.

Over 40. Woman. Mother. And Still Working.
The Twin Sisters Aiming to Create the Next Generation of Creative Entrepreneurs