“We Live in Cairo”: a Musical Rendition of the Egyptian Revolution Comes to the US Stage

Egyptian Streets
“We Live in Cairo”: a Musical Rendition of the Egyptian Revolution Comes to the US Stage

An image seen in an international relations lecture – depicting a group of young Egyptian activists uploading photos and videos onto a Mac during the unfolding uprising below on Tahrir Square – became the impetus for “We Live in Cairo”, a musical show currently premiering at the American Repertory Theater in Cambridge, US.

Directed by Egyptian-American Taibi Magar and written by Patrick and Daniel Lazour, two brothers of Lebanese descent, the impressive piece follows six young activists, as they navigate the jubilant 2011 revolution and its bleak aftermath: the tumultuous two years that included a military coup and a violent crackdown.

By capturing this seminal moment in Egypt, “We Live in Cairo” focuses on the inspiring ways in which a youth and social media powered rebellion was able to overthrow a president who had been in power for 30 years.

“Every day that we work on this musical, we are inspired by the revolutionaries of Egypt—those men and women who broke the wall of fear and risked their lives for their beautiful home,” reads the creative team’s contribution to the brochure.

There were a couple of factors that compelled Obie award-winning Magar to team up with the Lazour brothers for this project, not least having an Egyptian father, who was born and raised in Asyut.

“This piece provided a great opportunity to explore my heritage and deepen my relationship to this beautiful country,” the director shared with Egyptian Streets.

“The second reason was that I was given the piece shortly after Trump was elected. It was a time of great fear, and my inner activist was for the first time starting to awaken. I was suddenly and urgently invested in questions like “how far does one go for the love of one’s country” and “what are our responsibilities as citizens” and “how do we create a shared value system” and “how do you build democracy.”

Developed over a six-year-long journey of writing, reading and discussing, the play’s initial drafts “were fueled by the inspiring stories of overthrowing a dictatorship and forging a new democracy,” the brochure states.

“We were influenced by the social justice driven poetry of Ahmed Fouad Negm. We looked to the texts of Egyptian writers including Omar Robert Hamilton and Wael Ghonim, and had long conversations with scholars and artists, including Professor Tarek Masoud.”

Indeed, the research process for this project was incredibly thorough and involved: “Between the brothers and I, we read probably around 70 books,” said Magar.

Beyond engaging with secondary sources of various kinds, the research process involved an extensive trip to Cairo, where the creative team met “with many wonderful revolutionaries,” as Magar describes them.

Provided with the opportunity to be artists-in-residence at the American University in Cairo (AUC) and to ‘workshop’ a first draft with students there, the team was able to interact with and learn from many young individuals who had witnessed the revolution firsthand.

“It cannot be overstated how much it shaped the piece. It is wildly different now. And we are so thankful to everyone for their generosity in sharing their stories.”

The six main characters, whose stories form the narrative prism and whose relationships are fractured by politics, are ultimately all based on a composite of the many real stories heard throughout their research, and are made up of street artists, songwriters, activists and photographers.

The producers also chose to work closely with Ganzeer, a graffiti artist of the revolution, now exiled to America. “We actually approached him to do the artwork for the show and he painted some amazing murals for the lobby inspired by our work.” 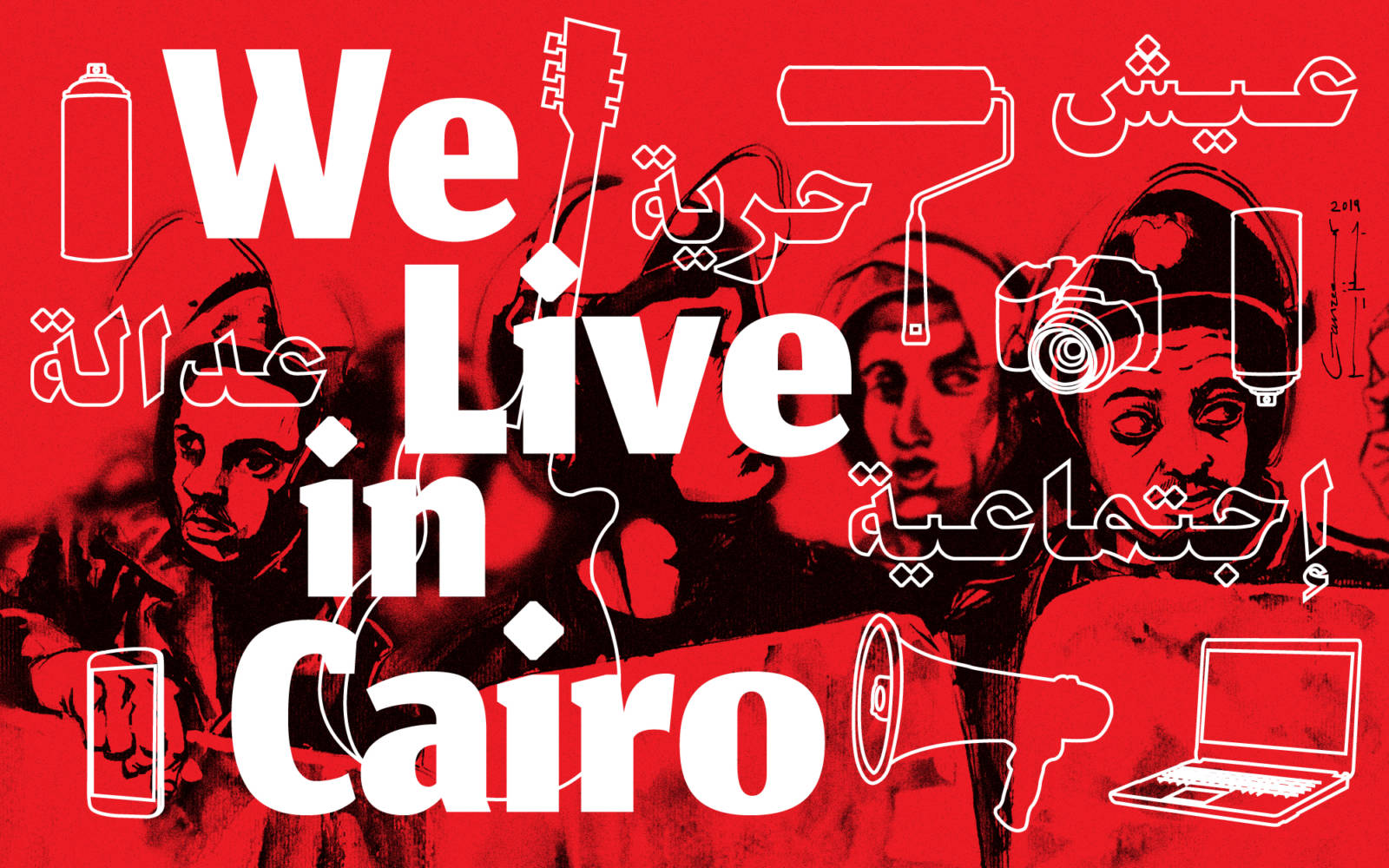 Music obviously plays a key role in “We Live in Cairo” and is one of the creative elements that has excited the Lazour brothers most: “We’ve been excited to explore the deep tradition of protest music, both in the Egyptian revolution and also in our country,” said Daniel Lazour.

Kindly sharing some lyrics with Egyptian Streets, director Magar made sure to emphasize “the power of music to create community, and shared language and articulation for what we are feeling and thinking as citizens.”

In response to our final question as to what the piece might leave the audience to ponder, Magar pointed to the fact that “it both allows the audience to experience the awe of revolution and the cost.”

“It would have been easy to romanticize it and end the play at Act 1. But it’s not the truth. By exposing Act 2, and everything that has happened since Mubarak’s downfall, we don’t shy away from the ways in which revolution has great cost. It’s a lesson we took from the incredible Egyptians who are still living and fighting every day for social justice and freedom: The struggle never ends. Democracy and freedom will always require work; every single day.”

While commenting on his personal experience, Patrick Lazour has related the play to the contemporary US context in that “it has made the show feel more urgent for me. This country is facing many challenges today, but I think it’s important to be aware of the freedoms we have here that the Egyptian people continue to fight for.”

“It’s never a one-to-one with these things, but I think bringing the story of the Egyptian revolution to people in the US at this point in time will help to broaden and illuminate the innate human desire for progress and change.”