Dutch Affinity for Antiquities: The Egyptian Collection at Leiden’s Rijksmuseum

One of the most fascinating truths about ancient Egyptian artifacts is that they can almost be found everywhere in the world. The fascination with ancient Egypt is as ancient as its monuments and for years, museums have competed to become the most elaborate hosts of artifacts, although this has sparked criticism from locals and experts alike.

Before the traffic of antiquities became regulated in 1983, European high figures and archeologists travelled through Egypt and collected a plethora of treasures, taking them back to their homelands where many are now permanently settled.

The Rijksmuseum Van Oudheden, tucked in Leiden – the Netherland’s own version of Venice – is a humble home to a reputedly beautiful collection, which through my visit, became a convincing fact.

“Over 1,400 objects from the world-renowned Egyptian collection of the National Museum of Antiquities are on display in the permanent exhibition Egypt,” reads the museum’s official website. “The highlights naturally include the museum’s fascinating mummies and their colourful cases. The exhibits tell the story of Egypt, one of the most imaginative cultures of ancient times.”

A ticket to the museum is around € 12,50, it allows entry not only to the only museum which also features permanent collections of ‘The Dutch and the ancient Near East’ , ‘Classical World’ and ‘The Netherlands in Roman Times’, but allows entry to the Hortus botanicus Leiden minutes away by walking.

In a dark and cool yet superbly light room, a variety of Egyptian artifacts are displayed. One starts the exhibit, which takes the entire first floor of the museum, from left to right.

The first galleries presents several rows of ancient Egyptian artifacts highlighting the history and evolution of the country. It starts off by recounting the topography of ancient Egypt and looking at its very earliest historical records and events up thus focusing on the periods from 10, 000 BC to 1000 AD, thus from predynastic Egypt all the way to its Greco-Roman period. On the side, there are key or thematic exhibits which explore certain themes like ‘writing’, ‘religion’ and ‘kingship’.

Among the fascinating items displayed are beautifully decorated jewelry, the double statue of Maya and Merit, the reliefs of General Horemheb (who lead Tutankhamun’s gallery) and various yet ornate items pertaining to daily life. 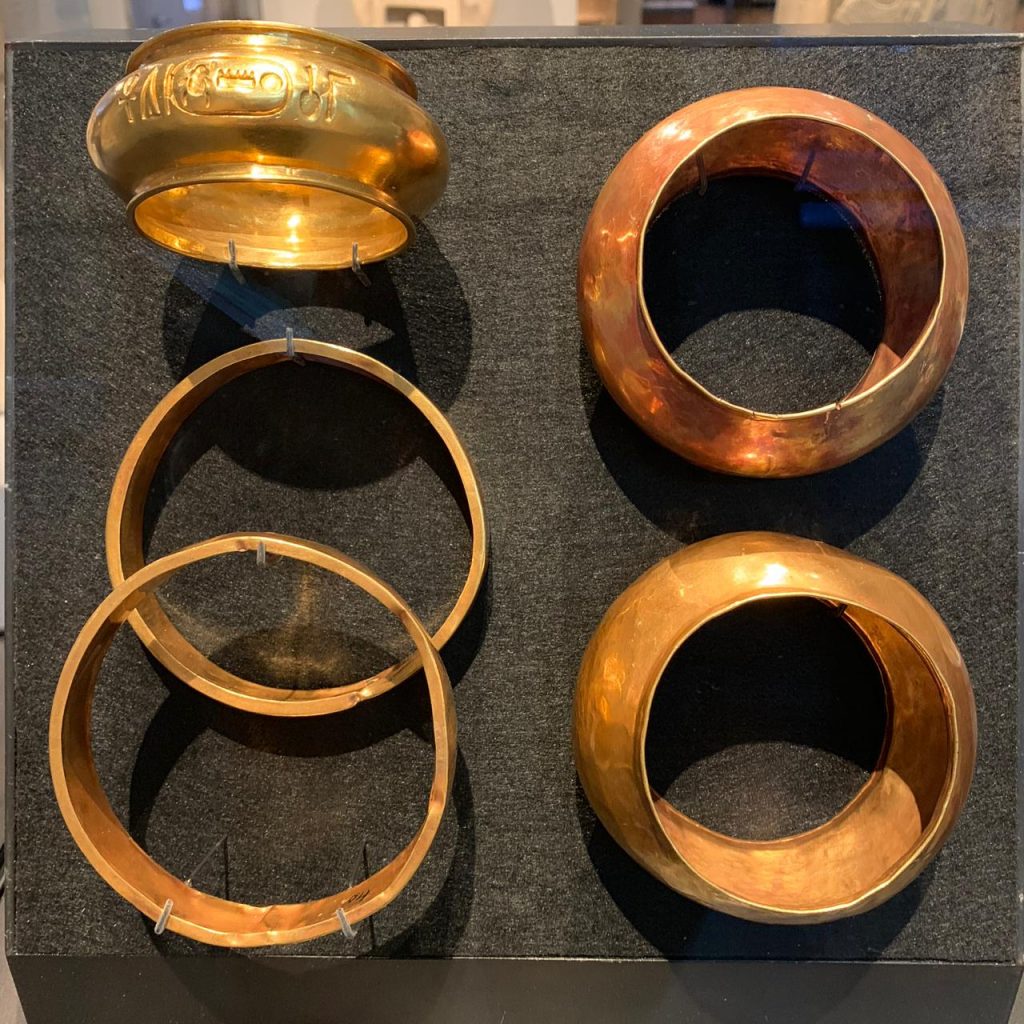 A side gallery also features an entire collection to its famous mummies and mummy cases which is truly breathtaking as the coffins are displayed in a way that not only shows the exquisite decoration on the outside but the inside decoration as well. The museum is well aware of ethical concerns when exhibiting the deceased, as such, the objects are displayed in a shrine-like construction out of direct sight and relatively close o the rear wall of the room in order to encourage a respectful exhibition and distance to the human remains. Moreover, the attractive mummy room features panels explaining human and animal mummification techniques as well as their religious significance.

Lastly, the Egyptian collection is crowned with a gallery focuses on the museum’s very own excavations at Saqqara.

It is surprising that Leiden would have such high-quality artifacts homed in its museum. One clear criticism, however, is the lack of proper labelling the museum has as many objects are written with insufficient historical context and crucial details related to their provenance, and significance. 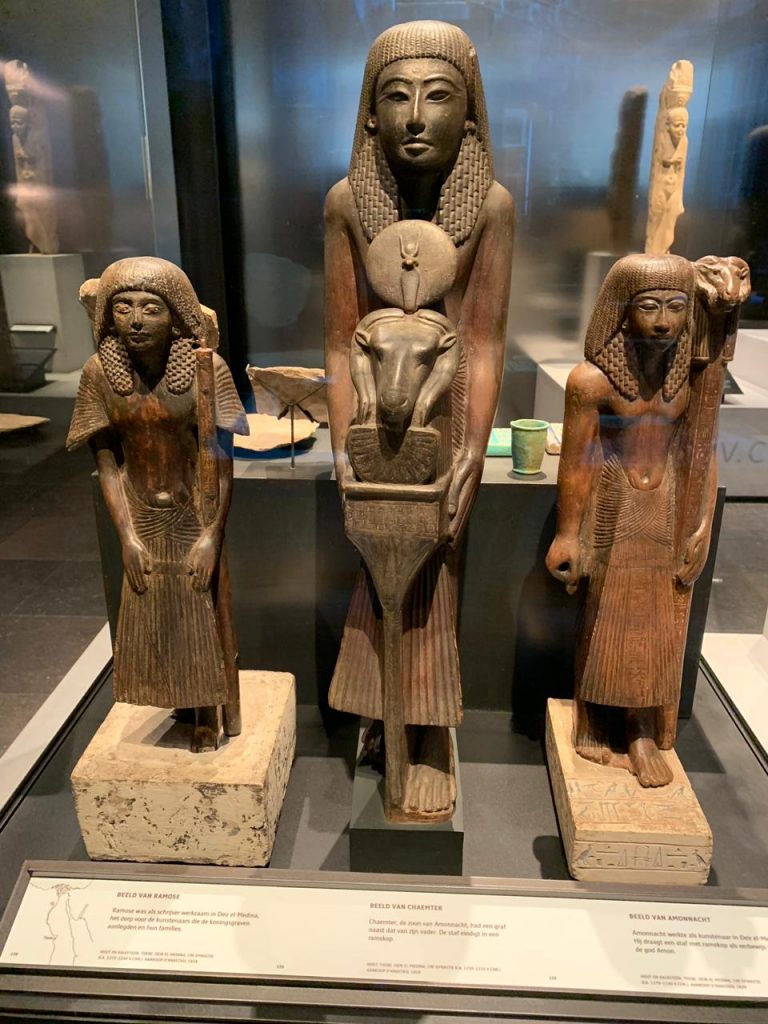 However, the crowning feature of all was the temple of Taphis (Taffeh) from Nubia, at the entrance inside the museum. In the afternoon, a row of carefully arranged seats are placed in front of the facade of the temple. The lights dimmer and right on the thousands of year old stone of the temple, dancing visuals play, through LED lighting, on the temple narrated by a voice which highlights the importance of the artifacts in the museum. This is the impressive “Mr. Bean Projection Art’’ show which was funded by ‘BankGiro Lotterij’ which is accompanied by a story and music.

The words, the shapes which range from two Roman soldiers fighting to wedjat eyes clad in gold, are touching. They tell the story of the temple, of the museum’s aim and the contribution of ancient archeology to humankind.

The temple was a gift from Egypt to the Dutch people in gratitude for the Netherlands’ role in a UNESCO rescue operation in the 1960s. The building of the high-dam in Aswan caused severe floods and created a risk for several temples in the South to be submerged under Nile water, as such, Egypt enlisted the aide of UNESCO to relocate these temples of which the most famous was Abu Simbel.

It is heartwarming to see that the temple, given to the Netherlands for its assistance at the flood, is used smartly, owing to the interests of the digital age of 2019, and is highlighted in a very special way. In its digital reuse and performance, the temple comes alive once, perhaps in a way that thousands of objects don’t as they rest dustily in the Egyptian Museum in Cairo. 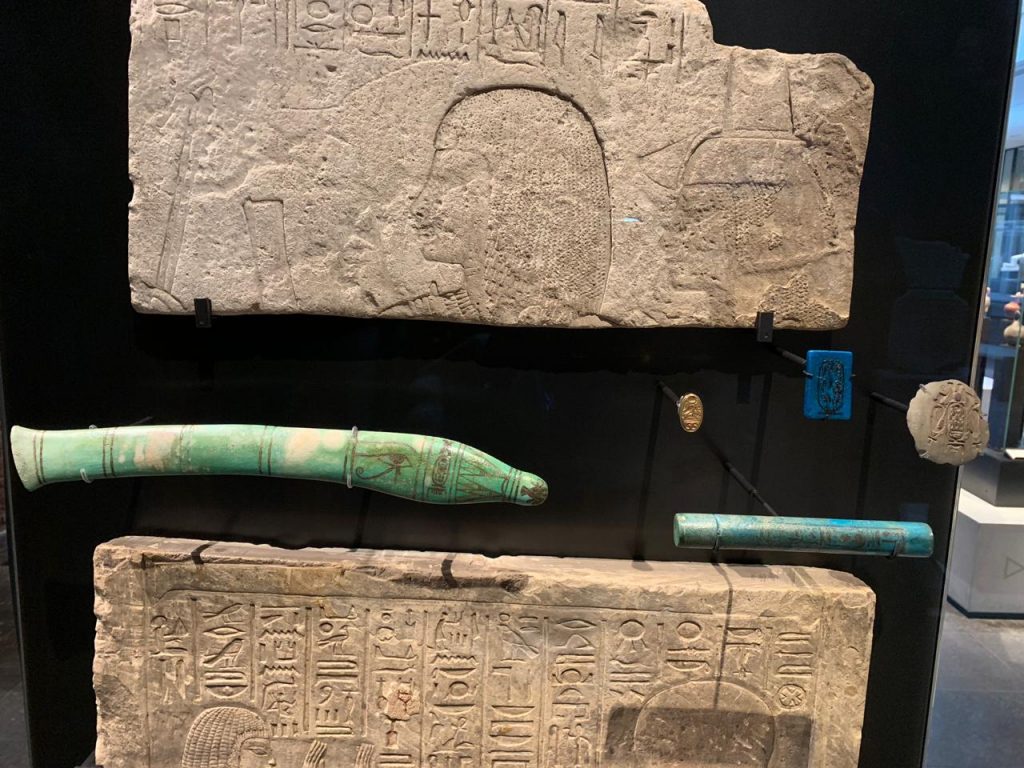 All other images are courtesy of Sherin Sabry.

Inspired by the River: A Diverse Selection of Films Featuring the Nile
“Qaaf”: A Gallery, an Art Space, a Community

“Qaaf”: A Gallery, an Art Space, a Community
Inspired by the River: A Diverse Selection of Films Featuring the Nile