“Politicians are living in the dinosaur age,” George Osborne, former politician and editor of the London Evening Standard, once said. The old style of politics that includes televised conferences, scripted speeches, press releases and formal interview appearances all seem to belong to a different age where 45 percent of the world’s population did not have a social media account to use most of the time.

We are living in a time where an American congresswoman such as Alexandria Ocasio-Cortez can be seen doing live videos of her eating popcorn while talking politics to her Instagram followers inside her own apartment. Many others, including newly elected Finland’s Prime Minister Sanna Marin, Bernie Sanders have started to use social media for various purposes, whether it is to steer national conversation, set legislative agendas, or simply even craft their own ‘image’ the way a celebrity does.

There a number of scholars that have already discussed how social media is changing the way politicians or leaders communicate. From placing advertisements on social media platforms to build political campaigns, sharing information on policy goals through simplified social media posts, and building a ‘brand image‘  as in the case of the United Arab Emirates, it is clear that social media has now increasingly taken over the world of politics.

Climate change is here + we’ve got a deadline: 12 years left to cut emissions in half.

A #GreenNewDeal is our plan for a world and a future worth fighting for.

How did we get here?
What is at stake?
And where are we going?

Other governments, however, have yet to craft a clear approach as to how to approach it. Seeing social media merely through security lens misses out the big picture and fails to grasp the realities that are unfolding. All information – everything that one needs or wants to know – is in public. All you have to do is research for it.

No amount of censorship of social media and the internet can hide anything anymore.

This morning, I went through a list of all the names in Egypt’s cabinet. I should perhaps start by admitting that I previously did not follow many of Egypt’s politicians closely on social media, other than Minister of International Cooperation Rania Al-Mashat and the Ministry of Foreign Affairs.

My lack of attention to the other political figures in Egypt and their work could be explained by their little to very much absent activity online. Each time I searched a name, it was mainly the ministry’s main page that would come up, or a poorly activated social media account. There are rare exceptions such as former minister Sahar Nasr, Dr. Tarek Shawki and under-secretary general of the United Nations Ghada Waly, whose names and social media activity were easy to track, yet they were usually found on just one platform and remain inactive on others.

Yet Rania Al-Mashat’s social media activity, on the other hand, is active, managed, and distinctive from the official ministry’s account. Though I did not track her increase of followers or engagement over time, one can simply look at the comments and reactions to her posts and recognize how her social media activity is building a profile for her and her work.

Focus on the third “C”: Confidence. The silver lining between confidence and arrogance is competence. Find your niche and grow your competence.

Her captions feel unscripted and authentic. In some of her posts, she often speaks directly to her followers, as she says in one “Focus on the third “C”: Confidence. The silver lining between confidence and arrogance is competence. Find your niche and grow your competence.”

The reactions and responses to her posts also show the fruits that come out of her social media activity, which do not focus merely on her public work, but also on her personally, revealing the growing connection that is being built with her followers. “You were my role model last semester,” one said, and another noted that her posts “resonate” with him. 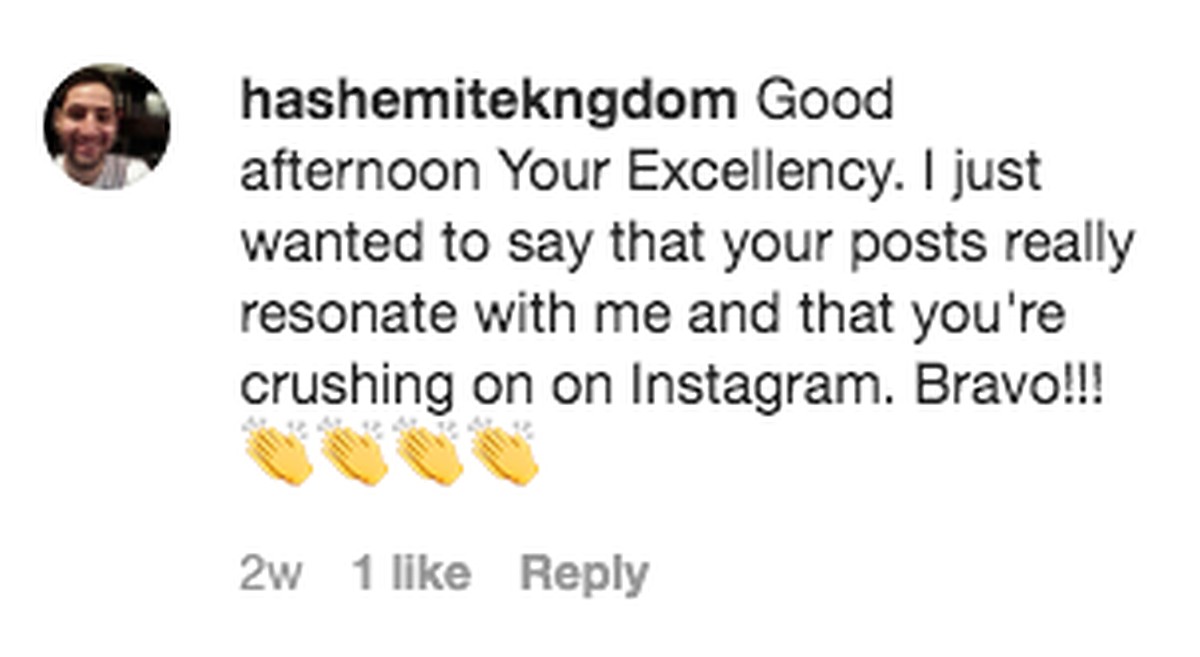 Not all of her images look strictly formal with professional attire. Sometimes, she wears her own casual clothes, poses and smiles as though she is taking an ordinary Instagram photo to share to her friends and family.

There is an instant feeling that she wants to reach out to her followers. She wants to communicate, share, and serve. It is this feeling – or ‘brand image’ – that is transmitted from her social media profile that can also be essential in building legitimacy and support for her policies.

Rania Al-Mashat is a reminder that politicians were not just appointed to serve, but also inspire, lead, and effectively communicate. It is an art that cannot be represented under just one leadership, or one governmental institution, as each public servant has their own visions, personality, and ideas that must be communicated through their own words.

Egypt’s future coming generations will have grown up and lived much of their youth on social media. Public figures will need to change their ways and communicate with this new generation effectively. As Jeff Jarvis once said on Ocasio-Cortez, “Twitter, Facebook, et al are not means to make a mass, like TV was. They are means to develop relationships and trust and to gather people around not just a person but also an idea, a cause, a common goal. That’s how Ocasio-Cortez uses them.”

Social media, in this case, is a great platform to bring more openness, transparency, honesty, and – more importantly – connection. It can provide more than just fake news.

A New Perspective: Benefits of Taking an Acting Course for non-Actors
Striving to Belong: Reflections on Growing up with a Dual Nationality

Striving to Belong: Reflections on Growing up with a Dual Nationality
A New Perspective: Benefits of Taking an Acting Course for non-Actors