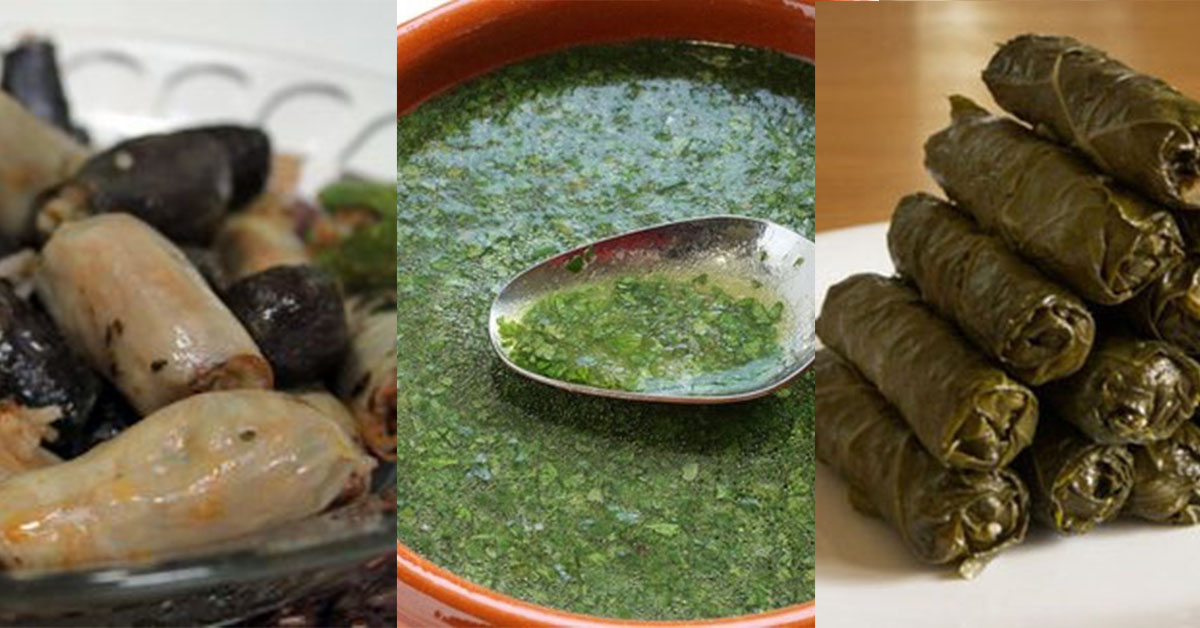 With the general population practicing self-isolating and quarantining themselves at home, now is the time everyone experiments with things they have always wanted to do – like cooking, for example. Some people are just starting to get into it more, while others are on their way to becoming the next Masterchef.

That being said, with all the contemporary and western recipes that can be found online these days, it could be refreshingly different to opt for mastering a traditional Egyptian household dish instead. By familiarizing oneself with the aromatic flavors of home, not only will these dishes remain a staple household item for generations to come, but they will also carry a special kind of meaning to their already hearty nature.

The following recipes are three traditional dishes in their simplest forms; with time, they could be slightly altered or tailored to each person’s preference.

With its gooey consistency and garlicky aroma, Molokheya is a widely beloved Egyptian dish. This somewhat difficult-to-describe soup consists of mainly finely cut pieces of the molokheya plant (also known as jute or Jews mallow), mixed with water, garlic and chicken broth.

Although molokheya may seem quite daunting to make, it is actually easier than it seems. This particular recipe can serve between four to five people.

1. Ideally, to properly make molokheya, one must first boil a a whole chicken for about an hour on a stove-top. Place the chicken in a pot full of boiling water (high heat) that would completely cover the chicken and add salt and pepper to taste. One the chicken is immersed in the water, switch to medium heat. After an hour, your chicken broth is ready.

2. While the chicken broth is still warm, take three cups of it and add it to a different pot with 400 grams of finely chopped molokheya (frozen molokheya can be purchased from your local market, or one can freshly chop some molokheya leaves).

3. Make sure to keep stirring the molokheya with the chicken broth consistently on medium heat, until it forms a smooth and somewhat gooey consistency. At the same time, fry 1.5 tablespoons of garlic with one tablespoon of coriander in a separate pan until it has completely browned.

4. Once the garlic has fried, add it to the molokheya mixture. Here, Egyptians like to joke that one should gasp as the fried mixture goes into the soup, for a good omen that the recipe would turn out well. Bring the soup to a boil. As soon as bubbles start the form, turn the stove off and leave the soup to cool.

Another Egyptian household staple and favorite, stuffed grape vine leaves are also simpler to make than they may seem. This is one of those dishes that only gets better with time, as the popular phrase of ‘practice makes perfect’ stands true when it comes to stuffed vine leaves.

The following recipe can serve up to five people.

1. Once again, to properly make stuffed vine leaves, one must start by boiling one whole chicken in order to use its broth (see previous recipe for instructions). In the meanwhile, make the stuffing by mixing 750 grams of rice, 3 finely chopped onions, 1 kilogram of minced meat, 1.5 tablespoons of ghee and salt and pepper to taste.

2. Start placing about one small spoon of filling per vine leaf – make sure you cut the stems off the leaves Place the stuffing in the middle of the leaf and create a thin line, then fold the two sides inside atop the stuffing, followed by rolling the entire leaf into a thin finger-like shape.

4. Add the juice of three small lemons, one tablespoon of ghee and some more salt to taste to the pot. It is best to place a small plate on top of the mountain of stuffed vine leaves in order to have them stay together, and so none of the stuffing comes out.

5. After about 20 minutes, when the water starts to boil, check to see if the dish is ready by testing out one of the stuffed vine leaves. If the rice is cooked, then the dish is ready; if the rice still feels raw, then leave the dish on medium heat for another 10 minutes or so. If the water has evaporated, simply add some more boiling water to the pot.

Stuffed eggplants are quite popular across various Mediterranean countries; stuffed white eggplants however, are very much associated with Egyptian culinary culture.

The following recipe is a traditional Egyptian way of making stuffed white eggplants – a dish that is heartwarming, mouthwatering and will always give us a taste of home. This recipe can serve up to five people.

1. Start hollowing out the white eggplants so that they can be stuffed. In the meanwhile, make the stuffing by mixing the rice, with finely diced onions, finely diced tomatoes, the minced meat, 1.5 tablespoons of ghee and salt and pepper to taste.

2. Start stuffing each of the hollowed out eggplants, and then place them in large pot vertically (stuffing face up). Make a simple tomato sauce by placing half a kilo of tomatoes in a blender. Add the freshly blended tomato sauce to the pot. Turn the stove on medium heat.

3. Add water to the pot until it fully covers the stuffed eggplants. Add two more tablespoons of ghee and some more salt and pepper to taste.

4. Bring the pot to a boil – it will take around one hour. Make sure the stuffed eggplants have taken in most of the surrounding liquid, but make sure not to let it get too dry. Turn heat off, then let cool and serve with any remaining tomato sauce.