From Copywriting to Filmmaking: 3 Online Workshops to Maintain Quarantine Creativity 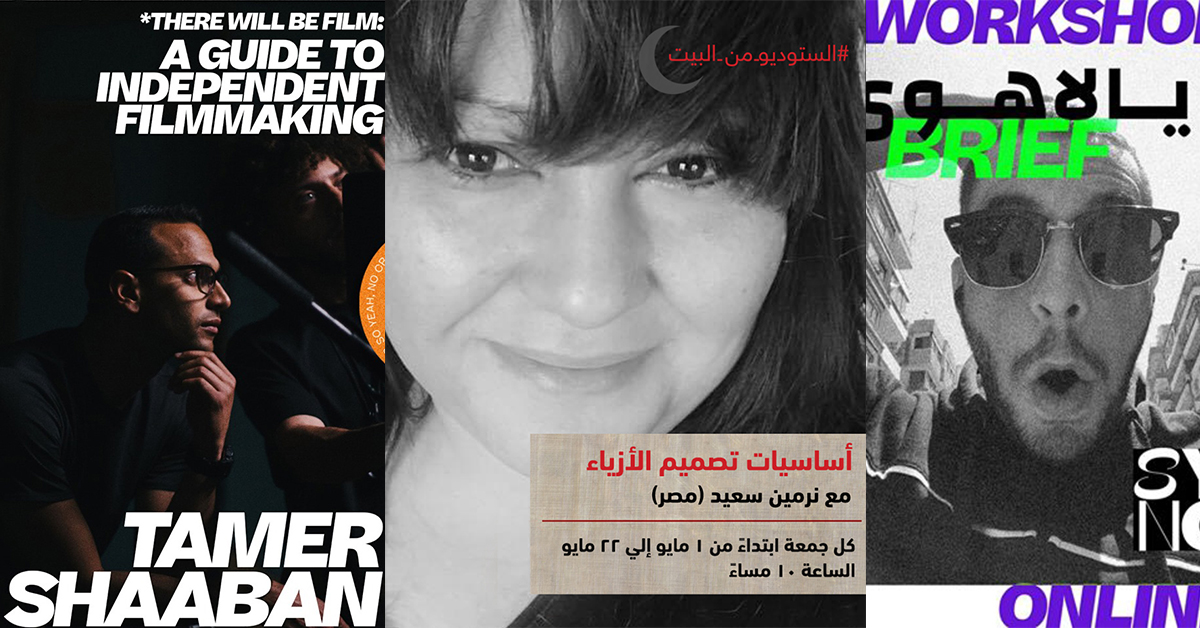 Before the current pandemic put a halt to various businesses across the country (and world), Cairo was sprawling with a wide variety of creative workshops readily available throughout the year – from dance, acting and pottery making, to writing, directing and painting.

Given the fact that most of these workshop require physical attendance in order to be as effective as possible, the COVID-19 outbreak caused a major halt to these group activities. There have been various local entities that have attempted to adapt to the current nature of the world and shift their services online, however not all have been able to do so successfully.

That being said, there are still a few local entities that are battling the odds in order to keep offering their various services to the public and continue to inspire creativity during these strange times.

This workshop is devised as a series of four video lectures that are scheduled to be shown every Friday at 10 pm from May 1 until May 22, as part of Studio Emad Eddin’s ‘Studio from Home Workshop Program’.

The workshop features well-known Egyptian costume designer Nermine Said and throughout the four lectures, she aims to discuss the importance, role and stages of costume design, as well as the differences between costume design for theatre and film, and fashion and styling.

Said is an Egyptian costume designer who graduated from The American University in Cairo (AUC) with a BA in Theatre. She also hold a MA in Folk-Theatre and received a diploma in fashion design and dress-making from the University of Pennsylvania in 2002.

This online workshop is offered free of charge, in addition to two other online workshops part of Studio Emad Eddin’s ‘Studio from Home Workshop Program’ – The Small Dance Project and Acting a Monologue, both of which have already begun and will continue until mid-May.

Sync School, a novel educational entity in the realms of filmmaking and advertising located in downtown Cairo’s Greek Campus, has recently released a series of four online workshops that people can follow at home.

Of these workshops is a four day independent filmmaking workshop that commences May 7th and lasts until May 10th. Throughout these two hour sessions, Tamer Shaaban will act as a mentor in guiding participants through the entire filmmaking process, with a focus on the director’s perspective.

According to the Facebook event page description, “The workshop will feature storytelling, character building, the director’s voice, scriptwriting, production and even post production.”

Shaaban has a wide range of experience in writing and directing. According to his official website, “In 2011 Tamer was awarded the YSA 25 Under 25 Most Influential Young people on HuffPost for his humanitarian work. He later received Microsoft’s MVP Leadership award for his work on a Documentary covering Microsoft’s Hurricane Sandy relief effort. In 2019, [he] was chosen as a finalist for the Commercial Directors Diversity Program finalist (CDDP) in LA, as well as won a Clio for Sports in advertising as the Director and Creative Director of the campaign.”

One of the other exciting upcoming online workshops coming from Sync School is a copywriting workshop with advertising guru Eslam Hossam.

This three day online workshop is scheduled to take place May 19, 20 and 21, for three hours a day. Copywriting is a great way to flex one’s creative muscles in trying to think of novel ways to sell a product or service, all while working on your writing skills.

According to the Facebook event’s description, “[Hossam] will walk you through the do’s and dont’s on breaking a brief, writing copy for an ad, and knowing exactly how to sell a product using your words… you will go through the entire journey that the copywriter takes to brainstorm, write and perfect the ad copy.”

Hossam is a beloved content creator, influencer and copywriter with years of experience in the field of copywriting for advertisements. He has worked on a number of successful local ad campaigns, and has also garnered a large following for his videos that feature a humor that is sarcastic in nature, yet that is highly relatable.

In addition to the Filmmaking and Copywriting workshops, Sync School is also featuring online workshops in Personal Branding and Producing, scheduled to take place throughout May.