The sweet sounds of early morning birds chirping, the soft roar of a motorbike in the distance, the murmur of bickering voices slowly getting louder with heated energy-  the scene is set, cue dialogue.

The sounds from our everyday lives usually go unnoticed, however, they can be more than enough to set a scene and reveal so much about where the scene takes place, or what time of day it is, or even whether the audience is set for a suspense, thriller or comedy.

Nothing is more representative of this very fact than audio drama. The beauty of audio drama is all about listening, truly listening, and envisioning what it is we are listening to. Before television, and when one could not afford many trips to the theatre, people’s main form of entertainment was listening to the radio.

“Audio drama is somewhere between reading a play and watching a play,” comments General Manager of Orient Productions Ahmed el Attar, “because you are not reading, you are listening – which is the part that resembles being in a theatre – but there is no visual, so you have to refer to your imagination which is like when you’re reading a play, so it’s an in-between world, which I think is very exciting.”

El Attar’s Orient for Film and Theatre Productions is a private production company that was founded in May 2007, with the hopes of developing a variety of cultural projects within the performing and visual arts fields. Since its foundation, there are a number of successful annual projects that have taken place in Egypt – two of which are the 2B Continued Theatre Festival and Lab and the Downtown Contemporary Arts Festival (D-CAF).

The newest project aims to introduce – or rather re-introduce – Egyptian audiences to the glorious platform of radio or audio drama. “This project has been going on for a year,” says El Attar, “it’s not just about the festival, the festival is the last stop of the whole process, but the process is mainly about transferring knowledge and getting people in Egypt today excited to look back at our heritage and history of radio drama, and getting them excited to work in the field today.”

The year-long process of Mawgat began with a series of workshops that were conducted by professionals both from abroad (namely the UK), as well as local professionals in the field. This was all facilitated with the help of Jonathan Banatvala, Artistic Director of International Arts Partnership – IAP.

The process itself consisted of a number of various phases, two of the main ones being the Mentorship Program and the outreach program. “The Mentoring Program – or Young Producers Program – started with 15 participants, and then that diluted to nine, so ultimately nice pieces of audio drama were produced,” commented Project Coordinator Heba Rifaat.

“With the Outreach Program however, we came out with 28 small pieces after visiting around six schools,” Rifaat continues.

The Outreach Program consisted of visiting various schools around Cairo in attempts to create a sort of one day crash course introducing children to audio drama and having them experiment with making their own.

In addition to getting contemporary Egyptians interested and excited about the wonders of audio drama, the team behind Mawgat also wanted to highlight Egypt’s rich audio drama heritage. This was done through the re-recording of four of the legendary Youssef Ezzeldin Eissa’s timeless pieces. According to the Mawgat official website’s homage to Ezzeldin Eissa, “The Egyptian audio drama began to be formed by the writer and storyteller Youssef Ezzeldin Eissa, one of the pioneers in this field. His first work for the radio was the theatrical evening (Wheel of Days) in 1940. Eissa afterwards presented about 400 works for the Egyptian radio.”

“I really wanted to get to know more about Youssef Ezzeldin Eissa, as well as audio drama in general,” says 35-year-old Sherif Moustafa Al-Yamani, one of the participants of the Mawgat project, “audio drama was also something that was completely new and different to me. I had always been interested in writing and doing voice-overs, but I never really thought about writing for radio, or immersing myself in audio drama.”

For most of the participants who took part in the year-long process, the experience of putting together an audio piece, from developing an idea to writing and eventually recording, was completely novel and exciting. Everyone’s pieces were different, everyone’s ideas showcased the versatility and creativity of people’s imaginations, and everyone’s sounds painted a different, vibrant picture – from a girl trying to figure herself out on her daily metro commute to a demon in search of help from a philosopher. 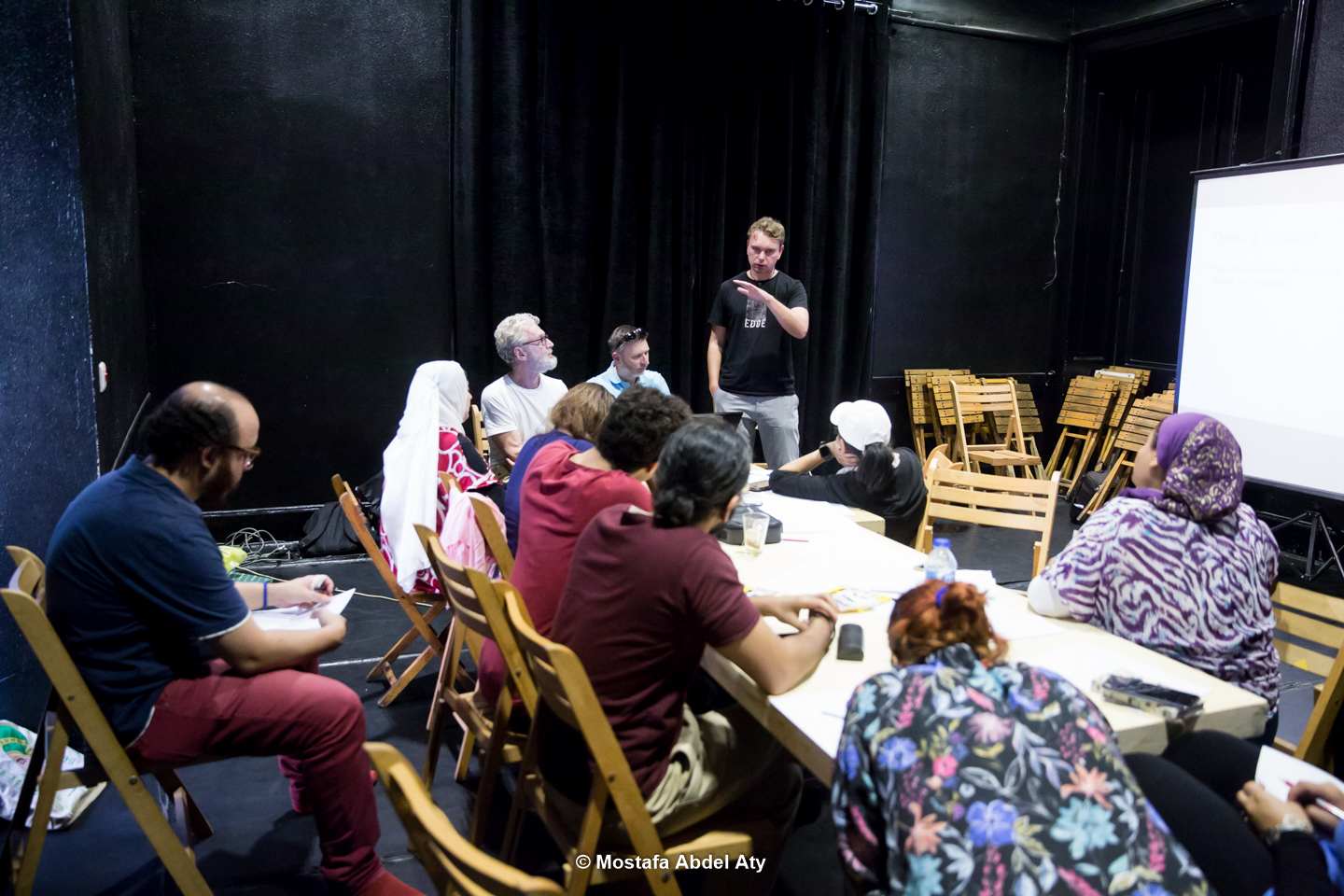 “Every art form is all about storytelling, the platform just differs,” says Al-Yamani, “depending solely on voice and sounds to communicate a story is very unique… I would love for people in Egypt to fall back in love with audio drama.”

Just as its name depicts, Mawgat is a project that has been sending waves of inspiration for all those who were a part of it, as well as for those who will be introduced to it through the online festival. “Hopefully we will keep developing and next year we can have alive version of the event as well,” says El-Attar, “hopefully the project and the festival will inspire and excite people to explore audio drama even more.”

“These are Very Confusing and Uncertain Times”: The Future of Zawya & Cinema-Going
7 Classic Egyptian Films to Binge in COVID-19 Lockdown

7 Classic Egyptian Films to Binge in COVID-19 Lockdown
“These are Very Confusing and Uncertain Times”: The Future of Zawya & Cinema-Going