Egyptian human rights activist Sanaa Seif was arrested on Tuesday 23 June and detained for 15 days pending investigations into various charges. According to a statement released by the Prosecutor General’s office late on Tuesday, Sanaa has been charged with spreading false news and rumours via her social media accounts for the purposes of “stirring public opinion against state institutions” and “disturbing security and peace and disrupting the institutions of the state from their work”.

The arrest came following allegations of an attack on Sanaa and her family. Mona Seif claims that a group of women assaulted and robbed her, her sister Sanaa and their mother, activist and scholar Laila Soueif, outside Tora prison in Maadi earlier this week.

The three women were reportedly waiting for a letter from activist Alaa Abdel Fattah—Mona and Sanaa’s brother and Soueif’s son—who, along with his lawyer Mohamed El Baqer, have been jailed since September 2019 on unknown charges and have yet to be tried. 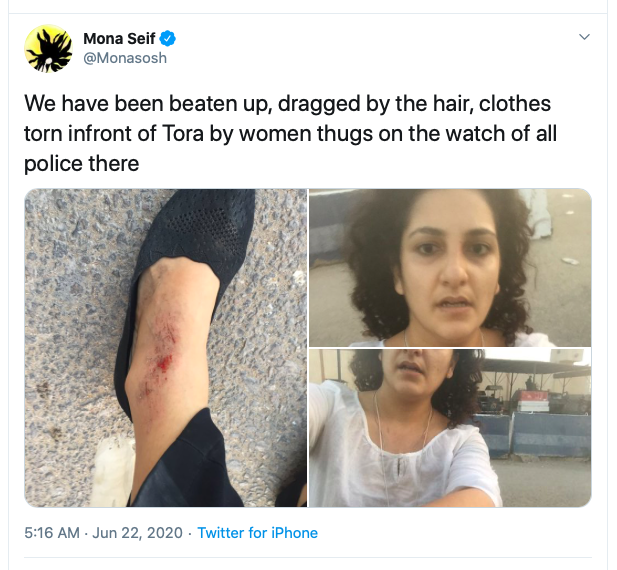 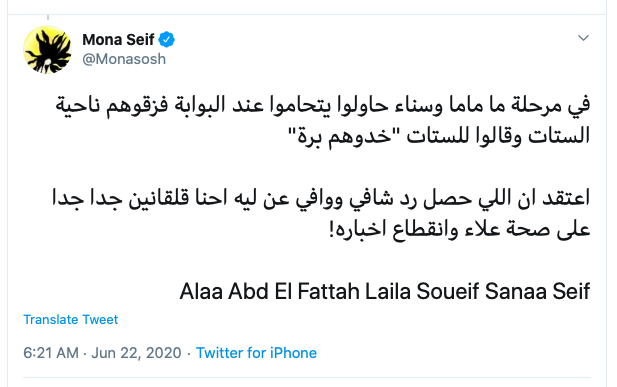 Mona claims that on Tuesday, on their way to report the incident, Sanaa was “abducted” outside the Prosecutor General’s office and later appeared before the State Security Prosecution.

The family had been waiting outside the Tora Prison for two days, hoping to receive a letter from Abdel Fattah, whom they weren’t allowed to meet with since the beginning of the coronavirus pandemic due to public health and safety restrictions enacted at prisons, which banned visitations.

What happened outside Tora Prison?

In a video posted to Facebook, Mona appeared emotionally distraught as she recounted the details of an alleged assault, saying that a group of women beat and robbed them, tore their clothes and dragged Sanaa by the hair.

Mona also claimed that the police officers stationed outside the prison wouldn’t intervene. The activist added that, at one point, the officers refused to let her and her family take shelter behind the barricades outside the prison and pushed her mother “toward the road so she would either flee or go toward the assailants.” She said that the officers told the assailants to “take them outside.”

In a separate social media post, Mona also claimed that before the assault took place, the officers had insisted that she, Sanaa, and Laila move “to the other side, away from the cameras.”

Sanaa was reportedly badly hurt after the assailants beat her with a stick. The family claims that her body is covered with bruises. In its statement on Tuesday evening, the Prosecutor General’s office said that all allegations regarding the attack are being investigated and that Sanaa, following her arrest, was taken for a medical examination to determine her health condition.

This is the family’s latest run-in with security forces. In February 2015, Abdel Fattah was sentenced to five years in prison for allegedly organizing an unauthorized protest, but was released on parole in March 2019 before being rearrested in September of that same year and transferred to Tora Prison, where he allegedly suffered torture and beatings.

Sanaa was previously arrested in 2014 and sentenced to two years in prison and two years of surveillance for protesting Egypt’s ant-protest laws and allegedly assaulting police officers and destroying public property. She was pardoned in September 2015.