Sublunary: Challenging the Norm in the Egyptian Music Industry

No matter where you are in the world, culture is almost always shaped and restricted by the mainstream – the music scene in Egypt is no exception to this. Sublunary, a 6-member progressive band founded in Egypt, pushes the boundaries of culture by reaffirming their right to occupy a creative space in their homeland.

Beyond this, the band hopes to reflect on the lack of care given to the many Egyptians whose talent is unrecognised due to the nature of the music industry not giving them the space nor value. The mainstream lacks in variety when it comes to music, leaving a mass pool of potential behind with no one to look up to.

Sublunary just released their first music video, “Harmonix Live at the Roman Theatre” in collaboration with Happy Days Films Production, highlighting this neglect and abandonment. The video, shot as the band performs in real time, creates an audiovisual orchestration that is honest, dynamic and encapsulates the human experience. Egyptian Streets spoke with Sublunary about the video, along with their upcoming music and journey trying to break through the mainstream.

Tell me a bit about yourself – how did you come to be?
We are an international progressive band currently based in the UK. We started years ago in Egypt, brought together from different social circles through our shared connection with music. By coincidence, the four Arabs of the group (Gigo, Ahmed, Ramy and Hadi) all moved to the UK to study, where we ended up meeting Tom Bell, who ended up producing our first self-titled E.P. Later, Carlos Bras joined the group and then it wasn’t long before Tom Bell officially joined the band as the sixth member and producer.

As individuals we’ve each grown up with a strong musical influence which has instilled in each of us a particular sensitivity to the craft. As painfully cliché as it is, long story short like most bands we were brought together by our love for music.

You have a unique band name, can you explain what it means to you?
It is in our nature to think too much about all of what we do and so naturally the name had to be meaningful. Sublunary, directly translates to the space under the moon. The word was used to describe earth in the very early stages of our understanding of physics. The particular reason it resonated with us was its connotation. The earth world was seen as the boring, humdrum, a material sphere of dirt which sat under the grand and deeply spiritual cosmos.

And so, we enjoy the irony of pursuing the mysterious, spiritual heights of art, creation, and trying to live up to the grand wealth of artists which have before us, while identifying by the mundane and the ordinary. We’re suckers for a cheeky little paradox.

What distinguishes your music from the mainstream, or other indie rock bands?
We’ve always struggled having to put our music in a box. The notorious question of “what genre of music do you make?” has always been a difficult one. Most popular music tends to communicate one emotion, it paints a single picture, a popular message that can be spread easily. The main purpose of Sublunary is Sublunary itself, to gather as many influences from around the world, and to try to pay homage to our different backgrounds through the progressive music that we write.

Our aim as a band is to show our respective cultures that the world is so much bigger that one particular genre or taste. We try to make music that is a little more true to the human experience. We try to write our songs akin to movies, scenes which have different emotional landscapes, and go through a journey. Most of our songs are not linear, they’re volatile, exciting and emotional, much like the environment in which we were brought up back home in Egypt.

We have always looked up to musicians with impressive technicality, and our musical ability helps us to write music that challenges us as artists. We want to provoke our listeners just the right amount to listen and engage with something that is different to what they are used to, whether that happens to be our music or a tangent that leads them to a new and exciting artist. The overall aim is to challenge the norm through our music.

You were founded in Egypt – what were the biggest challenges you faced in that regard?
For any aspiring musician pursuing a professional career, Egypt offers its own set of truly unique challenges, as well as an infrastructure that is still very much getting up onto its own two feet. Furthermore, as young impressionable artists you inevitably find yourself gravitating to western influences and role models; it’s not that there is a lack of talent to look up to back home but rather a matter of exposure. Unfortunately, it’s a limited and very selective group of artists who gain attention from the mainstream.

So naturally we found ourselves wanting to move abroad where the infrastructure is more inclusive and supportive. In the time that we’ve been gone we’ve been beyond excited to see this changing. Electronic music is creeping up from the underground, and new hip hop artists including Abyusif, Marwan Moussa, and Felukah are pioneering an implosion of Arab talent into the mainstream’s attention. However, we still find diverse genres being swept under the rug, and culture is still very much governed by what is popular. We are extremely excited to return home in the coming months along with our new international recruits. 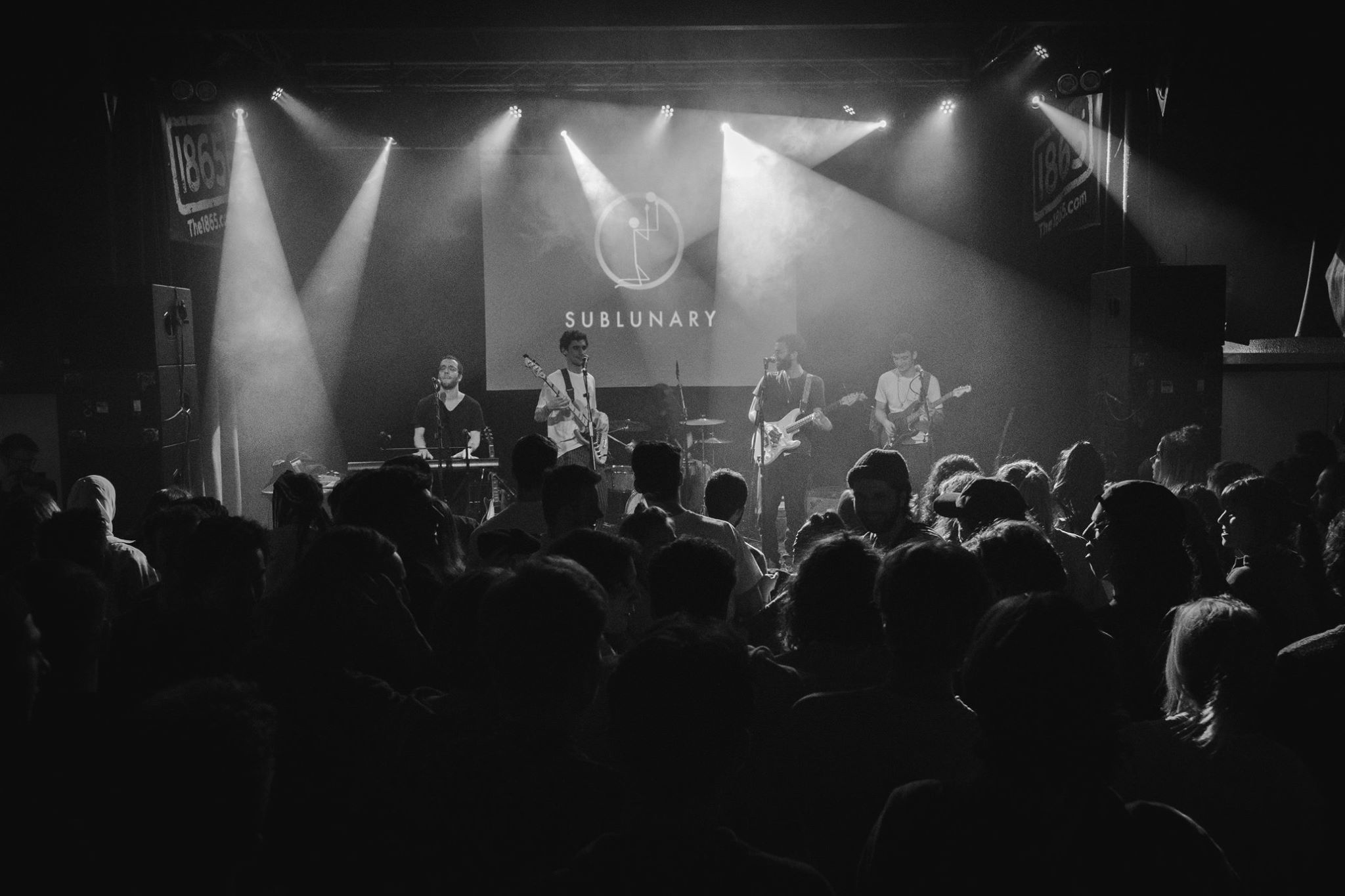 Who are your main influences?
As a band with members from four different countries, Sublunary acts as a hub for each member’s influences, both musically and culturally. Each member of the band is an avid music listener, with our diverse backgrounds making each one of us have distinct tastes in music. The genres that have inspired the band’s current sound most most would have to be progressive rock and jazz fusion.

Progressive rock is a genre most synonymous with famous bands like Pink Floyd, Camel, and Yes, while modern progressive rock is associated with the likes of Steven Wilson, Opeth and Riverside. In regards to jazz fusion, which incorporates the bass of jazz and other genres; bands such as Snarky Puppy,Yussef Kamaal, Alfa Mist and Kamasi Washington have influenced the band massively.

Music outside of mainstream Western culture has also brought the band closer together, specifically artists including Daffer Youssef, Hayajan, Mario Costa, and Pescado Rabioso, driving the band to connect different genres from around the world together.

Your video ‘Harmonix Live at the Roman Theatre’ is your visual first representation of yourself, can you touch upon the vision you had for it? The filming took place at the Roman Theatre in Marina 1 Sahel, can you explain this decision?
Since we are an independent band, we wanted to make a debut which was truly impressionable. The first and most standout aspect of the video was the location. The decision to play in an abandoned theatre in Egypt invited a lot of avenues for us to discuss our vision of us and the scene back home. The “Roman Theatre” has been abandoned for years, and while its hall hasn’t been filled in ages it still vibrates in residual energy.

As a band hailing from Egypt we take emphasizing the importance of music, art, and creative initiatives very seriously. The abandoned theatre serves as a perfect image to represent the negligence of art, and what happens when you do not engage with your local cultures and music scenes. The stadium also offers a perfect location for us to make a comment on inspiring a creative revival, by giving life to its absolutely stunning stage once again. Also, it reflects a personal artistic sentiment to musicians who grew up with a true love for the craft, spending hours on end “performing” to themselves with an instrument which beheld so much magic and mystery.

We picked Harmonix because it’s a big statement, the lyrics and performance are provocative and confrontational. It is written from the perspective of a protagonist who is confronting the world on its reluctance to change and detach from its beliefs. It’s a sort of defense mechanism. We are all familiar with that attraction to being right, in conversation, within ourselves, and in our perception and beliefs relevant to the world around us. The protagonist challenges us to move forward in what we believe, and be open to adapting and evolving our ideas.

This vision for the film could not have come to be if it were not for the genius behind the camera, the founder of Happy Days Films and long-time member of the Sublunary family, Greg J. Philipon. He was flown in from Marseille last summer in 2019. The shoot for the video itself was conducted in two days, using one camera, and virtually no budget, by the single French man who in supreme professionalism ran under the scorching Egyptian sun making no compromise in catching every angle and moment we needed. It was truly a special and unique pleasure to work with him. 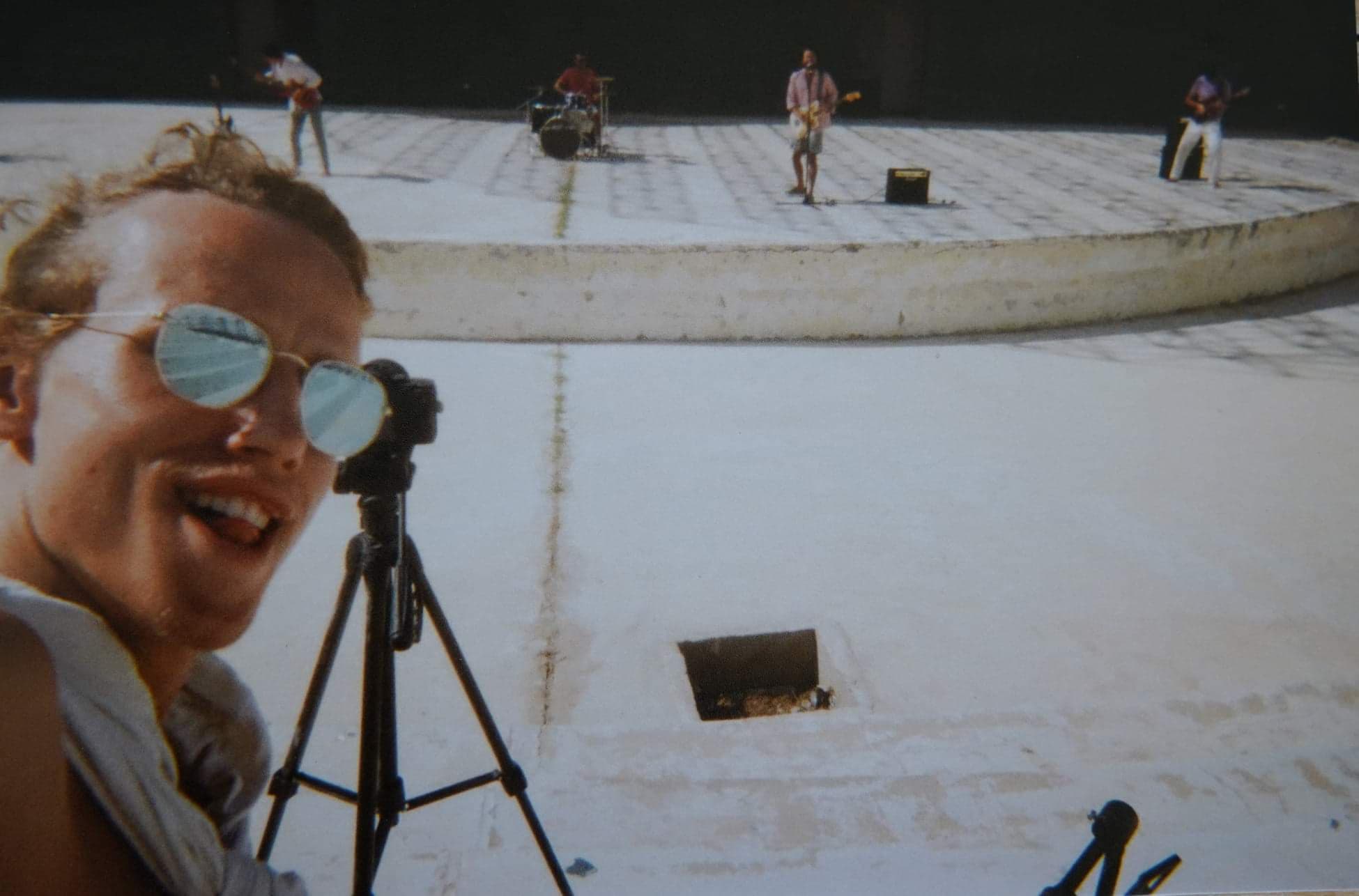 Do you have any other upcoming releases we can look forward to?
Well, we have a very exciting few months ahead, and an even more exciting year planned for 2021. Besides the release of our live performance of Harmonix, and our quarantine jam video “Wa2t Faragh”, we have been quietly preparing for the next coming months. The band will be moving to Egypt for a few months starting October, with plans to finish recordings that have been happening throughout the year for a follow up to our debut EP set to release early next year. We’ll be sharing more details of that project soon.

This article is part of our ongoing initiative, Spotlight Sundays where we hope to celebrate different Egyptians from the community.

If you’d like to be featured or have any other enquiries, please email us at: [email protected]