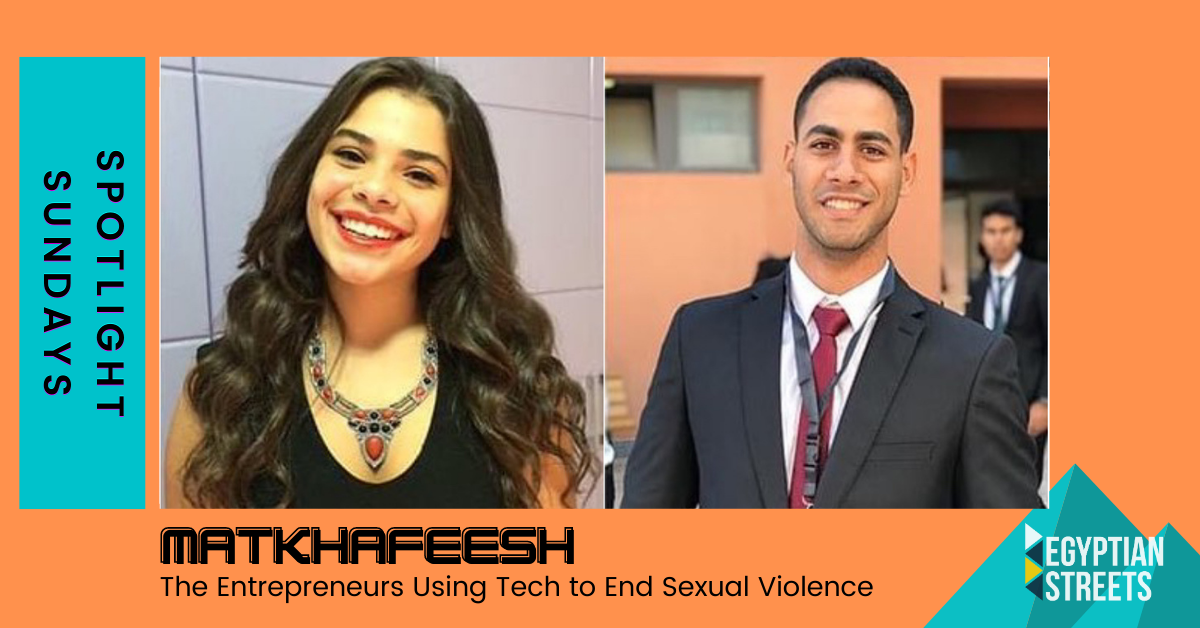 The first thing that comes to mind when thinking about STEM (science, technology, engineering and mathematics) is how unwelcoming and inhospitable those fields have historically been to women. From a lack of representation to a well documented gender pay gap, all the way to exclusionary, poorly designed and downright offensive tech products, women haven’t always had a fair shake in STEM.

In recent years, however, women from all walks of life have been wielding the power of tech to raise awareness about gender-based discrimination and violence. In Egypt, a social movement to end sexual violence against women has swept the country’s digital sphere, stirring important conversations and discussions about gender equality and sending shock waves across Egyptian society.

Using tech to put sexual abusers on notice are Salma Medhat Shaaban and Ahmed Hisham Rihan, the computer science graduates behind anti-sexual harassment app Matkhafeesh. “We have been working on it for over six months. We founded it when we saw that women and girls were starting to speak up on social media and [taking steps] to raise awareness within their own circles. We really believe in the cause and we wanted to support them with what we learned and what we believed could [make a big difference], which is technology,” Shaaban tells Egyptian Streets.

Despite not having been fully launched—with only the Android version available and the iOS edition slated for release soon, Matkhafeesh is already generating a great deal of interest on Egypt’s social entrepreneurship scene, reaching the semifinals at Entreprenelle’s Gender-Based Violence competition, which took pace earlier this year.

What sets Matkhafeesh apart is its four-pronged approach to helping survivors of sexual violence, providing realtime assistance and solutions designed to prevent incidents altogether, as opposed to just attempting to cure its potentially life-changing effects on victims. Using geolocation technology, the app’s Circle of Trust feature allows users to create a list of trusted emergency contacts to alert in cases of present or impending danger.

“You can add up to four people you trust […] If you feel like you are in danger, there is a shortcut you can use—pressing the power and volume buttons simultaneously. They will receive a message informing them that you are in danger and a tracking link to your location in case it changes. So that is something that could help prevent the problem before it happens, as a form of social support,” Shaaban explains.

This promptness also extends to other aspects of assisting victims of sexual harassment. The app offers survivors and victims prompt legal assistance, allowing them instant access to legal representation and counsel.

“We have lawyers who specialize in sexual harassment and sextortion cases, and they have years’ worth of experience, so that is their area of expertise. [Users] can consult with [lawyers] online or offline—they can ask them to file lawsuits on their behalf and they can, during [or soon after] the incident, call them if they wish to take the harasser to a police station to file a sexual harassment report,” she says.

Along with expert legal advice, victims and survivors also have access to mental health resources. Accessible mental health services are the greatest recovery tools available to survivors of sexual harassment and abuse, allowing them to reclaim their former selves and overcome the trauma of sexual assault.

“We offer a variety of mental health resources … The mental health professionals and NGOs we work with specialize in treating survivors of sexual violence. They offer services like group therapy, support groups, one-on-one therapy, or even less intense [options] like awareness and support workshops or discussion groups and such,” Shaaban elaborates.

The entrepreneurs have placed great emphasis on the mental health component of the app due to the many singularities and complexities that can arise when dealing with cases of sexual violence. “We were advised by professionals that some sexual assault survivors do better in group therapy because they feel that they are not alone and they meet other [survivors] who have experienced the same struggle. Others do better in one-on-one therapy because they are too traumatized so they are not comfortable talking before a group,” she says.

Another reason Matkhafeesh prioritizes mental health services, which are a crucial element of recovery for survivors, is the dearth of qualified practitioners in Egypt. When seeking trauma counseling, some survivors have reported being gaslit and even sexually abused by therapists they had seen before working with Matkhafeesh.

“Not anyone is qualified to treat survivors. We have been told stories by [women]—they have gone to therapists who sexually harassed them or they went to therapists who asked them triggering questions, like ‘what were you wearing?’ or [said things like] ‘maybe you misunderstood’ or ‘maybe nothing happened’,” Shaaban remarks.

But perhaps the most impactful feature is the app’s Harassment Map, which allows women to report incidents of sexual harassment anonymously and log the geolocations of where they took place. This not only encourages more and more women and girls to speak up, it also makes this user-generated data available for all civil society actors and other parties in need of reliable sexual harassment statistics from Egypt.

“We are trying to take the burden of fighting sexual harassment off of women, we want to place it on organizations […] There are NGOs that provide anti-harassment services, like awareness and protection programs. These organizations will be able to provide these services in a more practical way when they have enough statistics, since you can’t find sexual harassment statistics online, the last thing we have is from 2013, so the data is pretty scarce,” she notes.

Most importantly, however, Matkhafeesh is designed and tailored for women by women. In addition to Salma, who co-founded the app, women and survivors of sexual abuse were involved in every stage of the platform’s development.

“In order to develop the features of Matkhafeesh, we didn’t want to assume anything about the problem or about what [women] needed, so we interviewed over 300 women […] The objective was to understand the issue and to have enough information about how they need to be supported,” she explains. “Based on user interviews, we developed a prototype, then we met with the [women[ again and started taking their feedback. We did this seven times.”

But beyond developing a tech product for women, the issue of women’s representation in STEM fields is crucial for the feminist movement today. “Everything Ahmed and I did, we did together, except for [the initial user interviews] […] I was the one who did those so the [women] would feel comfortable talking to me—someone like them, someone who experiences the same issues and someone who can really sympathize with their problem because they understand it,” she details. “Even though I am a woman and a co-founder, I didn’t want to assume anything about their struggle, I wanted to hear about it from them.”

Matkhafeesh is a great example of what can be achieved when women are not only included, but centered, both, in life and STEM. This brand of feminist tech can take the fight for gender equality leaps and bounds into the future.

“Data is so powerful. I would encourage the girls who don’t need the features pertaining to mental health support and legal assistance or don’t even need the social help to at least log the sexual harassment incidents in the map because [something as little as a] look or a word [could constitute] sexual harassment. It would really help and [is a great way] to contribute to the cause,” Shaaban concludes.