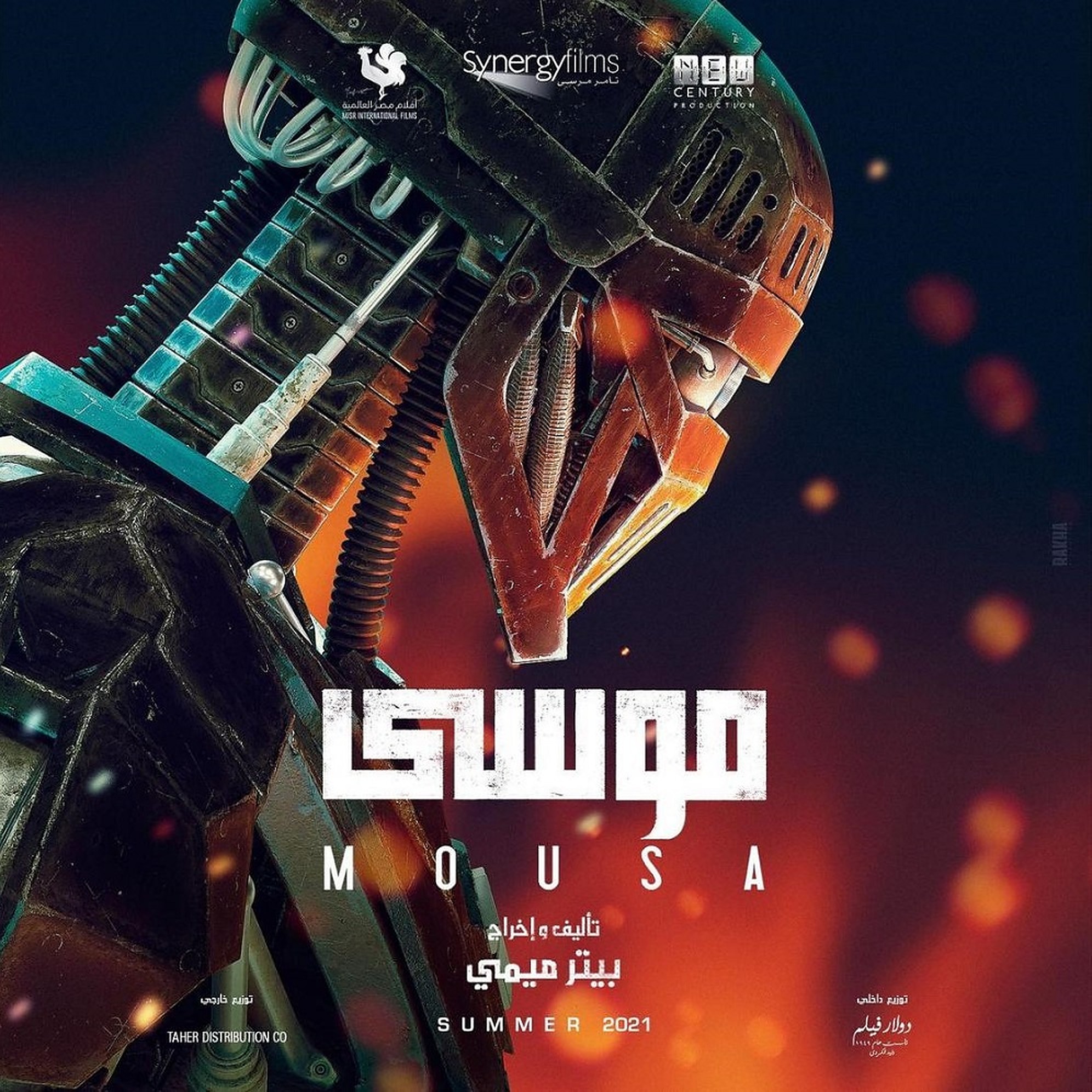 ‘Mousa’ might seem like a typical superhero movie at first. But it represents a new chapter in Egyptian cinema that leans more into creative storytelling and science fiction, allowing audiences in the region to become more prepared for what might come to exist in an Artificial Intelligence (AI) and tech-driven future.

Directed and written by Peter Mimi, who is also known for other recent successes including Kalabsh, Casablanca, and Harb Karmouz, the film features renowned stars Karim Mahmoud Abdel Aziz, Eyad Nassar, and Asmaa Aboulyazid. It was released in August 2021, and is co-produced by Synergy Films (Tamer Morsi), New Century Productions, and Misr International Films.

As the first Arab AI and robotics movie in the Arab world, the film took two years in the writing and preparation phase from October 2019, and also holds the record for the highest-budget sci-fi film in Egypt, which marks a huge shift in Egyptian cinema. The film’s release also comes at a pivotal time where many countries in the Middle East are also taking bold steps to increase investment in emerging technologies, such as the Emirates with its UAE Artificial Intelligence Strategy 2031 and the new national platform in Egypt for artificial intelligence.

Pushing the limits of taste, ‘Mousa’ challenges audiences to connect with different kinds of characters and see if they would care about ​​odd and complex personalities that are usually not common in society, such as Yehia played by Karim Mahmoud Abdel Aziz. The character is an engineering college student who invents the first robot in the Middle East (Mousa) in an attempt to achieve justice and take revenge against the evil, corrupt, and those responsible for the tragedies happening in the world.

The paradox is that the robot (Mousa) is the only figure in Yehia’s life that carries humane values, as he is used by Yehia to fight against the inhuman injustices carried out by humans themselves.

The plot of the film may be difficult, at first, to discern due to the film’s fast cutting editing technique, which shows several consecutive shots at different periods. However, it gradually builds up as the dialogue between the protagonists in the beginning of the film have profound impact on what happens to them later on.

Karim Mahmoud Abdel Aziz gave a stellar performance in depicting Yehia’s cleverness yet soft and vulnerable character. His strange posture, pale face and unnatural way of communication, which can also explained by the traumatic aftermath of his father’s death, provides representation for the new kinds of personalities that are among a younger, disenchanted generation, shaped by a unique period of history that is witnessing rapid yet disastrous societal and technological transformations. As Reika, who plays Yehia’s close friend, once expressed in the film that “the world has become too tragic for it to exist, and it deserves to end.”

As we enter an era in which it is becoming easier for governments, corporations, and organizations to monitor activity through our mobile phones and laptops, Mousa reverses that trend. It reimagines what could happen if humans had the ability to use technology for an opposite type of surveillance mechanism: to monitor the corruption in governments and terrorist groups that perform any injustices in our world. Instead of having technologies or robots control us, what could happen if we also used technology to serve the purposes of the common good?

In other words, how can technology allow humans to be more ‘human’?

Yuval Noah Harari, historian and bestselling author of Sapiens, once said during a dialogue event that “science fiction is the most important genre today, because it prepares people for dealing with the new challenges of the 21st century like AI. But it usually focuses on the wrong scenarios, like the scenario of the AI gaining consciousness and the robots coming to kill us. I’m far more concerned about the robots coming to feed us, and to sell us stuff, and that they know how to manipulate us by pressing our emotional buttons.”

The problem, he added, is that for the first time, we are dealing with technologies “that can understand our purposes better than we do, and can therefore manipulate it, without us even realizing it.” In the coming future, people have to be more curious of what is happening inside their minds, because there will be many factors, influences and emotional buttons being pressed in order to convince us to make a certain decision, even if it is as simple as buying a new product.

Mousa presents a robot that is not trying to manipulate the human mind, but is guided by Yehia’s own mind. Instead of imagining a future where our minds are constantly monitored and controlled by external forces, the film sheds light on the power and importance of developing and protecting the human brain in order to allow it to use technology to serve the interests of humanity.

Security robots: can they threaten us or make our lives safer?

Eyad Nassar played an honest and humane performance of an individual working in a security institution, revealing his tendency to be impulsive or overreact, or make faulty decisions at work due to the impact of his own personal life. This humane and imperfect image of an investigator contrasts with the image of the robot, who is now at a much more advanced level and can perform the job more efficiently.

A new kind of social contract is explored in the film, where the ‘human agent’ of the police is no longer seen by the younger generations as the main security provider for citizens, as it starts to compete with a new technological power that can fight injustices and evil much more efficiently. The film encourages the audience to wonder: what is going to happen to these traditional, human-powered security institutions in the future? Will they cease to exist or will they be integrated with even more powerful features through technology and artificial intelligence?

The fictional figure of a superhero, such as Superhero or Batman, no longer appears to be too unrealistic to exist, as the film poses the possibility that technology can develop these kinds of ‘superhuman’ figures in our future, and that they might actually threaten the authority of human-powered institutions depending on who holds the power to control them.

In our time, these kinds of questions are important to ask to allow younger generations to be prepared and not feel too overwhelmed by the possible scenarios and challenges that can exist. It also helps audiences to understand the importance of the ability to gain control over one’s own brain before any other external force controls it, and that in the coming years, it is vital to be more curious and skeptical of how we make decisions, and what are the emotional and psychological buttons being pressed that are pushing us to make these decisions.

5 Thought-Provoking Arabic Books by Egyptian Authors
How Did Ruby Steal the Hearts of Millions of Egyptians?

How Did Ruby Steal the Hearts of Millions of Egyptians?
5 Thought-Provoking Arabic Books by Egyptian Authors