Egypt’s Propaganda Posters: A Vintage Time Capsule of Past Politics 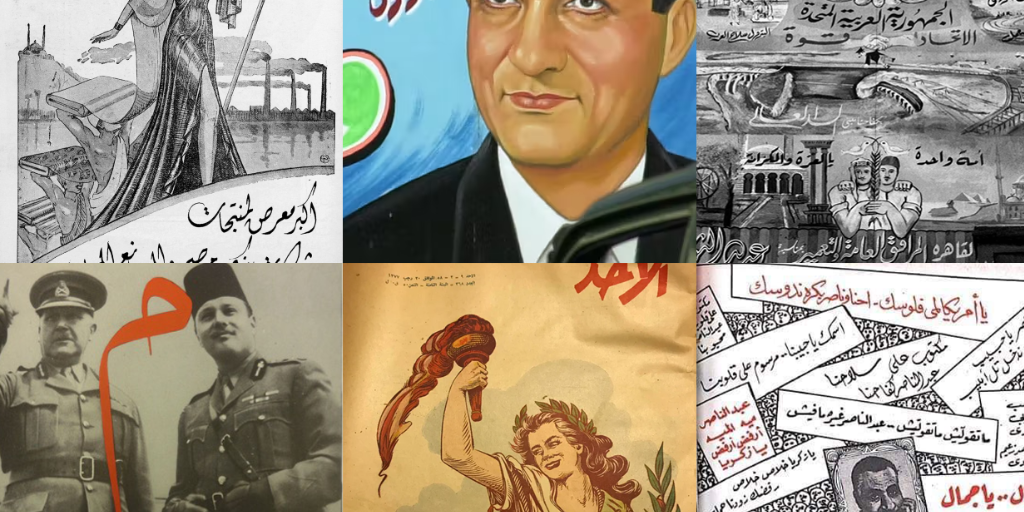 Propaganda posters were once one of the primary modes of information dissemination during the twentieth century. Looking back at them now gives you a time capsule into the way countries were ruled in each era.

Egypt’s history, inundated with historical shifts over the course of a century, can be reviewed through its propaganda posters. Once symbols of the country’s shifting ideologies, they now serve as time capsules of what has passed.

The Post-Colonial Era: Nationalism on the Rise

Egypt’s period following its independence from Great Britain provided a formative time for the country’s nationalism to grow. Public companies and governmental institutions would often depict pride and strength when developing their national industries. The country’s growing nationalist sentiments would go on to reshape its long-standing monarchical politics.

War makes for unusual allies. Egypt and its former occupiers, Britain, had joined forces during the Second World War to fight the Axis powers of Nazi Germany, Italy, and Japan. This propaganda, in development with the British Ministry of Information, intended to rally Egyptians for the war as a now-independent state – though British influence in Egypt continued to exist even after independence.

The United Arab Republic: A New Era of Egypt

With Egypt’s monarchy overthrown in 1952, the country’s nationalism materialized into a republic with pan-Arab sentiments. Spearheading the pan-Arab ideology was Egypt’s president Gamal Abdel Nasser, who would later form the United Arab Republic with Syria in hopes that other Arab neighbors would join.

Egypt’s sixties are often heralded as its industrial revolution. With all industries now nationalized under the administration of Nasser, Egypt’s propaganda of that time prioritized showcasing the modernizing achievements of its economy and its lands.

Nationalist fervor plummeted in morale following Egypt’s defeat to Israel. The defeat, which also affected Iraq, Syria, and Jordan, drew major geopolitical consequences for Egypt and the Arab World as a whole. It would lead to Israel’s capture of Sinai, a loss that would lead to later wars between the two once more, culminating in the 1973 October War.

Following decades of Egyptian-Israeli conflict and Sinai’s return to Egypt, President Anwar Sadat, Nasser’s successor, sought peace and stability for the country. US president Jimmy Carter served as the third-party mediator in the peace talks between the two countries. What would later become the Camp David Accords would usher in an era of peace and stability for Egypt.

Following the shocking assassination of Anwar Sadat in 1981, Vice-President Hosni Mubarak would assume Presidential control – for the next 30 years. Mubarak’s rule would be uncontested during his re-elections, which were conducted through parliamentarian referendums.

But in 2005, Mubarak’s Egypt held a multiple-candidate election for the first time. Mubarak was re-elected once more following an 88 percent voting victory.

Six years later Mubarak would meet the end of his presidency after Egyptians took to Tahrir Square to protest against his thirty-year rule – eventually becoming the 2011 Revolution.