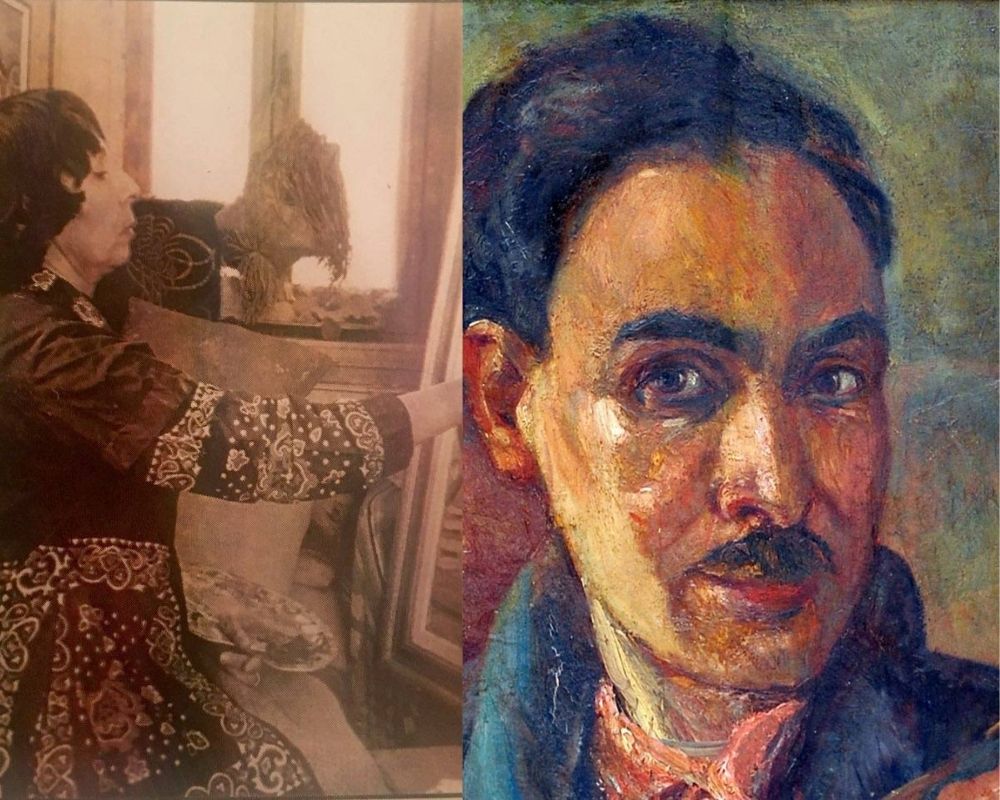 A painting tells stories through soft brushstrokes, a painter dreams in watercolors, and a masterpiece is made to captivate. This is the story of Egypt’s artistic siblings, Effat and Mohamed Naghi; a duo who loved art and their country simultaneously, and devoted themselves to creating masterpieces that defined modern Egyptian art.

The Alexandrian siblings hailed from aristocratic circles: Mohamed, born in 1888, was 17 years Effat’s senior. Although their artistic careers started at different points in their lives, both siblings had a fervor to create from a young age.

Mohamed studied music and painting at an early age, but didn’t pursue his love for the arts until he became the first Egyptian to study at the Academy of Fine Arts in Florence from 1910 until 1914. The nature of Mohamed’s career and studies led him to travel the world, which highly influenced his work later in life. Studying European art-making up-close, he was also fortunate enough to have learnt and studied with the world-renowned painter Claude Monet.

By the late 1920s, Mohamed was a painter, lawyer, and a diplomat, and teenage Effat recognized her love for painting. She would often diligently copy Mohamed’s paintings, as a way of practicing her skills, and trying to impress her older brother. The latter, in return, was keen on furthering her skills, and hired an artist to teach her painting at home.

In 1945, Effat married Saad al-Khadem, a researcher, writer, and painter like herself. She began her formal education two years later, and from 1947 until 1949, she studied sculpture, fresco painting, and decorative arts at Rome’s Accademia Di Belle Arti.

Effat’s work was inspired by ancient Egyptian and folk artifacts, as well as Egyptian visual heritage. She integrated a variety of materials into her pieces, such as crocodile skins, antique painted wood, and amulets. Her work is known for its distinct color combinations and dense textures.

Mohamed longed and agitated for the revival of Egyptian folklore heritage in the 1920s, and so did Effat’s colorful and densely textured pieces which depicted a primitivist aesthetic rooted in 1920s Egypt.

Both siblings were inherently focused on creating paintings that served a purpose, while Mohamed’s pieces served political and cultural ends that helped spread awareness and disseminate knowledge, Effat’s works were critical in nature.

In 1964, the Ministry of Culture commissioned Effat and other artists to reflect on the progress of the Aswan High Dam construction. While some artists addressed important issues such as the hazardous labor and the resettlement of Egyptian and Nubian peasants, Effat focused on the structural aspect of the project. She produced one of her most famous works The High Dam in 1996, where she focused on accentuating the inhumane aspect of the project and criticizing the destructive nature of the glorified industrial project.

Their paintings had different techniques, styles, and inspirations – Mohamed’s most ambitious work is shown in his oil paintings, but he also experimented with watercolor, ink, and pastel on paper.

In touch with the artistic and cultural revolutions of the 20th century, Mohamed opened the Alexandria Atelier for Artists and Writers in 1935, the Arts Club in 1941, the Artist’s Studio in Al-Qurana in Luxor in 1941, and the Cairo Atelier in 1952. During the 1960s, Effat freed herself from conventional painting, and leaned more towards contemporary pieces, such as collages and three-dimensional assemblages.

Effat was an incredibly unique artist during her time, finding a myriad of ways to depict the richness of Egyptian folklore through art.

Following her death in 1994, Effat’s house with her late-husband and workshop in Alexandria were demolished. The Ministry of Culture has commemorated the works of both siblings, transforming Effat and Saad al-Khadem’s house in the Zeytoun district in Cairo into an art museum dedicated to the couple’s memory. Similarly, after Mohamed passed away in 1956, his atelier was turned into a museum housing his masterpieces, and was inaugurated by the Minister of Culture at the time, Tharwat Okasha, in 1968.

Effat and Mohamed Naghi will always be remembered for their devotion and love for Egyptian art.By challenging old artistic styles and embracing new techniques,they remain an inspiration to generations of artists after them.