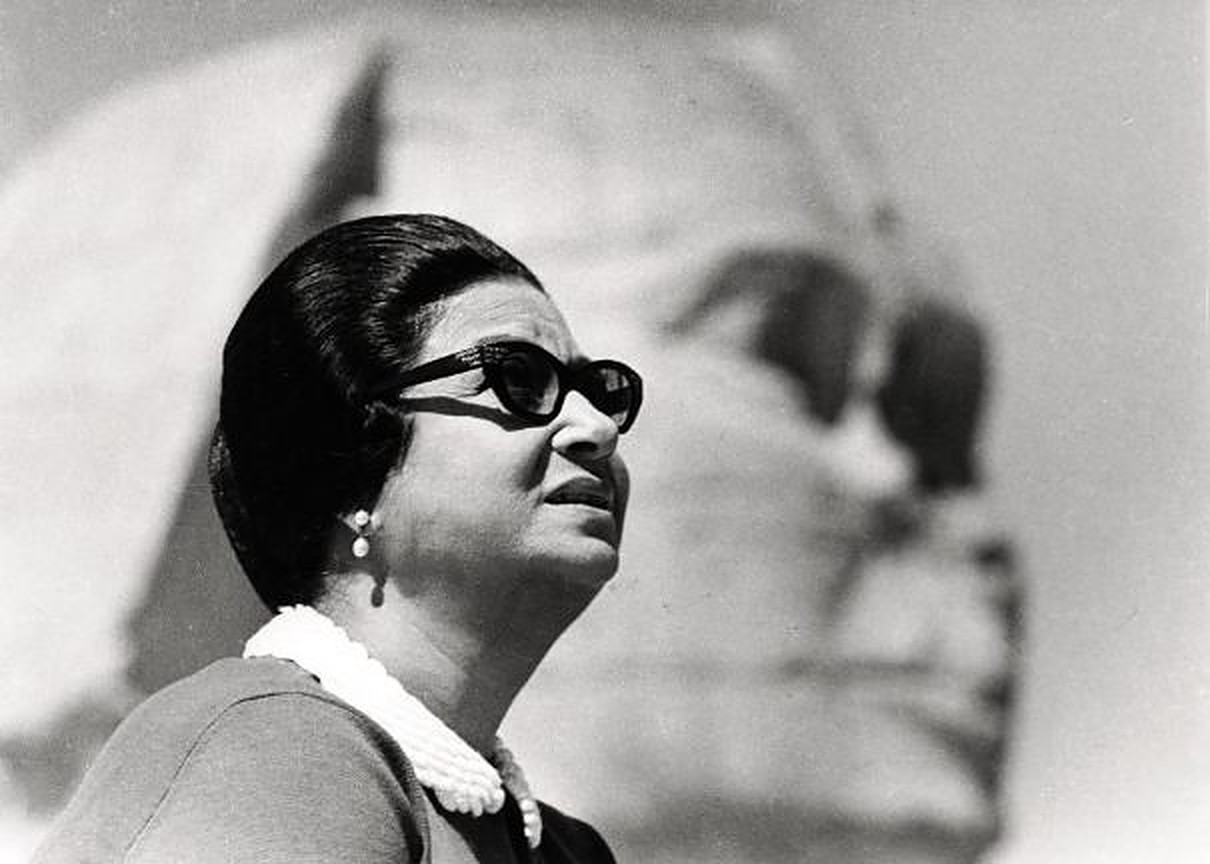 Standing in front of the Great Sphinx of Giza, Umm Kalthoum — wearing her iconic diamond studded, cat-eye black glasses — looks like a monument herself; an otherworldly alien far above the mundanity of daily life. Her unchallenged dominance and distinctive style gave off a sophistication that transcended all fashion  looks, and styles.

For years, the definition of ‘cool’ was Kate Moss, Tupac, Victoria Beckham — a socialized cool found at high school parties and fashion shows.

Bringing back the iconic look of Umm Kalthoum, Dutch-Moroccan-Egyptian model Imaan Hammam,one of fashion’s most popular models, is paying tribute to the iconic singer by launching her own capsule eyewear collection with Moroccan label Port Tanger.

Basing her designs on ‘two of the strongest women she knows’, Umm Kalthoum and her own mother, the collection boasts two silhouettes: ‘Umm,’ a cat-eye frame, and ‘M’Barka,’ a wide 70s-style frame.

In an Instagram post, Hammam noted that her life “has been a journey of finding my roots as a Moroccan-Egyptian. The older I’m getting the more I realise the importance of speaking out and sharing where I come from, and my people. I’m really proud of my heritage, so I try to put it into everything I do in my life and my career.”

“For me, doing this was also celebrating the fact that Arabs are doing so amazingly at this time, and I feel like there aren’t that many people that come together and unite and support each other,” she added.

There are several reasons as to why this matters.

First, in the modern fashion world, trends were never defined by influential Egyptian personalities like Umm Kalthoum, but by global fashion corporations, famous Western celebrities, and popular publications such as Vogue. Though there have been a handful of fashion looks and trends that came out of the global South, these were often appropriated and seldom credited.

Designer Daniel Mouktel, in an exhibition titled ‘Manipulation’ in Jerusalem in 2013, previously criticized the fashion world using his work “Fashion Force”, which takes headlines from actual Vogue covers and replaces the images of Western artists with artists like Umm Kalthoum. His work aims to pose the question: why is it so difficult to see Umm Kalthoum, a hugely popular singer in the Middle East, in a magazine like Vogue?

Second, championing local brands from low- and lower-middle-income countries is vital to constructing a global industry built on diversity. Many of the small local brands struggle to brand and market their collections to global audiences due to lack of exposure, access, and connections.

Celebrating the vibrant culture and lifestyle of local people, these brands help to create jobs and promote the values of tradition and craftsmanship, which are often neglected.

This is not the first time Hamaam celebrates her heritage. This summer, she visited Egypt to shoot for her latest campaign for Romanian-Jordanian shoe designer Amina Muaddi. The photographs were shot in Cairo, where Hamaam was seen posing in a number of everyday Cairene scenery and locations, wearing Egyptian-inspired dresses.

Serving as a reminder to cherish and value culture, Hamaam and Port Tanger’s new collection introduces new possibilities for the future of fashion; one that celebrates all trends and fashion looks from all corners of the world.