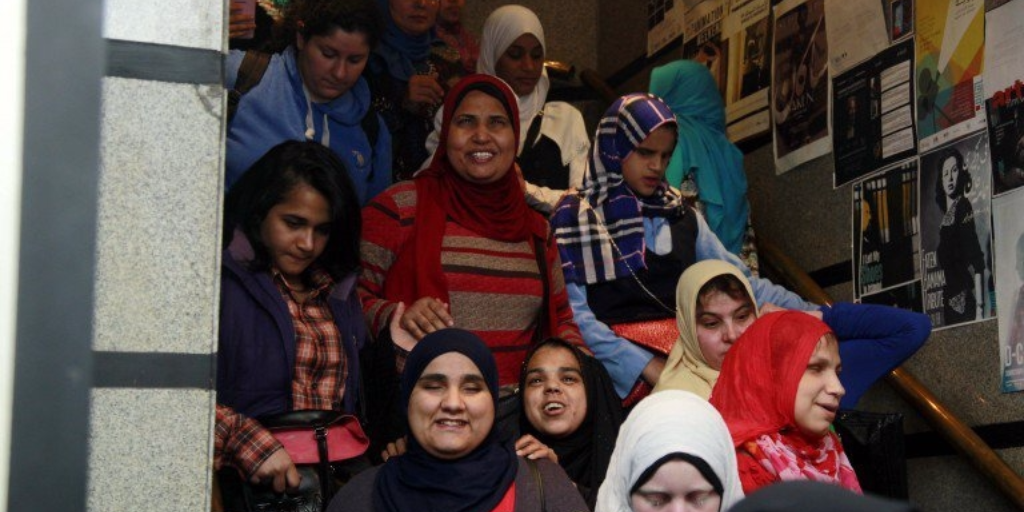 As a positive step towards integrating visually impaired children into larger society, the first animated film with live audio description will be screened at Zawya, in cooperation with the Commercial International Bank (CIB) and Masreya Media.

Listening to a detailed audio description allows children with visual impairments to imagine the costumes, outer appearance, body language and facial expressions of the characters. One hundred children from different governorates came to watch the film “Hotel Transylvania 2”.

“We chose to cooperate with Zawya because they are the most open-minded venue and is happy to adopt new initiatives,” said Aisha Selim, the director of Masreya Media, the leading dubbing, translation and subtitling studio in Cairo. “We discussed the idea with them and they were very enthusiastic about it. We first cooperated last June when we screened the classic historical film “Al-Naser Salah Eldin” with an audio description.”

About 20 people were involved in the different steps which included translating the script, reading the voice overs, obtaining certain permissions, and contacting schools. “There are about 32 schools for visually impaired children in Egypt. We contacted them and sent a bus to bring the children and their supervisors to the show because our main target is to reach people outside Cairo. Our next screenings will be in Alexandria and Minya,” she noted.This time, Masreya Media wanted to target children who have never been given the chance to watch an animated movie before. “We received permission to screen the movie for the first time in Egypt. Actually, it was a very challenging task because it is a comedy and we had to add some Egyptian humour to the audio description. We were also limited to the gaps where there is no dialogue so we had to decide which information is essential to include,” Selim added.

Selim believes that the role of the governmental organisations is incredibly important. “We usually cooperate with the Ministries of Education and Culture. I am very optimistic about this cooperation and we hope to use cultural centres in different governorates as screening venues in the near future,” she added.

Asmaa Samir Ibrahim, a radio anchor, was responsible for reading the live audio description while the movie was playing. “Last year, we made a five-minute audio experiment for the Lion King movie that was screened at the Children’s Cinema Festival. This time we wanted the show to be live and this needed a lot of rehearsal and preparation. The hardest part for me was to integrate into the movie and be part of it and not restrict my role to just reading some words. The most important thing for the writing team was not to deprive the listener from enjoying the music and sound effects of the movie,” she said.
“In Zawya, we have a programme that targets children in different schools entitled ‘learning through film’.  We send DVDs to schools with a number of questions that may be used to open up an effective discussion about the main issues the movie raises. Screening this film is a part of the project that also pays special attention to children with disabilities,” she said.Marianne Khouri, a director and producer as well as the founder of Misr International Films, the company behind Zawya, explained that watching films can be one of the most effective ways of learning.

Khouri also revealed Zawya’s intention to spread this experience all across Egypt. “We have about 3 million blind people in Egypt who need more attention. We need to broaden the experience; however, this requires a lot of preparation with schools and cinema venues in different governorates. We need support from the government who must play a more crucial role in this,” she noted.

Exhibition on Origin of the Alphabet in Sinai Kicks Off at Egyptian Museum
'We are so much less than we should be': Writer Mohamed Tawfik on Egypt, Literature and More

‘We are so much less than we should be’: Writer Mohamed Tawfik on Egypt, Literature and More
Exhibition on Origin of the Alphabet in Sinai Kicks Off at Egyptian Museum