“Have you ever thought about how vast this expanding universe is? Or looked at your life and pondered how much control you actually had? Well, I have, and I felt completely helpless at first,” says Omar Samra, Egyptian mountaineer and adventurer. “But then I realized that through embracing this uncertainty and lack of control lies the source of infinite power, the ability to overcome any adversity and the key to answer one of life’s most important questions – why are we here?”

Famous for being the first Egyptian and youngest Arab to summit Mount Everest and later on for achieving the Adventurer’s Grand Slam, many people saw Samra for the inspirational personality that he is, a man who preaches breaking boundaries and stretching horizons. However, little did many people know about the heartache the adventurer had to endure when his wife and soulmate passed away shortly after giving birth to their daughter Teela three years ago.

“It has been a long and difficult journey for me of trying to keep my head above water and making sense of the world around me,” Samra told Egyptian Streets. “A year ago I was interviewed by Brandon Stanton from Humans of New York and it was the first time to share my story with the world. Prior to that, only five people knew what had happened in detail.

“Being vulnerable in that way was difficult at best but I believed that sharing the story would help others in my shoes or simply anyone who has experienced or fears experiencing a loss of this kind.”

In a TEDxBend talk shared earlier this week on his Facebook page, Samra narrates all the odds that paved the way for him to be the mountaineer he is today. But what really tapped on many people’s emotions was retelling what it felt like to let go of Marwa and all the materialistic icons of their relationship.

“They say that even in darkness, there is light. And now I know this to be true. It emerges ever so slowly and grows even slower,” says Omar in his talk. “There are no accidents in life. Adversity is just an opportunity for us to grow. We have to learn to let go.

“This is what happens when we let things go; they turn into light and they go everywhere.” 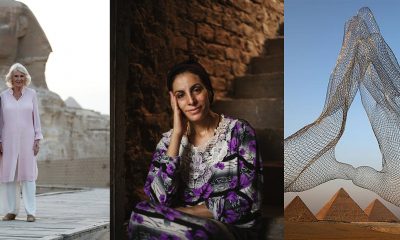