One-Way Ticket From Egypt To Mars 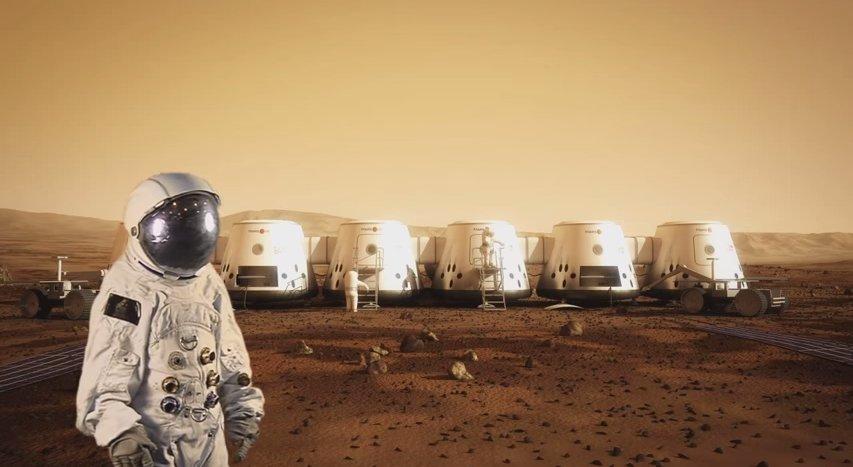 What would life be like on Mars? Why would someone decide to leave everything behind and colonize the Red Planet? Entrepreneur Bas Lansdorp was so curious that he has decided to launch the mission Mars One, which aims to send 24 people from around the globe (this one, for now) to establish a permanent human settlement on Earth’s neighbour. Among the 100 individuals competing for a seat is Mohammed Sallam, also known as “Mido”. He is the only Egyptian, and Arab, running to be involved in the project. We talked to Mido about his aspirations, fears, and asked what he would miss most about the planet he still calls home.

What prompted you to join Mars One?

Since I was a little kid I wanted to be an astronaut and explore the universe. I love mysteries and I love to search the unknown. When I saw the program I did not blink, really, especially since I live in a country that does not promote space as a valid career option. So, for me, Mars One was the golden buzzer.

What are you hoping to get out of the mission?

Science! I want to discover something great for humanity. I want to find solutions to help preserve the blue planet Earth and the human race in general. There are so many unanswered questions and there’s a good chance we may find those answers on Mars.

Who is your inspiration?

My personal inspiration would be the Pharaohs, hands down. They used to study the sky all the time and relate all their buildings and temples and monuments to the stars. They were also the first people to discover Mars and give it an identity, as they used to call it Red Horus. Being a part of this mission is a way for me to follow in my ancestors’ footsteps. As for astronauts, my inspiration is Yuri Gagarin, who is such a brave human being.

How have you prepared yourself for your application?

I found the application online in 2013 by coincidence, and it didn’t take me long to actually fill in the application and submit it. I’m talking hours. And I didn’t tell anyone that I had applied because I never thought I’d make it anyway. Why would they pick the Muslim Egyptian who is neither a space engineer nor a scientist? More than 200,000 people applied, and they chose only 1,058 for the second round, 705 for interviews, and now there are 100 people vying for round three, and I’m still in the game as the only Arab in the program. I’m kind of in denial.

What scares you the most?

All 100 candidates are aware of the risks. We studied all of the risks two years ago and had an interview about the potentials, and it’s kind of a package deal. If you take those risks you will eventually end up living on an alien planet for the first time in the history of humanity. So, I’m willing to take the risks, but only if I’m well trained on all the scenarios, which will happen during the 10 years scheduled for preparations before actually going to Mars. But for the most part it’s the psychological effect that scares me. In space, if you lose your sanity you’re pretty much as good as dead. So we’ll need a lot of isolation training.

How are you mentally preparing yourself for the journey?

Can’t really say I’m preparing myself, now in 2017, since the trip itself will take place in 2031 and I’m not yet one of the 24 astronauts. If I’m chosen, we’ll receive intensive psychological training for years and years. It’s the toughest aspect of the mission; to find the team that is psychologically ready to leave everyone they know, everyone they’ve ever heard of and leave for good. It’s tough and it takes a very special individual to do that.

What will the living conditions be like? Can you describe for our readers the setting and everyday life?

The main tasks we will have to deal with are construction, maintenance, and research.

The Martian day, called “sol”, is very close in length to our regular 24 hour day. Its 24 hours, 39 minutes and 40 seconds in length, and most of the day will be spent inside the habitat where it’s safe for the astronauts. We will be sending data, doing experiments, communicating with earthlings and so forth. But the best part happens outside the habitat, which we call EVA, or Extravehicular Activity, which is basically anything that happens outside the camp while you’re in your space suit. It could be digging, it could be repairing, exploring or installing and so on. Our plan is to have eight hours of EVA per week. This way we’ll be able to minimize and monitor our space radiation exposure, because when the human body reaches a certain amount of radiation it means that this astronaut has hit their career limit and is no longer capable of going to space, or in other words get exposed to the space radiation, and will no longer be a member who can perform EVAs and therefore will become obsolete.

Would you have spare time on Mars? If so, how would you spend it?

Of course, there’s plenty of spare time inside the habitat. Usually, time will be spent in the gym, to keep your muscles in the right form since gravity on Mars is 62% less, which means you’ll be experiencing loss in bone density and muscle mass. Other than that, you could do whatever it is you want to do as long as you’re inside the camp. It could be reading, it could be watching movies or even emailing your loved ones back home. Real-time communication is not possible with current technology, since there will be a transmission delay between the two planets depending on their locations in their respective orbits and the distance between each which will give us a window of 3-22 minutes for the signal to reach the other side. This means a skype call won’t work, and a telephone call or facetime won’t either. But a video message is fine, and so is email. I myself am planning to take a couple of musical instruments with me, like my violin or a keyboard, aside from the fact that I love music and I graduated Conservatoire I was also the leader of an orchestra when I was 12. I want to listen to instruments on Mars because the outcome will be amazing. Mars’s atmospheric pressure is less than 1 percent of our pressure, so all sounds will be much lower in volume, and given that sound travels slightly slower on mars (240m/s compared to 340m/s on Earth) then all sounds should be lower in pitch, which sounds fun.

What were the strongest reactions you got from the people around you, both positive and negative?

Space to the people around me in the region, or even in Africa, is a dark place since we know very little about it, let alone talk about leaving and not coming back. I expected a big recoil from people and I’ve been called an infidel in some cases, but good or bad it doesn’t matter to me because I believe that everything that is brand new is often met with a wave of criticism. A lot of people support me, maybe not to go to Mars on a one-way trip, but because they want to see me pursue my childhood dream. One of the biggest TV hosts in our nation once told me that she’d met three veteran astronauts in the US and I just think like them and I speak like them with the mindset of a visionary, what an honor.

What criterion did they pick the applicants based on? What do you think your strongest asset was?

They were specifically looking for people who can adjust to different situations; people who can adapt with one another even though they all come from different backgrounds and cultures. They were also looking for people who can demonstrate the ability to absorb a big amount of information in a very short time period. As for me personally, I think my strongest assets was confidence. I did very well in my one-on-one interview because I was confident that nobody else loves space more than me, no matter what. They’re maybe Oxford students or MIT engineers, and I’m not, but at least I love space as much as they do, so we’re all level really. Even though I couldn’t answer one of the questions in my interview, my attitude got me the job. Also, I’m a big team player since I was a part of an orchestra for a while, as well as a basketball player for over 15 years, and they’re looking for that type for sure.

How do you plan on spending your time on the space shuttle until you reach Mars?

I love this question, but I don’t know if you’ll love the answer. I’m not left with many choices so I’ll be reading, reading, reading and reading, all the way until the point where I’ll have to start writing my own book. This will be while hoping and praying to start a new fresh civilization upon arrival so that people in the future can read what I write.

How do you think this experience will influence you as a person?

It already has influenced me a lot. I hate reading, now I have to read. I hate studying, now I study every day. But there is one moment I’m waiting to experience during the trip. We’ll reach a certain point in time and space where you can no longer see the Earth as a planet and still cannot see Mars, your new home. You’re literally in the void. I’ll be listening to my favorite symphony, “Sheherezadeh” by Nikola Rimsky-Korsakov, and I’ll just be staring out of the window into deep space thinking that there’s so much space on the outside, and so little on the inside of “our spaceship”.

What will you miss about Earth?

The experience so far has certainly made me more positive and has caused me to appreciate the smaller things in life that we take for granted, like animals. If I were to go to Mars and not come back, there’s a good chance I will never see a cow or a horse or a fish again. If you think about it, it’ll hurt you. Dogs, birds, you name it. So my final answer is the animal kingdom.

This article first appeared on Because.bz

Modern Amazons: The Egyptian Village Run by Women
An Overview of the Most Controversial Fatwas in Egypt

‘Imagine if Every Girl in Egypt was Educated’: Meet Activist Jana Amin

An Overview of the Most Controversial Fatwas in Egypt
Modern Amazons: The Egyptian Village Run by Women