A Gulf Kid Embarks on a Series of Sinai Misadventures

This travel writing piece participated in the 2018 Travel Writing Competition which was done in collaboration with Travel Garage, Egypt‘s must-go to online store for purchasing adventure and travel goodies.

Some four, five years ago, at the ripe age of eighteen and as a gulf kid who had just recently moved to Egypt for university, I was laden with false preconceived notions and a naive, unarmed readiness for life that only an eighteen year old could muster. Understandable, as I had very little contact with the grind of the real world outside of my own homegrown bubble, I hadn’t yet been introduced to Kafkaesque literature nor had I been soaked in the world of adulthood where a wild night consisted of binge-watching that show I’d been putting off for a year now and then getting eight full hours of sleep. Alas, I digress.

So, brimming with excitement, I tagged along with four friends to the holy land of Sinai. I had heard only good things about Sinai and was ready to camp out in the desert underneath starry nights with only the most primitive of resources. Give me an adventure, said I, for I was ready for my Eat Pray Love inspired nirvana, I had packed my music and my books and I was ready for my literary block to cower away when words flocked and rushed and tumbled and mumbo jumboed their way out of my mind. 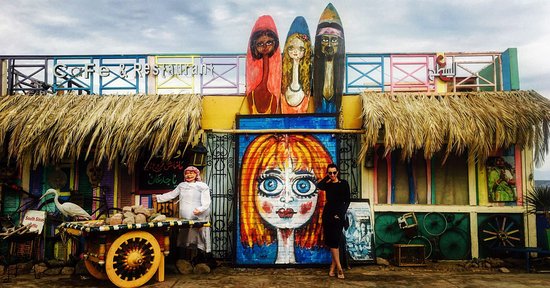 Dahab is reputed for its relaxed ambiance. This photo of well-known Everyday Cafe & Restaurant is courtesy of TripAdvisor.

When we first arrived in Dahab, I was told that we would need to find a car that would drop us off where we would then continue on foot using the help of two camels that would be carrying our bags since the road was not equipped for cars, and we’d ultimately reach our camp in Abo Galloum. Simple enough, I thought. I had managed to maintain an ongoing flow of a mix of happiness hormones that kept me going, completely ignoring the tiny alarm that goes off whenever I’m out of my own element.

What happened over the course of the following days was a myriad of things I would not particularly wish for my mother to find out about for fear it would cause her unnecessary distress, of which I’ll recount a few incidents. It started with the fact that the road that was not equipped for cars was actually not equipped for human beings as well. The journey took about 2 hours, slowed down by the fact that night had fallen and we had someone with us who naturally tripped on her own feet and on perfectly even ground (me, this person was me). However, with the aid of flashlights, we were able to maneuver our way through zig-zagy boulders and uneven ground, not without many scratches on our knees and elbows that served as a rite of passage of sorts.

While making our way to our camp, in the womb of Mother Nature, Mother Nature, well, called. And boy did she call, quite persistently, I might add. With no restrooms in near sight, I whispered to a friend that I was in quite a pickle and that I had to tinkle, use the powder room, respond to Mother Nature’s call, whatever you want to call it.

A wicked smile drew on said friend’s face while delivering the news that there were no toilets around and that we still had about an hour to go, but that I did have one option, and then proceeded to very slowly point to a small bush on a higher point in the mountain adjacent to us. I shall now refrain from giving any further details on this matter.

Having already decided that, since it was November, I wouldn’t be swimming, I had completely discarded the notion of having a bathing suit just in case and had instead packed only comfortable clothes and a baggy galabeyya, which I happened to be wearing when a good friend asked me excitedly, go pro in hand, to go snorkeling with him. Now, I’m not one to go around obsessing over haute couture, but I was not exactly dressed appropriately for the occasion. Not surprisingly for an impulsive person such as myself, after various protests, I gave in to my friend’s reasoning which was: well, why not? What’s the worst thing that could happen?

I had never seen coral reefs in my life and despite looking like an absolute fool with my galabeyya and goggles (all captured on the go pro, although all evidence was later destroyed), the moment I caught a glimpse of them and the sea creatures, I quickly gasped my way back to the surface because the utter beauty of it all made my tear ducts work in an overdrive. Fish of different sizes and colors and shapes were swimming in groups everywhere, and I watched, dumbstruck, trying to make myself as small as possible so as to not interrupt the flow of life they had there. It was overwhelming, and my galabeyya actually facilitated the whole experience.

The day prior to our return back home, the idea that I’d never gone for a proper hike struck me and I thought I’d venture and try it out now. So, at 6 in the morning, when everybody had gone to sleep, I made the arduous trip up the mountain, and every step made me feel closer to my self, my own body, and every parcel of my surroundings. Adjectives that could describe how I felt include exuberant, elated, exultant, and euphoric.

While I did not reach the summit, I did reach a point from which I satisfactorily stood, watching everything around me. The only question left to answer was how in the world was I going to get down? The most obvious answer was that I was going to take the same way downwards, but I was terrified of heights and, at that moment, I thought that I might as well camp out here and make myself comfortable since this was going to be my forever home. Adjectives that could be used to describe how I felt include: terror-stricken, petrified, and near-hysterical. Luckily enough, one of the camp owners happened to be passing by when she heard my theatrical outcry for help and talked me through the best and safest way to make my way back down.

Although I’ve since been to several other cities and countries, nothing will compare to that very first experience, nor the unparalleled feeling of witnessing a starry night. There will always be descriptions of the stars in literature, but there is nothing that quite does it due justice. I was and still remain down-to-my-knees overwhelmed and humbled by how both infinitesimal and larger than life every travel encounter makes me feel, and remain grateful to Sinai for the stillness it has allowed me to experience.

Hiking Sites You Should Explore This Winter
The Magic of Simon’s Crafts: Farming in Austria

The Magic of Simon’s Crafts: Farming in Austria
Hiking Sites You Should Explore This Winter