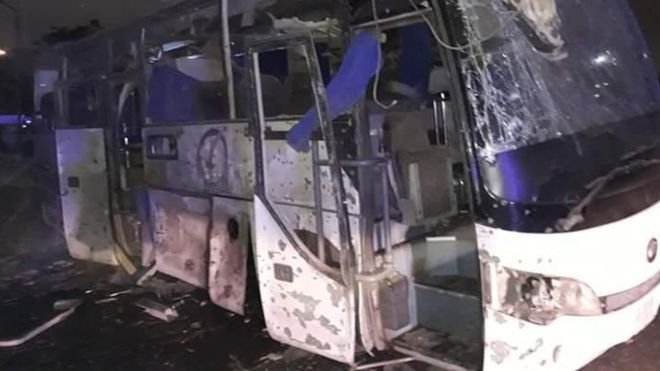 According to Egypt’s Interior of Ministry and photos circulating on social media, a roadside bomb hit a tourist bus near the Giza Pyramids on Friday, killing four and injuring a 11 others.

The tourist victims were of Vietnamese origin while some Egyptians were also injured namely the bus driver and the guide. Three Vietnamese tourists were killed in the blast and the Egyptian guide died later of his wounds.

The bomb, which went off at 6 PM, was concealed in a wall prior to its detonation.

Prime Minister Madbouly and Health Minister Hala Zayed are both currently at the Al Haram hospital, monitoring the health of  the victims of the incident.

Egypt’s Prosecutor General Nabil Sadek has ordered an urgent investigation into the explosion.

Egyptian authorities have been trying to increase safety measures and implement a strategy against terrorism for the current holidays and New Years celebrations. Both occasions are considered optimal for terrorist activities against large congregations of people.

Egypt’s tourism is considered a crucial segment of its economy. It has recently started to pick up again, following increased safety measures.

Condolences and messages against terrorism have been passing on regarding the incident, including from the European Union Delegation and the Embassy of Israel in Egypt.

I strongly deplore an attack on a bus carrying tourists in Giza that happened a while ago, resulted in death and casualties of innocent people. #EU stands hand in hand with #Egypt in the fight against terrorism. Our condolences to families of victims. Speed recovery to injured.

The latter tweeted its condolences to the families of the victims and that such attacks ‘would not affect the stability and security in Egypt.’

Is Egypt Safe? What You Should Know About the Giza Tour Bus Bombing
Eliminating Hepatitis: A Global Fight, Including in Egypt

Eliminating Hepatitis: A Global Fight, Including in Egypt
Is Egypt Safe? What You Should Know About the Giza Tour Bus Bombing