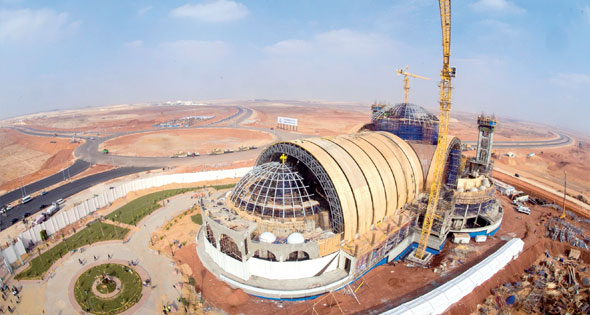 According to local media outlets, the New Administrative Capital’s cathedral will finally be inaugurated in time for Coptic Christmas mass on Sunday.

The opening of the cathedral, officially called the ‘Cathedral of the birth of Christ’ and set to be the largest church in the Middle East, will be attended by Egyptian President Abdel Fatah al-Sisi and Pope Tawadros II.

Both figures led the first mass celebration of Coptic Orthodox Christmas at the Cathedral, which can hold up to 8,200 worshippers, last year.

According to the Church instructions, registration would be required to the public to the attend the mass.

The Coptic Church, which brought Christianity to Egypt in the first century AD, celebrates Christmas on January 7 every year. It follows the old system that the Roman Catholic Church abandoned when it adopted the Gregorian calendar in 1582.

It is estimated that about 10 percent of Egypt’s population are Copts.

The new adminisrative capital was announced in March of 2015, and it is currently being constructed in the desert 45 kilometers east of Cairo.

It is part of the government’s plan to more evenly distribute its 95-million strong population across the country’s vast desert land, hoping to decrease traffic congestion, population density and ease the burden on the urban infrastructure.

It is set to include residential districts, solar plants, hospitals, an international airport as well as the nation’s upcoming largest mosque.

The latter, called the Al-Fattah Al-Alim mosque, will also be officially opened this month.