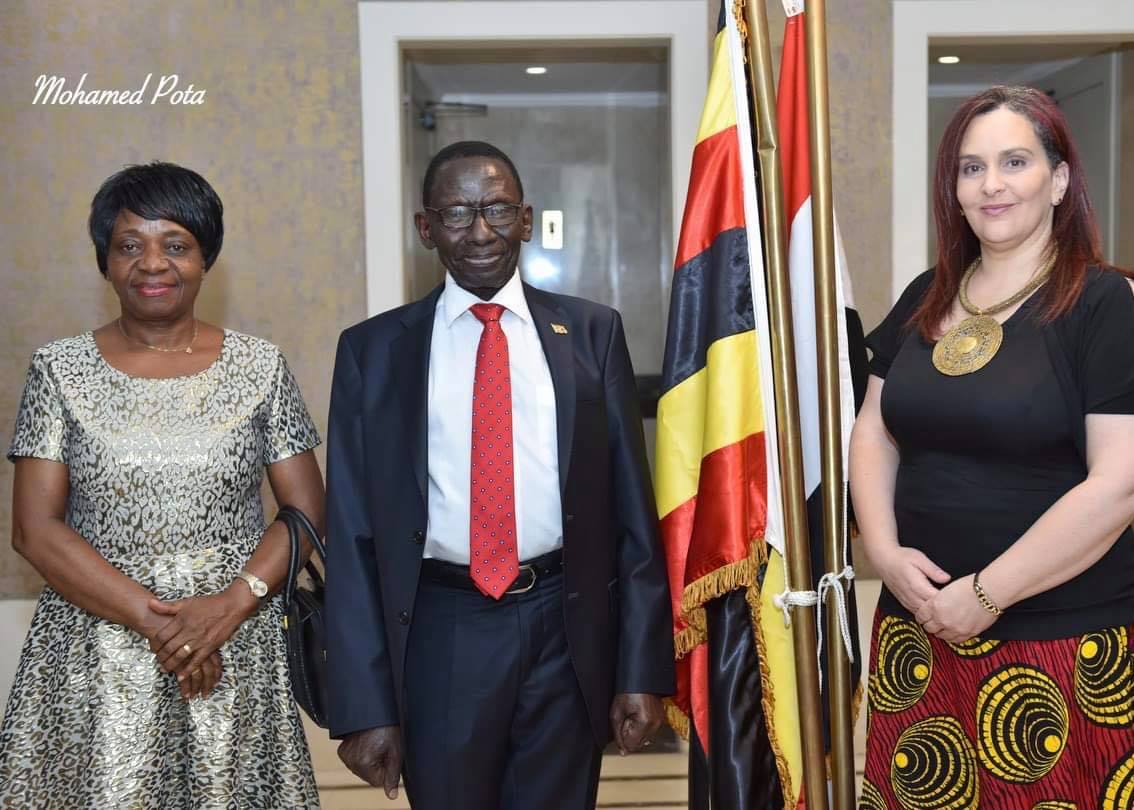 Egyptian businesswoman, Nancy Hadi was officially appointed by Uganda’s Ministry of Tourism to be their Goodwill Tourism Ambassador for Uganda in Egypt. This is the first time an Egyptian has been appointed as a Goodwill Ambassador by Uganda.

Uganda’s Ministry of Tourism’s decision to target the Egyptian market, to promote ‘Destination Uganda’ in Egypt and then to officially appoint an Egyptian to be their Goodwill Tourism Ambassador is a clear indication of Uganda’s strong interest in building on and strengthening ties with fellow Nile Basin country, Egypt. Hadi, sees this as an opportunity that will allow her to play a role in the strengthening of ties between her nation Egypt and Uganda and will give her the opportunity to serve and benefit her country as well as the continent of Africa.

The official appointment, which took place on September 18, 2019, came as a result of Hadi’s efforts to promote Ugandan tourism and culture in Egypt during the 2019 African Cup of Nations (AFCON 2019) event which Egypt successfully hosted.

Hadi, who was born and raised in the United States to Egyptian parents but spent most of her summers growing up in her homeland Egypt, was appointed as a Goodwill Tourism Ambassador by the Ugandan Minister of State for Tourism, Honorable Godfrey Kiwanda during the Ministry of Tourism’s 10th Annual Tourism Sector Review Conference, which took place at the Hotel African in Kampala.

Hadi’s efforts to promote Ugandan tourism in Egypt during the AFCON 2019 included, organizing a series of important meetings for the high-level government delegation, led by Hon. Kiwanda, several distinguished members of Uganda’s Parliament and UTB officials. Her company, International Business & Investment Services, IBIS, also successfully organized a spectacular evening celebration on board a Nile Cruise ship on the majestic Nile River in Cairo.

The prestigious and first of its kind event was called, ‘Ugandan Night on the Nile’, and showcased Ugandan culture through Ugandan food, coffee, music, videos. Also, in an effort to promote Aswan as the capital of African youth and culture, the event included paintings by Egyptian artists from Aswan, posters and pictures of Uganda’s mesmerizing sceneries of what Hadi believes is “an unmatched beauty.”

“I’ve always believed that Egypt and Uganda share a special bond,” says Hadi in a statement to Egyptian Streets.

“Other than the fact that they are both African countries, with very warm and hospitable people, Uganda is where the Nile begins, and Egypt is where it ends. This is especially important because for Egyptians, the Nile is our source of Life and Uganda is the Source of the Nile.”

Through her company, International Business and Investment Services (IBIS), and under the slogan of Uganda Tourism Board (UTB)’s campaign #VisitUganda, Hadi organized the event where attendees participated in Uganda-related activities.

“The fact that Uganda’s Ministry of Tourism viewed the AFCON 2019 as an important international sports event and decided to use this opportunity to introduce and to promote Ugandan tourism in Egypt while also celebrating their national football team, the Ugandan Crane’s, journey to AFCON 2019 and wonderful performance was very wise,” explains Hadi.

During the delegation’s official trip to Egypt, Hadi also helped organize a number of important meetings for the high level Ugandan delegation led by Hon Kiwanda, and included members of Parliament and members from UTB with the Chamber of Egyptian Tourism companies both in Cairo and Alexandria as well as a prominent pharmaceutical company to promote medical tourism between both countries.

A Benefit to Egypt As Well

Hadi believes that promoting tourism could also benefit Egypt and does not happen only through governmental efforts, but it also requires the support of the private sector.

“In fact, both Egypt and Uganda can mutually benefit from cooperating in promoting both destinations,” believes Hadi.

“For tourists visiting Uganda from the United States, Europe and most other destinations, they have to fly over Egypt, so it would be wonderful if our two nations could collaborate on developing joint tourism programs that would promote both destinations Egypt and Uganda and would give tourists the opportunity to visit both amazing destinations and this way they would have a richer Africa Experience since both tourism profiles complement each other. In other words, Egypt offers an experience unlike Uganda including the Pyramids, Red Sea and many other highlights and Uganda offers unique landmarks like the source of the Nile and experiences like Gorilla Tracking.”

Hadi was impressed by the kindness and generosity of her hosts in Uganda and was very appreciative of the Senior Member of Parliament from Aruu Constituency, Hon Odonga Otto, and his invitation to visit Uganda, which was clear testimony of Ugandan’s love for their country and dedication to promote its beauty and magic to the whole world. This trip was unlike any other trip Hadi had previously made.

“When people refer to Uganda as heaven on earth, you might think that they are exaggerating, but it really is,” says Hadi about Uganda.

“Uganda is not only blessed with breathtaking natural beauty; including like Egypt, some of the friendliest people in Africa, the most delicious fruits, and incredible wildlife, Uganda has it all.”

The incredible landmarks like the equator and the Source of the Nile are nothing short of amazing to Hadi, but what really impressed Hadi was the Ugandan people themselves. “They are very generous, kind, sweet, and loving. I did not feel away from home for a second,” Hadi adds.

During her visit to Uganda, Hadi attended a concert, ‘Tears of a Woman’, with many famous Ugandan musical performers including Catherine Kusasira, that was also attended by President Yoweri Museveni and many high-level government officials. She visited the Parliament, and even attended a session of the tourism committee which was also attended by the Minister of State for Trade, Hon. Michael Werikhe Kafabusa.

Hadi also met with several high-level government officials including the Minister of State for Youth and Children Affairs, Honorable Florence Kiyingi and introduced the international child abuse prevention program ‘My Body is My Body’ of which Hadi is the Director of Africa and the Middle East. This program teaches young children body safety, and provides them with the tools to detect danger, as well as instructions on who to inform in the case of abuse.

Hadi also met with Uganda’s Minister of State for Sports, Honorable Charles Bakabulindi and was also invited to attend a meeting of Hon. Bakabulindi’s Women’s empowerment group, Bakka Women’s Group. The Honorable Minister established this group to help the women, who are all representatives of various different unions in Uganda to learn different traditional crafts and also other economic empowering activities.

During her visit, Hadi had the opportunity to visit her host’s constituency in the northern part of Uganda including Gulu, Pader and other cities in Aruu County. She also visited a nursing academy in Honorable Kiwanda’s constituency, Mityana District called Kiryokya College of Health Sciences. There she met over 100 young men and women who are training to be nurses and midwifes. She was especially impressed by the academy’s director, Michael and the dedicated staff. “There is great potential for collaboration between Egyptian nursing schools and impressive Ugandan academies like Kiryokya,” asserts Hadi.

Hadi is currently helping Uganda’s Ministry of Tourism with organizing various tourism campaigns to promote Uganda in Egypt by showcasing the beauty of this magical country to Egyptians and to encourage them to visit the Source of the Nile and see for themselves.