Eminönü: Getting a Rare Glimpse into Old Istanbul

Michael Goodyear
Eminönü: Getting a Rare Glimpse into Old Istanbul

From the Bosphorus, Istanbul is a shimmering skyline of towering walls, grand palaces, and intricate minarets that still retains much of the allure of its famous culture and beauty. It is still as awe-inspiring now as it was for Russian envoys in the tenth century or Austrian ambassadors in the sixteenth. On the ground, however, it is a rapidly changing city.

The old Ottoman caravansaries, the hans, are almost all gone, replaced by new glass stores and hotels. The Divan Yolu, once the monument lined central street of the Byzantine and Ottoman Empires, is now a line of stores and restaurants.

Even the Hagia Sophia, once the greatest church on earth is now overrun by hordes of tourists and is replete with modern gift shops and cafes.

But one part of the old city has really maintained that feeling of old Turkey.

Between the ever more expensive and less unique Grand Bazaar and the Spice Bazaaar (also known as the Egyptian Bazaar, the Mısır Çarşısı) lies the inner heart of the neighborhood of Eminönü.

In this twisted knot of streets lay the true markets of old Istanbul, complete with everything from fishmongers to the last chest-maker in the old city.

Into the Streets of Eminönü

Eminönü begins at the mouth of the Golden Horn, where a veritable fleet of ferries is coming and going at all hours and balık ekmek, delicious fish sandwiches, are served by the thousands.

If you head south from the docks, the real character of Eminönü will start to appear. And if your eyes deceive you, just follow the smell of fresh lüfer, turbot, and dozens of other fish.

You will begin to see the specialty food stores that are a culinary figment of Turkey. Instead of the traditional western grocery store, although those have begun to penetrate Turkey, stores are broken up into individual specialties, like other countries in the region.

Walking through Eminönü, you will quickly come to understand the combinations.

First there are dried fruit, nuts, and spices in one set of stores. 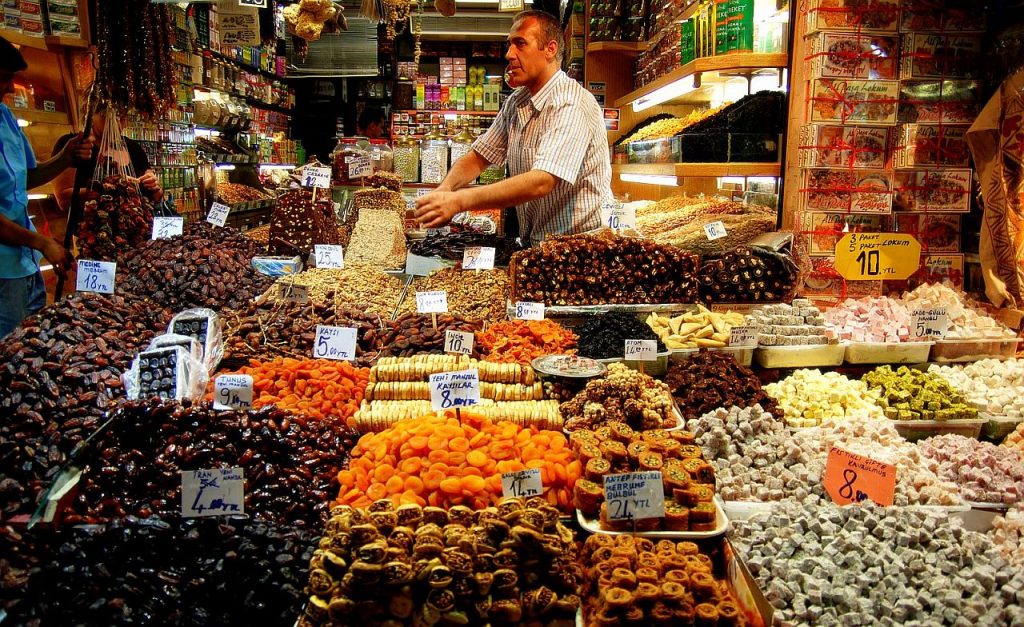 Next there is the trifecta of great Turkish food: olives, honey, and milk products, including a mountain of cheeses and the unique water buffalo clotted cream that is known as kaymak. Then there are the fishmongers, butchers, coffee roasters, and Turkish candy stores. The markets also have every single item you would ever want to find, from tea sets and coffee grinders to party favors and fifty different types of bags, from burlap to ornate paper.

The real treat, however, is actually tasting the food from the stalls in the web of streets behind the Spice Bazaar. The vast majority of these shops are in a long line starting from the first street to your west of the southern entrance to the Spice Bazaar.

The specialty stores have an abundance of flavorful and salty Turkish white cheese, beyaz peynir, and Anatolian olives. Just walking through the streets you will smell the mountains of spices, from red pepper to oregano.

Some of the best dishes in the city are also hidden in these narrow streets and side alleys. Turkish pizza, pide, is still baked to order in wood burning ovens. Some of the most flavorful döner in the city turns on spits in Eminönü. You can even try kokoreç, the surprisingly tasty sheep intestine sandwich that originated in Albania.

For dessert, there are baklava shops specializing in using heaps of fresh pistachios.

Perhaps the longest standing store in the neighborhood, Altan Şekerleme has been making homemade lokum, or Turkish delight, since the days of the Ottoman Empire. Unlike the packaged boxes with overpowering flavors that many think of when they hear the term “Turkish delight,” Altan Şekerleme’s colorful, powdered sugar or coconut-covered gems are sweet, flavorful, and have an ideal texture that might even make lokum your new favorite sweet.

In addition to touring the edible delights of Eminönü, it also boasts Ottoman-era mosques and old caravansaries, commonly known as hans. From the harbor, it would be nearly impossible to miss the Yeni Cami, or new mosque, one of the largest mosques in Istanbul.

Dating back to the seventeenth century, the massive complex next to the Spice Bazaar dominates the waterfront. But perhaps the more remarkable mosque in Eminönü is one that is frequently missed. Up on the second floor above the food stalls and markets is the Rustem Pasha Cami. The small mosque was built by the legendary Ottoman architect Mimar Sinan and is stunningly decorated with the blue Iznik tiles for which Turkey is famous.

Some have even described it as the most beautiful mosque in the city.

Unlike the mosques, hans are a dying building in Istanbul. These double story, square shaped buildings were where traveling merchants stayed during Ottoman times. The merchants kept their goods and animals down below on the first floor, while they stayed in the rooms upstairs. Today local tea dealers operate out of holes in the walls of these often deserted hans. You can stop by to enjoy a glass of Turkish tea while sitting in the courtyard of an old han.

The Büyük Valide Han is the last remaining part of the area around the Grand Bazaar where you can still climb to the roof and see old Istanbul from a remarkable vantage point, especially gorgeous at sunset, as the last rays of the sun shimmer across the Golden Horn and the call of the mosque begins to call the faithful to evening prayers.

A Hidden and Dying Gem

In the rapidly changing world of modern Istanbul, these treasures of Turkish culture are in a perilous position.

As developers begin to buy up areas around the Grand Bazaar and the economics of tourism further encroach into the heart of Eminönü, these places are in danger of being changed forever. Eminönü is a microcosm of Turkish history and culture over the centuries, and is a rich experience you will not soon forget.

Michael Goodyear is a J.D. Candidate at the University of Michigan Law School. He has an A.B. in History and Near Eastern Languages and Civilizations from the University of Chicago, where he studied Greek and Turkish history. He has been published in a variety of academic and general-interest publications, including Le Monde diplomatique, Subaltern States, and the Michigan Journal of International Law.