In the Wake of COVID-19, Egypt’s Asians Fall Victim to Racism

Sara Ahmed
In the Wake of COVID-19, Egypt’s Asians Fall Victim to Racism

A young woman stood on one side of the platform in the Attaba metro station, tucked in the heart of downtown Cairo, while talking to her friend who was standing on the other side. Radio messages warning Egyptians to take heed of the COVID-19 outbreak and suggesting tips to wash hands, played on loop, reverberating across the large metro halls.

“We were going up to the exit, and that’s when I saw him: a Chinese man.”

“May god protect us.”

For the last weeks, since the reality of the outbreak manifested itself within Egypt, home of the Middle East’s largest population, bouts and experiences of racism, whether online or offline, also reverberated through the country.

While the outbreak may have arisen in a market in the Chinese city of Wuhan, a common narrative qualifying the virus as a ‘Chinese’ one has acerbated tensions between Chinese people, individuals with “Asian” facial features and many communities worldwide. It is especially a critical issue for Egypt which many believe can be devoid of a racist reputation or narrative despite glaring evidence of the contrary.

Racism that touches the full range of the Asian community

Less than a month ago, photos and a video a Chinese individual left stranded, purposefully, on Cairo’s Ring Road highway as individuals avoided helping him, spread like wildfire on social media.

The perplexed Chinese national was sitting in the backseat of car, with an Egyptian driver holding tissues against his nose and mouth in clear aversion. Some individuals filming the video incited the driver to have the man removed from the car. As the Chinese national exited the vehicle in a spot which was highly difficult and dangerous to navigate on foot, he desperately tried to stop any other vehicle to take him. The attempts were filmed, with the audio backdrop being of the men’s taunting as they yelled for others to run away from ‘corona’.

Not too long after the incident, a group of unrelated Egyptians tracked the victim to apologize on behalf of Egyptians and present him with flowers. He was also visited by the Chinese Ambassador to Cairo, and, while local news outlets reported that there were ongoing efforts to arrest the Egyptians behind the taunting experience, the incident highlighted an important and significant impression many Egyptians could be under, which is that the virus is – erroneously – inherent to all Asian individuals.

This experience, however, did not prove to be singular as various individuals shared similarly harrowing stories with Egyptian Streets.

On a quiet Saturday, Henry Woo was walking through City Stars mall when a 20-something-year-old Egyptian, with friends, yelled ‘corona’ at him.

Despite the fact that Woo tried to confront them by saying the gesture was unkind, it was clear his explanation fell on dead ears. Some of the nearby staff, witnessing the incident, went up to him and acknowledged that he had done the right thing by confronting the group.

He also admits that even in high-income areas in Cairo, such as Maadi, Fifth Settlement and Heliopolis, he is on the receiving end of increasing looks – a stressful and hurtful reality.

Woo shares that, in the face of this trend which is sparked by “fear” and “ignorance”, there is a growing need for sympathy and consideration.

“Now is the time to give a friendly nod to an Asian stranger on the streets; smile at them when they are standing behind you in line and say hello to them in the elevator. Egyptians are friendly and hospitable people,” he admits.

Egypt is not alone in its plight of racism fuelled by fear, disbelief and anger at the outbreak. Indeed, the New York Times and the BBC reported increased hate crimes and racism in the US, Canada, across Europe and in the UK where Chinese and Asian individuals found themselves insulted, spit at, taunted and pelted in the streets.

Moreover, the racist rhetoric was also initially upheld by various politicians, such as US President Donald Trump, who labelled COVID-19 as the “China virus”.

With diverging information on the outbreak’s exact reasons, the only certain fact is that the global pandemic, which has left millions facing incertitude, employment loss, halted education and an abruptly fragmented social life, originated in China thus creating disdain which has resulted in hostility against thousands of Asians and Chinese across the world.

These realities, having manifested themselves in Egypt has well, have left a bitter taste for some members of the Asian community, namely those who have been living in the country for years. Some individuals with facial features of people from China or any Asian country with an inkling of similitude to Han Chinese appearance have been on the receiving end of this violent behaviour. Victims say that ‘looking Chinese or Asian’ has caused them to be abused or attacked.

One Korean national, Rae Lee, shared with Egyptian Streets that she was now having a difficult time venturing out into the streets, without her husband, due to the mistreatment she has been receiving.

“They [Egyptians] try to avoid me as I pass by. Some people close their mouths and make bad facial expressions,” shares Lee who lives in Alexandria.

Lee is facing her first racist experiences despite having lived in Egypt for ten years.

“I am in lock-down because of the racism, not due to [the] coronavirus,” she admits, revealing that another Asian friend was mistreated by staff at a hospital and that many of her community have opted to stay home rather than confront the blatant bullying in the streets.

The attacks and racist attitudes have also affected Asians from South East Asian countries, including Malaysians and Indonesians, many of whom are students.

Ahmad Solehin, a Malaysian medical student at Tanta University has noted racist behaviour from passersby and strangers even before the outbreak, but it became more prominent after its spread in Egypt.

“We have been students [living] in Egypt for so long that some of us have not returned [home] since the coronavirus outbreak happened, yet, when we ride taxis or the bus, people cover/close their mouths,” he shares.

“I rode a minivan once. The lady beside me and my friend just covered her mouth with [her] hijab as she saw me,” narrates Solehin who goes on to say “when the change (fakkah) reached us, we [gave] the others the money 2 EGP, but they [didn’t] take our money.”

“One time, I [was praying] at a mosque which I am not familiar with. I just [took off] my shoes and went straight to the first line. […] The man at the first line saw me and just went away to take his shoes,” Solehin claims the man had already been prepared to start his prayer.

The medical student, frustrated at racism he and many others were encountering for the first time in restaurants, gym facilities, hospitals and schools, highlighted that he would not be staying in the country after the end of his studies.

This conclusion, even if singular, is an ominous sign for Egypt, a home to over 17,000 Malaysian and over 7,000 Indonesian students.

A game of blame: Chinese cuisine

Prejudice against Asian communities, and misconceptions towards Chinese culture in general, have been a staple feature of Egyptian media and ‘humour’, with both the culture and its people often depicted in films through banter verging on racism.

In Mohamed El Henedi’s hit film ‘Foul El Seen el 3azeem’, the film caricaturizes many aspects of Chinese food, stressing the idea that the Chinese diet is one rich in insects or unsavoury dishes.

It would seem thus convenient, that in the height of this pandemic, memes and stills from the film have been circulating through social media as if to perpetuate that the outbreak was a strike of hubris due to Chinese cuisine.

This wave of banter popped up once more when local news outlets recently reported on a Chinese woman cooking a feast of animal genitals in the suburb of Cairo. Many social media users pointed out the diet of the Chinese – or rather, the acceptance of many delicacies – would initiate additional outbreaks.

Egyptian cuisine is rich in its own version of delicacies. From cow brain to fermented fish (feseekh) and stuffed intestines, one might question the validity of suggesting that the Chinese simply ‘eat like everyone one else’ as many would recommend.

Prior to the COVID-19 outbreak affecting thousands in the country, a Cairo restaurant, which has been a challenge to pinpoint, also raised rounds of controversy when it blatantly un-welcomed Chinese nationals in its establishment through a sign. 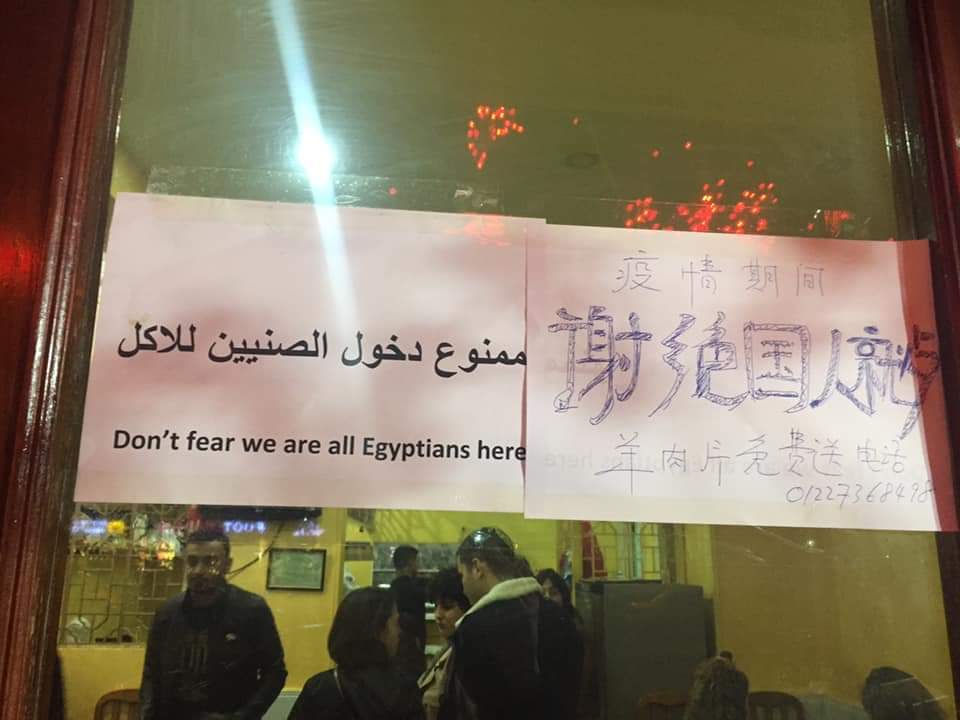 With Asian tourism flourishing in Egypt, can it afford racism?

It seems almost at odds that racism and racist attitudes towards Asians could fester in the country considering Egypt’s close political and economic relationship with both China and various Asian nations.

At the start of the outbreak, Egypt supported China in the management of the outbreak by providing supplies. On 2 March 2020, various historical sites in Egypt were lit up in ‘red’ to feature the flag of China in solidarity with the Eastern nation which has been battling the coronavirus pandemic.

“Egypt illuminates the facades of Salah El-Din Citadel in Cairo, Karnak temple in Luxor, and Philae Temple in Aswan in red, the color of China’s flag, as solidarity from the Egyptian people with the Chinese people to confront coronavirus,” read a statement Ministry of Tourism and Antiquities.

Indeed, Chinese tourists have grown to make a large part of the influx of tourism to the country. According to Chinese official statistics, half a million Chinese tourists visited Egypt in 2018, as per Chinese outlet Xinhua. Moreover, Egypt is a popular travel destination for Japanese tourists as well, with Japanese governmental bodies such as the Ministry of Culture heavily involved in financing and developing various national projects such as the Grand Egyptian Museum’s conservation center for a soft loan of US$ 392 million.

The influx of Asian tourists, compensating for the more hesitant European tourists especially following the 2011 and 2013 political instability, was a key factor in the revival of Egyptian tourism and would be, in the case of a normal return to operations, much sought after.

It is only a matter of time before we will see whether the racism and discrimination that some members of the Asian community have faced while manoeuvring the outbreak’s consequences will leave an ineffable impression of a nation many almost called home.