Around the world, high school and college graduates have had their celebrations halted because of the COVID-19 precautions. In universities like King’s College London and the University of Toronto, graduation ceremonies were cancelled early on back in March. However, in many institutions around Egypt and the world, commencements are postponed until an unknown later date, leaving students in limbo without closure on their achievements.

While many students are waiting for their “real commencement”, some have chosen to celebrate in new and untraditional ways while staying safe. Others have felt like no celebration they hold at home will compare to the real in-person celebration. Mayar El-Bendary, Chemistry graduate from The American University in Cairo (AUC) told Egyptian Streets that while she did not have a major celebration, a few friends came to her house with balloons to celebrate.

“It felt like no matter what anyone did for me, I would appreciate it so much and I’d be happy that they want me to have a taste of the celebration, but I would still feel like something is missing. I want to go to my commencement, take pictures with my family and friends and receive my diploma,” El-Bendary said.

Nada Mohamed shared similar sentiments. The Integrated and Marketing Communications graduate from AUC shared that she only celebrated with her family when they held a small surprise celebration for her.

“That was super sweet obviously, and it showed they care but it also reminded me of what I really missed out on. I still reminisce over my excitement for [the] cap and gown [celebration] and graduation and had outfits prepared and all. Graduation feels like a sort of reward that motivates you to move on to the next stage, and I felt I was stripped of that,” Mohamed shared.

“By the time I was officially graduating, my entire family had contracted the coronavirus so I couldn’t really celebrate,” Salma Hisham, AUC Multimedia Journalism graduate shared.

For Hisham, even a smaller-scale celebration at home became difficult, but she has hopes in celebrating in the future.

“But during my graduation project presentation, which was done online, my family brought me this graduation hat and had a mini celebration with them and my friends, nothing too fancy but I’m waiting on them to do something else to celebrate me properly soon,” Hisham said.

Other students decided that they would make an effort to get dressed up and mark the time of their graduation with photographs.

“My friends sent me a graduation package with balloons and pictures of us together with a letter about having a bright future, that was cute and made me excited to dive into new opportunities,” Political Science AUC graduate Leila Gemei said.

Gemei shared that her group celebration with friends felt a bit like graduation because she celebrated with the people closest to her, though noting that it would have been better if she got to celebrate with other graduates.

Communications and Media Arts AUC Graduate Nour Tobgy celebrated similarly with a small group of friends. Her intention for celebrating was very specific; to mark the moment of her graduation in time as a milestone.

“I thought I need to solidify this moment, something needs to change. I need to feel like I’ve achieved something. But still, I feel like my high school graduation is more exciting to look back at than my university graduation,” Tobgy said.

She was one of many students Egyptian Streets spoke with who shared that despite the smaller celebration, she feels it did not sink in yet that she graduated.

“So far, I’d rather be called a student than an unemployed graduate, so I’m just taking it a day at a time,” she added.

Small gatherings with friends seem to be the most popular way to celebrate commencement this year, despite them not being as fulfilling as the larger celebration to many.

“Having a small celebration with friends is cool, but I’m still waiting for the actual thing. I feel like I missed out, like I got robbed from my graduation ceremony,” AUC History graduate Mohamed Youssef said.

The students aren’t the only ones missing out on the celebration, though. Graduation, whether from high school or university, is a moment many parents wait for patiently to see the growth of their children.

“I feel for my parents. They were waiting for the graduation as well, because the ceremony was kind of the culmination of my university experience. They wanted to see me with the cap and gown and everything, but they didn’t,” Youssef added.

The Internet Bridging the Celebration Gap

Since the start of the pandemic, many have found alternative ways of connection through the internet. One of those people was Hayah Academy High School graduate Ali Kandil who shared that he celebrated his final results on Discord, the popular social media communication platform.

“My whole friend group was all on the server on a call. Then, every time our International Baccalaureate coordinator calls someone [to tell them their final result] he mutes and texts us ‘She called me guys’. He picks up, gets his grade, and then unmutes and tells us he got a great grade and we all celebrate. And we all got called back to back so we were all scared and excited. It was intense waiting for the grades but the companionship made it all better,” Kandil said.

Similarly to Kandil, University of Toronto graduate Aamenah El Sherif had anticipated a large celebration after many difficult years of hard work.

“Honestly, the fact that the graduation itself got cancelled really pissed me off, I spent a long time trying to get over it. But I was really upset because this was my only win from my university and it was taken away from me,” El Sherif said.

Despite the disappointment, the Economics and Psychology graduate found upsides to a rather unfortunate situation. She found that her friends tried to make it up for her and celebrated her on multiple occasions.

“My friends from Egypt did a Zoom grad for me and that was actually really cute. They had sections, presenting me, then a video, then ranting about my university. It made me feel really good that because of that a lot of people really tried to make it up for me, whether here [in Toronto] or in Egypt. I had at least 4 different celebrations and I felt like this wouldn’t have happened if there was a traditional graduation,” El Sherif added.

Nearby in Montreal, Computer Science graduate Omar El Banna had a lot of life events going on, including moving away from university, that he was not able to celebrate properly. On the contrary, the McGill University graduate did not necessarily feel moved when his convocation was cancelled.

“The overall theme of my feelings was a massive disconnect, driven by the fact that classes got cancelled so abruptly and before we knew it, we had already experienced our last class without realizing,” El Banna said.

He shared that at certain moments, he felt at peace like a ‘real university graduate’ but he feels that he missed out on having the sense of pride that McGill graduates have because he missed out on graduation.

“Lots of people had to move away, like I did, and for me that’s alienating the university more from my memory. I can’t imagine what it would be like going back now,” he added.

More recently as the pandemic was slowing down in some places, graduation ceremonies have started taking place similar to tradition before the pandemic. In Istanbul, Farida Ezzat was concluding her years studying Medicine at Altınbaş University. Her university opted for an open air celebration instead of a ceremony in a theatre.

“Our faculty organized a graduation dinner in a hotel’s garden. Masks were compulsory and social distancing regulations were imposed (although halfway through almost no one complied). We had the caps and gowns and our names were called one by one as in a standard graduation ceremony, but it was brief. Sanitizers on every table,” Ezzat said. 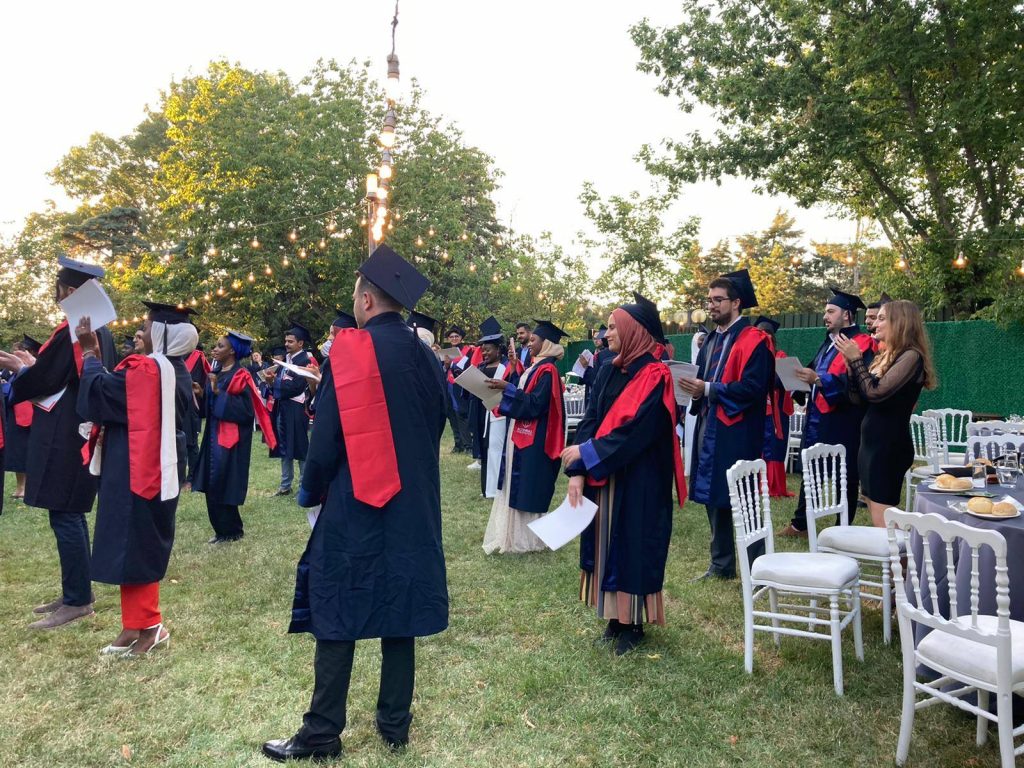 Despite the worries about the virus, Ezzat shared that with the celebratory mood, no one cared, and the celebration was enjoyable.

Nada Omar shared her experience attending her sister’s High School graduation at Capital International Schools, which she described was the same as what she expected before. Despite frequent cancellations and postponements, the school held an indoor ceremony at the end of July, which was a relief to Omar and her family.

While there were sanitization gates at the establishment, and masks were mandatory, Omar said that not everyone was strict with wearing them inside.

“The celebration was really nice though, it felt the same honestly, and it felt like a real celebration,” Omar said.

Regardless of how graduates decided or were able to celebrate their hard-earned achievements, the graduation season of summer 2020 was unlike any other season before. If anything, graduates have become more creative in celebrating, and more appreciative of the age-old traditional ceremonies.