Nested in the heart of old Cairo, this historic souq, famous for its animated streets, mamluk landmarks, and scores of tourists and locals, is in the midst of an economic drought after almost three months of shutting down due to COVID-19.

The 700-year-old market is home to traditional coffee shops and Oriental restaurants that have written their own history, some cemented there since the late 18th century.

At the front entrance of the bazaar lies El Dahan, a restaurant packed next to many others that have seen Khan El Khalili manifest and change over several decades. Operating since 1971, El Dahan is an integral marker of the souq, offering oriental food and Egyptian cuisine, becoming a famed hotspot for those looking for an authentic experience.

Now managers stand in front of their eateries with menus glued to their hands, badgering pedestrians to their emptied tables.

“Despite the 2011 revolution and the severe threat of terrorism from 2013 to 2015, this has been ultimately the worst situation for our business,” says Ahmed Sherif, manager of El Dahan, to Egyptian Streets.

Small, clustered and made out of reused furniture, the restaurant is one of many that reflects the generations worth of family owned businesses that drive the market.

“I’ve been here for over 32 years, and I haven’t seen anything like this,” Sherif says as he recalls his first day working at El-Dahan, standing on an empty Pepsi case as a young boy washing dishes.

Compared to commercially owned industries that shine across from the historical hotspot, the price for a meal is cheap, costing around 200 L.E. (US$ 12.72) to feed almost a family of four.

“Before the virus I had 10-hour shifts a day starting at 10 a.m. to 8 p.m.,” the manager explains, recounting when El Dahan used to operate pre-COVID-19 for almost 24 hours. “My partner would take over at 8 p.m. and end his shift at 4 in the morning. Now I work every 10 days, which means my salary has been cut in half.”

The father of three said he hasn’t paid rent for over seven months, with threats of his electricity and water going out almost every day due to unpaid debts.

“This didn’t happen over years. I was comfortable and secure, and in three months, I found myself with almost nothing,” he laments.

Sherif pulls out a few pieces of paper from his front pocket with 50 L.E. (US$ 3) rolled in between, each sheet was the receipt from last night, tallying up to three customers in his shift. “Those 50 pounds, that’s all the owner made yesterday, and that doesn’t begin to cover expenses.”

Bounded by Al-Muizz street to its west, al-Muski Street to its south, with Al-Azhar University and Bayn Al-Qasrayn surrounding its district, Khan El Khalili is Cairo’s historic centerpiece and the pinnacle of its tourism.

“Look at the street,” he says, pointing to the momentous square in front of the El-Hussien mosque that lies west of the market’s borders “in all my years, I’ve never seen it so empty.”

The café and entertainment industry is taking a new hit

On the long strip of cafes that light up the souq’s unnaturally dimmed alleyways, oriental music can be heard ringing from a small four-person band, hopping from coffee shop to coffee shop, entertaining customers, and making their income mostly through tips.

“We used to be here all night,” says Ahmed Zakaria, who plays the tabla, “entertaining people all over the world, getting a great amount of tips, sometimes in US dollars. Now I barely go home with a 50 pound note.”

El-Fishawy, a café where the esteemed and late novelist Naguib Mahfouz brought pen to paper, and an area once notorious for its long lines and claustrophobic spacing, now sits nearly vacant. 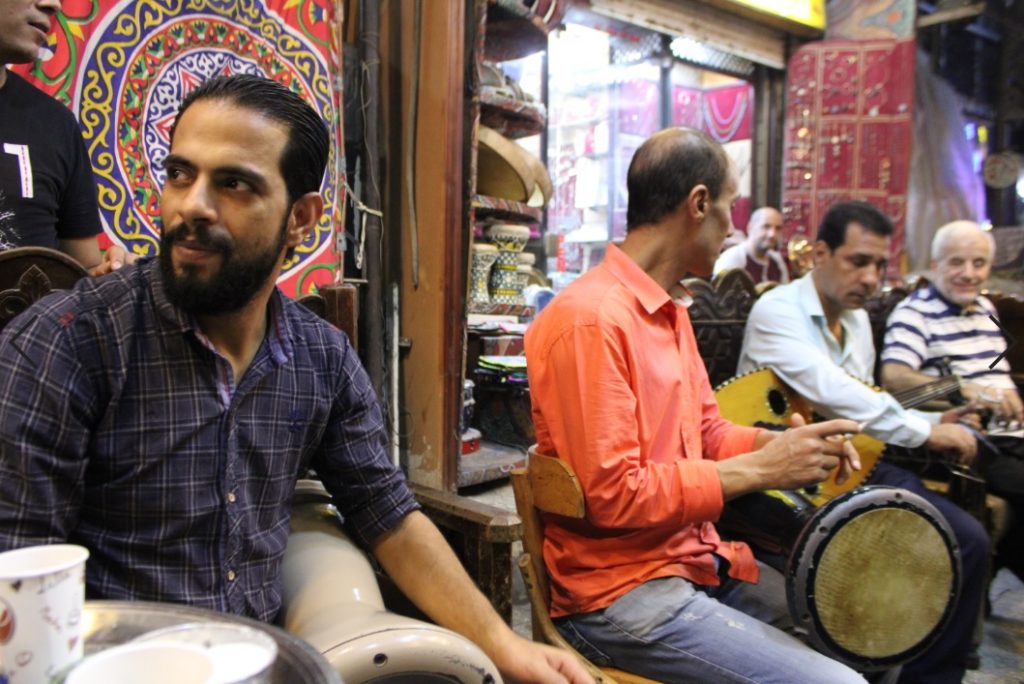 Zakaria, who was finishing off his shift there, recalls the café manager struggling to make room for the lines of people waiting to be seated. “I used to only play for ten minutes per table, because I wouldn’t have time to get to everyone. Look around now, there’s no one here.”

Instead of his usual 10 minute shows, Zakaria and his four-person band perform for over 30 minutes to the small trickle of customers at El-Fishawy, making half of what they used to before the pandemic.

“My marriage is ruined. Everyone I know who used to work here has sent their wives back home to their families because they can’t afford to provide for a household anymore.”

With no education and an autistic son to take care of, Zakaria says he’s in a difficult position with only his drum and the hope of a renewed economy to rescue him.

Merchants call out to empty streets

Outside the line of coffee shops is the eerily quiet El-Gamaleya Street, a once vibrant and noisy alleyway packed with people, now stands with police officers at almost every corner.

“By 10 p.m. exactly you could hear every store closing up,” said Mohamed Hussein, manager at an antique store. “That used to be prime hours for customers.”

New rules were set in place after the pandemic hit Cairo, some more regulated than others depending on the area. By 10 p.m. all shops and stores are expected to close and with police presence now surging, Khan El Khalili locals have no choice but to follow suit.

“I never thought I’d see the day where I’d leave this place before sunrise,” he says, adding that new hours of operations almost cost him his business.

“My salary’s been completely cut and I only get paid through commission and with the way everything’s been that’s not enough to feed a family,” he explains. In a move he thought would be essential to his family’s survival, Hussein pulled out his eldest son, Ahmed, from university and got him a job in the store in front of him.

It is not just Hussein who’s struggling to keep his shop open, store owners are barely covering their costs, with several of them shutting down permanently since their reopening in late June.

“But with the way things are going,” Hussien says, “I am afraid that we’ll be next.”

Now six months into the pandemic, Khan El Khalili has only begun to rally up customers to save its small businesses from completely shutting down. But with the Ministry of Health warning of a second wave knocking on Egyptians’ doors, the fate of the bazaar is still at risk.

A Tale of Two Feelings: Grieving During the Joyous Holidays