On 26 December, Cairo Jazz Club (CJC), a prominent bar with two locations across Cairo, Egypt hosted an event, despite the rise in COVID-19 cases in Egypt, a North African band based in Cairo, performed at the event that included an excessive number of people.

A source, who has chosen to remain anonymous and has attended the event, told Egyptian Streets that there were roughly 50 to 70 people at the event. Egyptian Streets has reached out to CJC for a comment. However, they declined. This was their response: “As for speaking to a representative, we are not interested in doing any interviews at the moment, thank you. Have a nice day.”

The Egyptian government has been advising people to implement the necessary precautions to avoid a complete lockdown similar to what happened in the earlier months of the global pandemic. In addition, there has been a recent increase in COVID-19 cases, and therefore, it is even more surprising that a party was held as if these were normal times.

These are anything but normal times.

CJC has two different venues: the first and oldest venue is a small indoor-only space in Agouza. The other location, CJC 610 in 6th of October City, provides both outdoor and indoor spaces. The event in question was hosted at CJC Agouza, their smaller indoor venue. Videos and photos on social media, including Instagram, of the event illustrate that precautions were not implemented, with an excessive amount of people partying and crammed in the small indoor space.

At a cabinet meeting on 12 December, Mostafa Madbouly, Egypt’s Prime Minister, announced the cancelation of New Year’s Eve celebrations and gatherings due to the spike of cases. Moreover, on 27 December, Madbouly chaired a meeting with the Supreme Committee to discuss the management of COVID-19. In the meeting, they affirmed the decision to cancel all celebrations on New Year’s Eve and to take measures to shut down any establishment that organizes any celebration of any kind.

Even after the 12 December announcement, CJC 610 posted an announcement promoting their New Year’s Eve party on their Instagram page. Despite the confusion of a few people in the comments section of the post, it appears on the Instagram post that CJC 610 employees were quite confident that they were going to host this party. The post was later removed because the venue canceled the event. 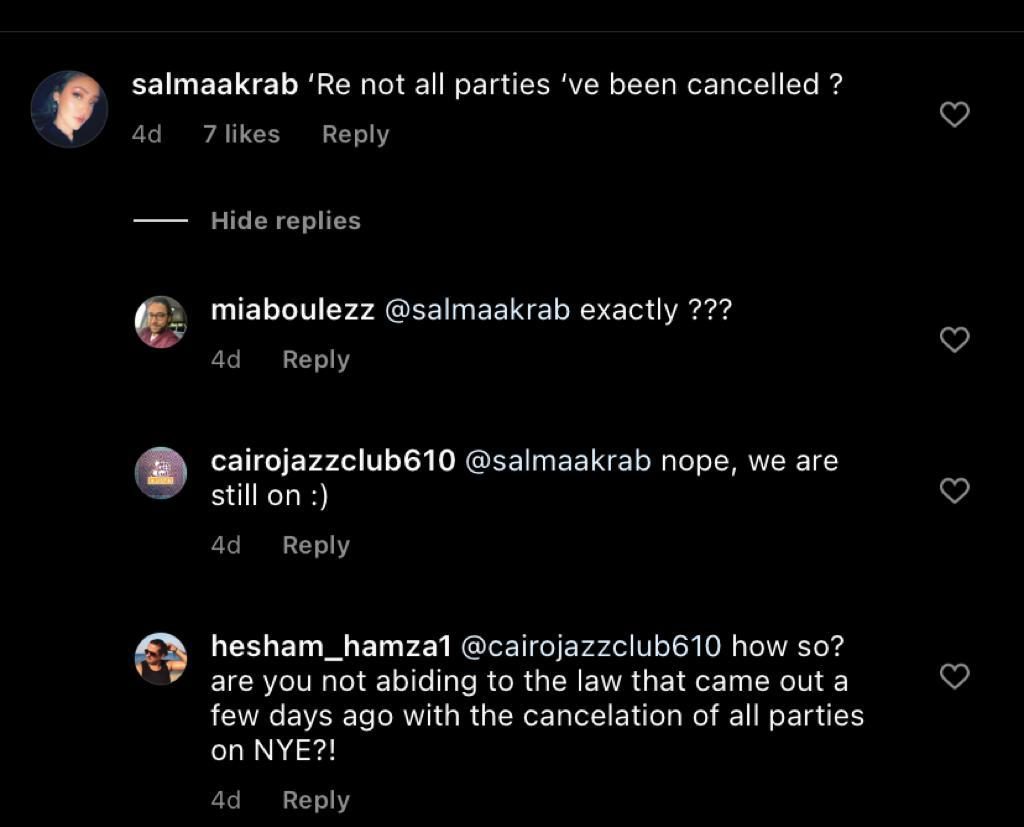 According to an article in Gulf News published on 19 December, the Egyptian government has already implemented several new restrictions, including banning indoor mourning ceremonies and weddings. Thus, it is unorthodox that CJC hosts an event of such nature with utter disregard to the necessary COVID-19 safety protocols.

In another article, published in Ahram Online, during a press conference held on 8 November relating to the confrontation of the second wave of COVID-19, Egypt’s Minister of Health and Population Hala Zayed urged businesses to allow employees to work from home, if possible, and for restaurants and cafes to implement the recommended precautionary measures to avoid their businesses being shut down for three days. This mirrors the precautions that were implemented in March and April when cases were also increasing.

It feels like Egyptians have forgotten about the pandemic and are choosing to look the other way. CJC is not the only entity that has been hosting indoor events with utter disregard to any safety protocols. On 18 December, pals., a community of event organizers, hosted an event similar to CJC’s.

Pals. and CJC’s actions show us that they refuse to live in the reality of this pandemic and are indifferent to all the health workers who are working tirelessly, day in and day out, while putting their lives in jeopardy to help other people. Their actions are screaming to the world that they are indifferent to everyone who has lost someone during this time and to everyone who is fighting for their lives because of their reckless and selfish choices. People who have attended the event are giving the same message of indifference to the health workers and to anyone fighting for his or her life.

Even if the government has not banned us from hosting big indoor gatherings, and even if private bars, nightclubs, restaurants, cafes and shops are allowed to operate, we should still do our part and take all the necessary precautions as advised by the health experts who have been studying COVID-19 tirelessly for almost a year. This is how we protect each other. We have to do better.

CJC’s blatant disregard for its community has potentially put people’s lives in danger. Even if an organization of any kind decides to be reckless simply for personal gain, as a community we should not follow this example. In this case, CJC hosted an event during a global pandemic. However, the event would not have been possible if Rai-نا had not agreed to perform and if people decided not to go.

‎*The opinions and ideas expressed in this article do not reflect the views of Egyptian Streets’ editorial team or any other institution with which they are affiliated. To submit an opinion article, please check out our submission guidelines here.

An Egyptian native, I completed my bachelor’s degree in journalism and mass communication from Samford University in Birmingham, Alabama in 2016 while playing division one tennis for the Samford Women’s Tennis team. Two years later, I was selected for the dual master’s program in journalism from Ohio University and global mass communication from Leipzig University in Germany. My academic area of research centers on the history of war correspondence (specifically female correspondents), war trauma and media censorship. My professional experience includes freelance local newspaper writing (in the U.S. and in Egypt), magazine writing and PR work. I have worked as a freelance journalist since I graduated from college. My love of writing stemmed from my experience as the sports editor of my college newspaper. I have returned to Egypt to work as a journalist to cover local news. My goal is to eventually work as a foreign correspondent in the Middle East and to teach journalism and historiography at a university. I want to write stories that will make a difference.