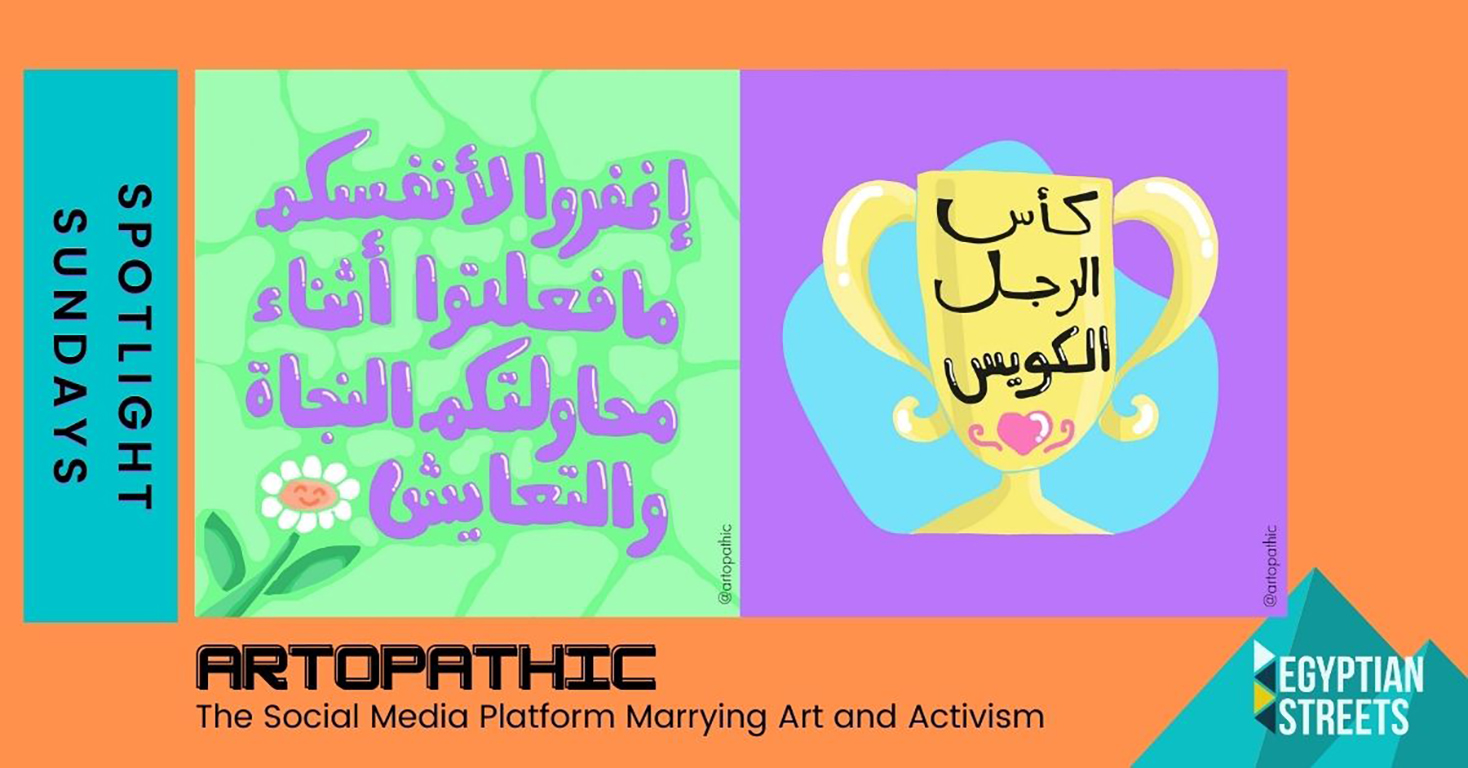 At first glance, the bright colors are what seem to grab attention. Moments later, one will find themselves lost lingering over a multitude of powerful messages communicated through these vividly colored visuals.

Artopathic is one of the few Egyptian social media platforms to bring to light a refreshingly new form of ‘artivism’ to Egypt; combining artwork with activism, as the platform gives voice to various feminist issues in Egypt, from gender discrimination to sexual harassment.

“I tried to transform my anger and pain into art that would inspire others & have an impact on us collectively,” explains Illustrator and Visual Artist Dina Zaitoun, founder and illustrator of Artopathic, “I started actively sharing art, especially about feminism and sexual harassment in July 2020, when the ABZ (Ahmed Bassam Zaki) case was brought to light.”

Indeed as social media has played a vital role in recent months with spreading awareness over issues of sexual harassment and women’s rights in Egypt, it has led to an inspiring wave of women-led platforms coming about and boldly addressing these issues in a variety of ways. From Assault Police to Mother Being and so much more, social media platforms such as these have both managed to reach a wider audience through their use of both English and Arabic content, as well as encouraging others to do the same.

“[Starting Artopathic] stemmed from my growing belief that everyone has a purpose, and change is possible through spreading awareness,” Zaitoun tells Egyptian Streets. Keeping in mind that these messages are meant to reach as wide an audience as possible in order to be as effective as possible, Zaitoun has opted to articulate her messages in Arabic.

“Whenever I make an illustration that discusses an important issue, I feel that society was waiting for it,” the 34-year-old illustrator reflects, “People are willing to learn and gain awareness. Speaking out is one of the most effective ways to raise awareness for the betterment of our society, and starting a conversation is crucially important.”

The engagement on Zaitoun’s platform thus far, has proved the need for platforms such as these to exist. She goes on to express her belief that art is a great medium for conveying messages, as visuals partly rule the world we currently live in.

Using art as activism in fact, has always been a part of history. Essentially, the whole idea of art is expressing what one feels or goes through in everyday life; giving these experiences new meaning and new perspectives. One of the most well-known examples of artivists in our time for example, is Banksy. This anonymous artist has been effectively stenciling thought-provoking graffiti since the 1990s.

“I was influenced by many artists, but Banksy and Aya Tarek are at the top of the list,” Zaitoun says. Openly addressing such sensitive issues in Egypt however certainly comes with it challenges as well.

“I get attacked a lot, and sometimes insulted and threatened, I even got my instagram account disabled twice,” recalls Zaitoun, “I’m trying to learn that this is not personal, and that I need to keep going because this reaction means my message and impact is growing as well.”

Although speaking out against issues of gender and sexual harassment in Egypt is still somewhat taboo and may come with various forms of backlash, it is motivating to have women such as Zaitoun and so many others, stand their ground and continue to try to educate and bring about thought-provoking content to Egyptian society.

“I would love to continue making art that spreads awareness, helps people heal, and invokes a discussion.” Zaitoun tells Egyptian Streets, “It is amazing how social media can help amplify a message beyond borders, and having a larger reach means more people seeing my art and hopefully getting positively affected by it.”

7 Independent Design and Architecture Firms in Egypt Offering Unique Styles
"It's Never Too Late to Start Something New": Bassem Youssef on the Egyptian Streets Podcast