The role of the first lady has been continuously evolving, yet it remains to be a role without a clear identity or rulebook, and no real understanding of its importance, impact or contribution to the politics of a nation. As former First Lady of the United States, Laura Bush, once noted, “the role of First Lady is whatever the First Lady wants it to be.”

Seen as merely the ‘feminine window dressing’ to the presidency, the first lady has always lived in the shadows of her husband. Historically, she has been associated with that of a hostess who greets guests and simply attends events with her husband. Fulfilling her function as a ‘good wife and mother’, she became more of an image – a portrait hung on the walls of the presidential palace, but not a voice that is heard or read in history books.

Today, this historical role is gradually expanding as the role of women in society is also changing. Since political leadership is also a symbol of society, it would be hypocritical for presidents to advocate for women’s rights while their wives remain completely excluded and absent from the public eye. Even when they’re given a more visible role, it is usually to bolster a president’s image or perform stereotypical gendered roles that continue to objectify the agency and voice of first ladies.

Setting her own lifestyle as a model for other American women, numerous articles have been written on Michelle Obama’s power to embody ‘authentic’ leadership, and how she represents the ‘nation’s conscience’ and acts as the ‘most earnest guardian of the most important values’, as Frank Bruni notes in his New York Times article. Her authenticity illustrates her real power as a first lady – she speaks when she wants to speak, acts when she wants to act, and advocates for the policies and issues she truly cares about.

Ultimately, the power of the first lady comes down to her role in making other women visible and embodying a real and authentic character instead of a fabricated persona that merely boosts the president or a political regime’s image. Her visibility plays a role in redefining the way society perceives a married couple as a partnership, and even more so as an equal relationship. What is important to highlight, however, is that feminist revolutions do not begin with presidential wives, but presidential wives carry the power to listen to women’s voice, bring women to the forefront, and back the nation’s feminist voice.

In Egypt, Jehan Sadat was the first to play a more visible role as a first lady – paving the way for more women to fill in that role. Yet over the years, following Suzanne Mubarak, this role became more controversial as it became more tied to the state than the woman herself, which outweighed the real value and importance of the role.

As a professor and peace activist, Jehan Sadat’s authenticity in her leadership is most evident in her autobiography, A Woman of Egypt (1987). She delves more deeply into her own personal life and views, and truthfully expresses her opinions on gender inequality and how she was brought up in a time that confined women’s role to marriage rather than a professional career.

Jehan Sadat’s own career is what builds for her a character that is independent of her husband. Before she became a first lady, she began her advocacy for women’s rights by condemning female genital mutilation and helping local women become economically independent from their husbands.

When Jehan Sadat earned her master’s thesis from Cairo University in Arabic Literature in 1980, she insisted on defending her thesis live on television despite the fact that she was met by protest. At the time, she was reported to have said, “I want my defense on national television because I want the women of Egypt to see a man asking a woman a question and a woman giving the answer.”

While charity and social service are traditionally female roles, Jehan Sadat nonetheless set a new standard in becoming more visible in the public eye; she advocated for issues that were seen as controversial at the time, such as issuing decrees that improve the divorce status of women, as well as a second law that provided 30 seats in parliament for women. Advocating for these controversial issues in the context of a conservative society in the 1970s illustrated just how much the role of a first lady is much larger than simply being the president’s wife, and that presidential leadership is not exclusively defined by a male voice. 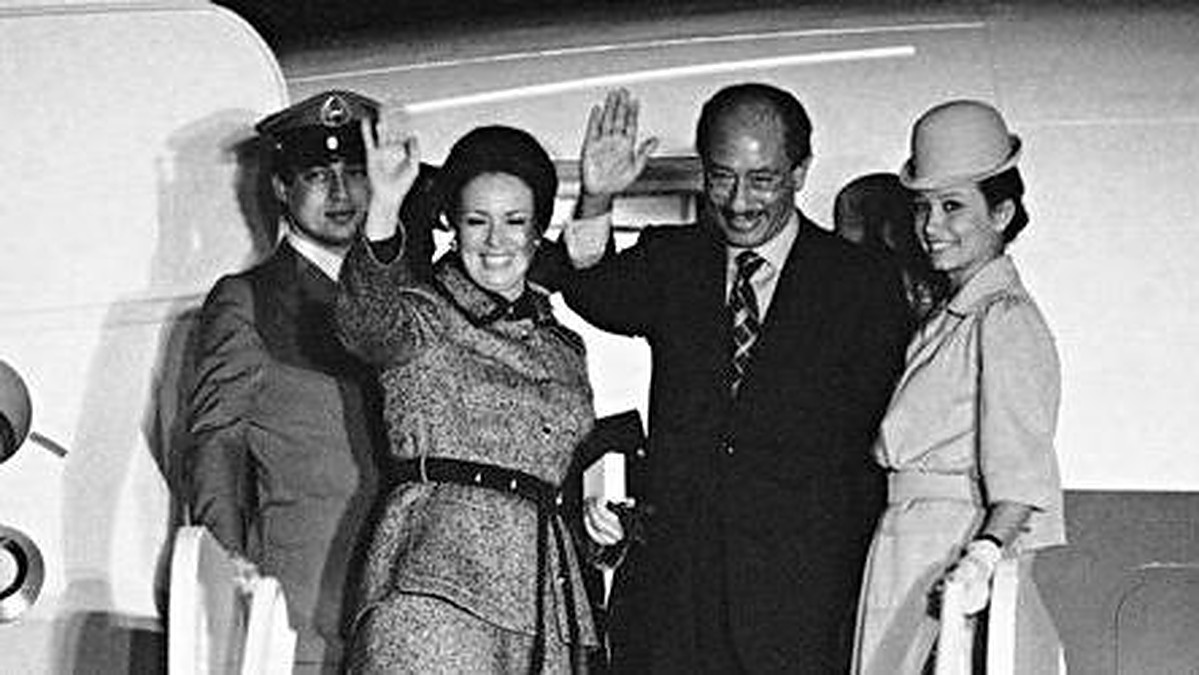 Jehan Sadat’s own advocacy also stretched beyond the borders of Egypt. In her book ‘My Hope for Peace’, she does not just focus on her husband or politics, but also explains what it really means to be a Muslim woman against the backdrop of the misconceptions that the West had on Islam at the time. She debunks myths that Islam is antithetical to feminism, and allows readers to observe a more personal account of life as a Muslim woman.

Using her voice to speak to the outside world on what it means to be an Egyptian Muslim woman, Jehan Sadat did not just change the world’s views on Muslim women, but also presented a real and authentic attitude to her public role as a first lady. Not as an image, nor as a shadow or a portrait, but as an educated activist and writer that has a message to say and send across.

Echoing and responding to the events that were happening in her own lifetime, former first lady Suzanne Mubarak was also vocal about issues that were deemed controversial, such as family planning and mother’s rights in child custody. However, Mubarak’s role became more controversial towards the end, as the spotlight was directed at her and the state, rather than other women or feminist organizations. The controversy drew the line. It revealed the limits and what people expect of the first lady in Egypt, and underlined the importance of the first lady to put other women at the forefront of her efforts.

The question that remains is whether this role is going to be actively revived as the social context changes, with increasingly more women entering the workforce and gaining more rights. Not only that, but also whether the public will continue to accept such a visible and public role of a first lady, and one that can go even beyond issues that are often related to women, such as children, health, women’s rights, and culture.

President Abdel Fattah El Sisi’s wife Entissar Amer was absent from the public eye until just recently, where she appeared as a guest alongside TV presenter Issad Younis on DMC. In the episode, she mostly spoke about her personal life and how she met the president, as well as how they managed their new responsibilities after taking public office. She is also now more active on social media, and has celebrated events such as Egyptian Women’s Day by awarding other women in society.

Yet, to what extent will we see more of her, particularly as the role of the Egyptian woman continues to evolve? And will she continue the legacy of Jehan Sedat, or pave her own path? There is still so much more to be done for women’s rights in Egypt, but in our context today, the first lady can no longer be just a ‘good wife and mother’ – she is also a voice.