From brittle beauties that can withstand the trial of fire, to thick ornate vases: there is nothing, it seems, that cannot be made within a glassblower’s workshop. At the heart of it all is the oven: a fiery, glorious pit where most of the magic happens. Heated to 860 degrees celsius, this is where glass is melted, made, and blown.

The earliest recorded glass-like glaze was found in Egypt, presumably by the Badarian civilization in 12,000 BCE. Though it appears in nearly every culture today, in all of its shades, the oldest clear glass was initially a deep royal blue. The composition hasn’t changed much over the years, with silicate of lime and copper, traces of iron to color.

The largest and earliest glass-blowing factory was at Egypt’s Tall el-Amarna, in 1400 BCE, where “a great variety of colored glazes were made for wall decoration and personal ornament.” Since antiquity, Egyptians have not only perfected the art of glass-making but developed a sophisticated culture of color and reflection surrounding glass. 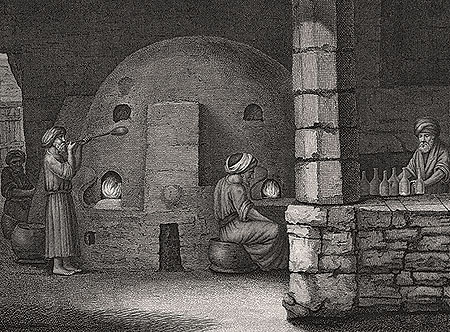 The invention of glass-blowing itself originated in Syria, during the first century, and revolutionized the splendor of glass creation across the region. Seemingly ubiquitous, traditional glass-making is an overlooked skill. From ideal temperatures, to hand chosen material, to the patience of failing once, twice, thrice – glass-blowers are undervalued heroes of innovation.

Much like their history suggests, Egyptians have an innate, love-heavy relationship with art and glass. Today many of the workshops in Egypt’s City of the Dead recycle material and create glass objects from otherwise discarded material. Women sort the glass by hue, take a delicate hand to the greens and the whites and the amber-glossed, before powdering it in preparation.

After which, the glass is melted in the kiln, or oven. Blue is by far the most distinctive color in circulation, much like in ancient times. Most kilns are made out of mud-brick, laid in a pinwheel or jack-on-jack pattern to create a dome. Roughly “round in shape and nowadays gas-fueled, are low structures enabling the glass-blowers to work seated on low stool.”

Drinking glasses, tableware, candlesticks, window panes: everything is made in a small, tight space. Many City of the Dead glassblowers have even managed to export their art to Europe and North America in the form of Christmas decorations. Most goods, though, remain home: in the heart of mosques, churches, and Khan al-Khalili bazaars.

“The People of Egypt Are Incredible”: Expats Tell Us Why They Moved to Egypt
Hounds & Jackals: Game of the Pharaohs

Hounds & Jackals: Game of the Pharaohs
“The People of Egypt Are Incredible”: Expats Tell Us Why They Moved to Egypt