Rania Seddik is a passionate entrepreneur and founder of the sister organisations GebRaa and Karama, aimed at reviving traditional Egyptian handicrafts at risk and supporting marginalised communities across the country.

While GebRaa increases the demand for traditional crafts through marketing and product innovation, Karama “works on improving people’s lives economically and socially, seeking to achieve economic, social and cultural development for craftsmen/craftswomen,” reads their website.

“Egyptian handicrafts need an intervention, because they are dying out,” Seddik says. In addressing this issue, she tackles development from a social, economic, and environmental perspective.

Seddik tells Egyptian Streets that the decline of traditional handicraft products results in multiple crises, most prominently in “a problem of dignity. We only copy others, so we need to go back to our history and be inspired to develop our own traditional crafts.”

In Seddik’s experience, supporting the pursuit of traditional handicrafts has taught people “who they really are” and helped to preserve Egyptian cultural heritage and community identity.

Seddik further explains that handicrafts as cultural products result in the creation of jobs and can have a strong economic impact.

“People don’t have to emigrate abroad. They can work in workshops and don’t have to commute to factories. It allows them to live in dignity,” she says.

Strengthening local produce encourages reliance on green supply chains through environmentally friendly methods of production that leave little to no environmental impact from the raw material to the end product. Traditional craftsmanship uses indigenous materials, such as wool, clay, or shells. Seddik maintains that “handicrafts have always been recyclable.”

Training the next generation

While GebRaa focuses on the produce, Karama supports the artisans making it by “preserving, promoting, enhancing crafts at risk, and transmitting their know-how to younger generations.”

The Foundation has recently run a project funded by Drosos Foundation, to revive the Egyptian inlay craft. In addition to training 30 young people, they also work to increase the income of inlay workshops by improving their capacity and renovating their workshops. The goal is to open new markets for artisans inside and outside Egypt, and to help them participate in exhibitions and design competitions.

All training places a special emphasis on empowering marginalised members of the communities, such as women, underprivileged children, and disabled people.

They use a holistic approach which involves cooperating with psychologists and social workers, to offer their trainees full support. Their work has taken them around the country into vocational schools and slums, helping children earn money through the craft they learned, and consequently being able to attend school.

One of their projects is reviving the ancient Egyptian board game Senet which is allegedly the longest played game in the world. Word of mouth has it that people have been playing it for over 3000 years. Apparently, it was once popular to the extent that it was played with the deceased, as a gift from the living people to the dead.

In Karama’s community school project, children were invited to re-invent and reproduce Senet. After researching its history, they created their own versions of the game. Karama helps them to organise tournaments and sell their product. 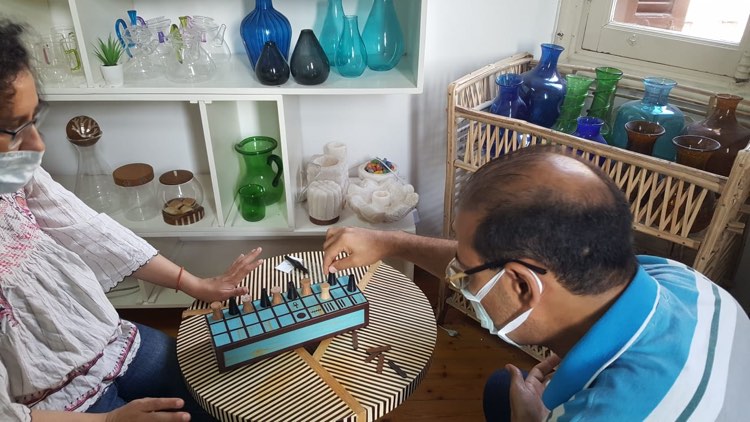 Women’s empowerment is an important focus in both GebRaa and Karama’s work, because most “investment schemes are tailored to men not women. They are overly confident while women suffer from imposter syndrome.”

As a female entrepreneur, Seddik struggles with this herself, saying that in business, “women are not well-respected or taken seriously.”

Most traditionally female handicrafts, such as embroidery and fabrics, are made of cheaper materials than men’s crafts. Consequently, women generally earn less money for their work.

“Crafts made of copper and wood are male-dominated,” Seddik explains. “So we want to get women into traditional men’s crafts and give them access to these supply chains.”

Karama’s vision is to help create “a world where people are celebrating each other’s cultures and taking pride in theirs. Where marginalized local communities are economically and socially empowered through conscious customers.”